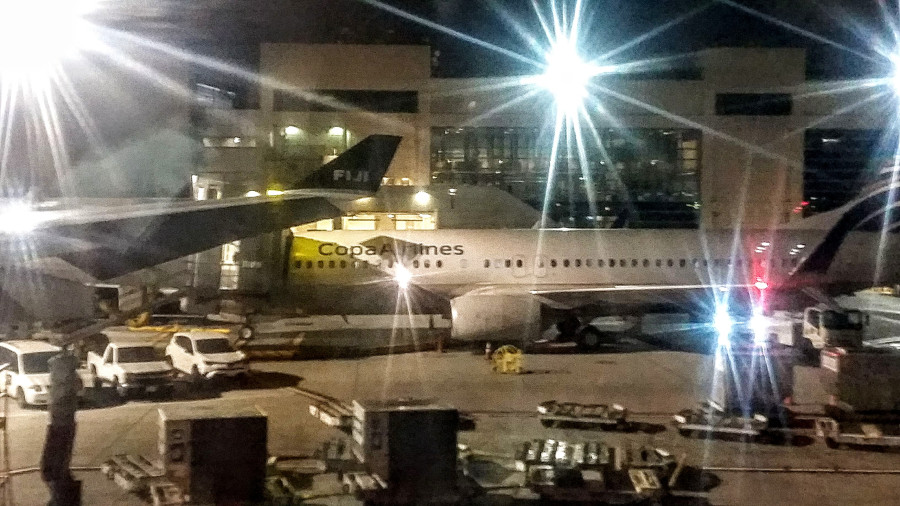 Well, Panama was for two four hour layovers or so, so I didn't get out of the airport. What I _can_ report is that the airport has no restaurants within the terminal. I think there's one or two of those places with no sitting room that sells overpriced flimsy sandwiches from refridgerated shelves that are probably manufactured offsite in a factory, but whereas most airports have one of these places every three and a half gates I think there was only one in the entire international terminal. Weird. COPA, the Panamanian airline, was fairly alright, though sometimes their reminder emails were only in Spanish. The meals were actually surprisingly good. Each flight I had a main meal which was fairly alright and a roast beef sandwich as a "snack" which was actually a really good specimen of itself. Movie selection wasn't great. These days looking at all the other TVs everyone has been watching the new tomb raider. I had watched 80% of it on an earlier flight and wasn't enthused enough to try to find where I left off (most of these seat-back entertainment systems you have to manually fast forward at 4x time through a whole movie to get to where you left off which usually isn't worth the trouble). It had taken me a bit to get used to this re-imagining of Tomb Raider where the protagonist does NOT have enormous breasts as her primary attribute, and also isn't filthy rich, though then I realized its supposed to be a pre-story of before she becomes filthy rich and Angelina Jolie.
When I booked my flights I had had the option to select my seats. On the first airline I selected a window seat in an empty row near the back, 29A. On the next leg (it was LAX-Panama and then Panama to Dominican Republic) 29A was also available so why not, and on the next leg oh hey why not 29A annnnd basically on all four flights I was in 29A because hey why not.

Between arriving back from the Dominican Republic and leaving again for Australia I had just about 24 hours at home. Just enough to spend some time with my parents again, lounge around half the day feeling like I had heeeaaaaps of time, and then go into a crazy panic when I realized I suddenly didn't. We had googled and discovered there was a Venezuelan restaurant in Orange County we were going to go to for dinner but it turned out not to be open so we settled for Mexican. I had a huge burrito and huge margarita, great last hurrah before heading to the land of no great burritos or margaritas :X
At LAX it was the weirdest thing, there was NO one in line for my flight at check in. I checked my watch, it was more than two hours before. I asked the check-in lady and she said "oh everyone's checked in already" like it was the most obvious thing, and Ii checked my clock again and it was indeed more than two hours before the flight. Weirdest thing. I was actually really concerned that they would pull any one of a number of tricks they've pulled on me in the past, such as raising a stink about how I had booked this flight as Kris instead of Kristofer, or wanting to see a return ticket, or wanting to see my Australian visa, or quibbling that my luggage was like half a kilo over the limit, but no, breezed right through!

I found on this aircraft there were only two seats betewen the aisle and the bulkhead, and I had the bulkhead seat as I always request. The woman in the aisle seat was already there and asked me nicely if I wouldn't mind changing seats with her husband, who was in the aisle seat in front of her. Normally I really try to be accomodating if it's in my power, even to my own mild inconvenience. But in this case I really had to apologetically decline, for me a ten hour flight is living hell if I don't have the bulkhead to rest my head against. As it happens I really lucked out because she had also put her request to the flight attendant and just before we took off the flight attendant informed her that there were some seats up forward where she and her husband could sit side by side.... so on an almost entirely full flight I had the seat beside me empty! ::pause for angels singing:: 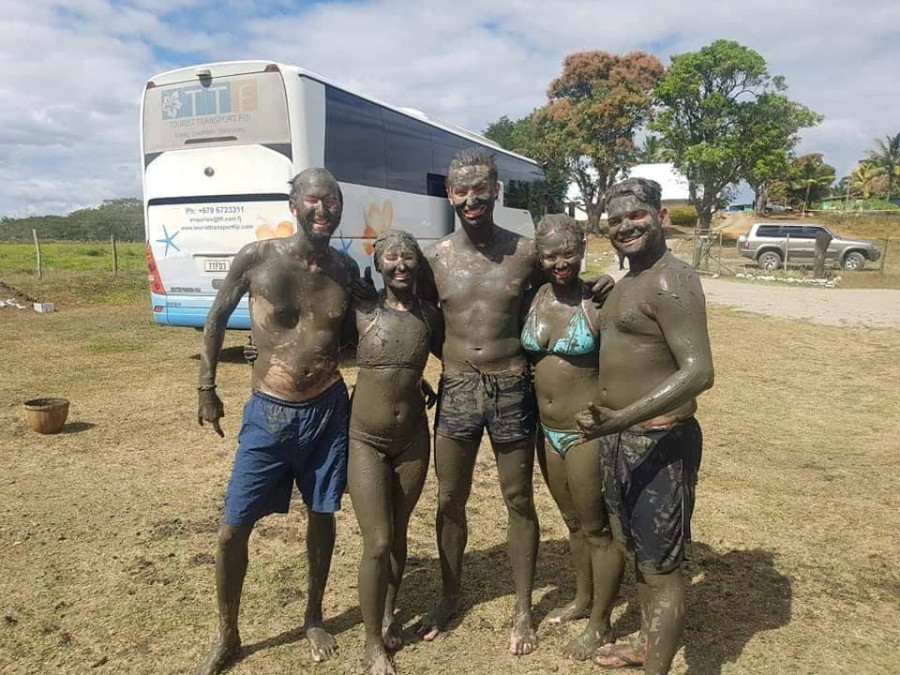 I had hit up my tour guide from last time I was in Fiji, Ravik (sp?) and so he came and got me from the airport, he had a cousin with him whom I think he was training to become a guide himself -- though the other guy certainly didn't have his charisma and I forget if he even spoke english, he was pretty quiet. I had wanted to see this waterfall I remember hearing about last time, but he said it was relatively dry right now and since it was a Sunday the villagers there who usually put on a whole thing would be taking the day off. So instead we were going to go see the central highlands or something. Were going to, but then he got a call, four cruise boat crewmembers wanted to go to the mud pools. I was by no means married to this highlands trip so I said sure lets get them and go to the mud pools! So we redirected to the marina where the shoreboats were plying between the big cruiseship anchored offshore. And get this. Remember the P & O Pacific Jewel? No of course you don't (other than (

wantedonvoyage, but it was the cruise ship way back last February that I first passed in Port Philip Bay and was then surprised to run into again on the south side of Tasmania! Here it was again! It's stalking me!!!
I hadn't quite been clear prior to their arrival that these weren't cruise passangers (are they all like 80? I had asked Ravik), but actual crewmembers. They were from the "spa department" (I think??) so not my people, deck department people, but they were young and from all over the world and living the wild carefree "I work in a cruise ship's spa department" life. We went to the mud pools. Apparently first you lather yourself with this creamy grey mud, wait for it to dry, then get in the first pool of water, which, Ii was thinking, doesn't look like a mud pool to me. But then you get in and realize the first 2-3 feet are water but below that you're wallowing in this really soft mud. I forget if this pool was also hot water, maybe? Then we got into the second pool, which I definitely remember being warmed by the natural hotspring there. And finally a third pool that was actually rectangular and tiled instead of the natural shape and look, and this one was even warmer. It wasn't cool out, Fiji always seems to be a perfect temperature in the 70s, but it was nice in the hot pools. Especially sicne I think I was still bitter the hot tub in Dominican Republic wasn't hot. >:( 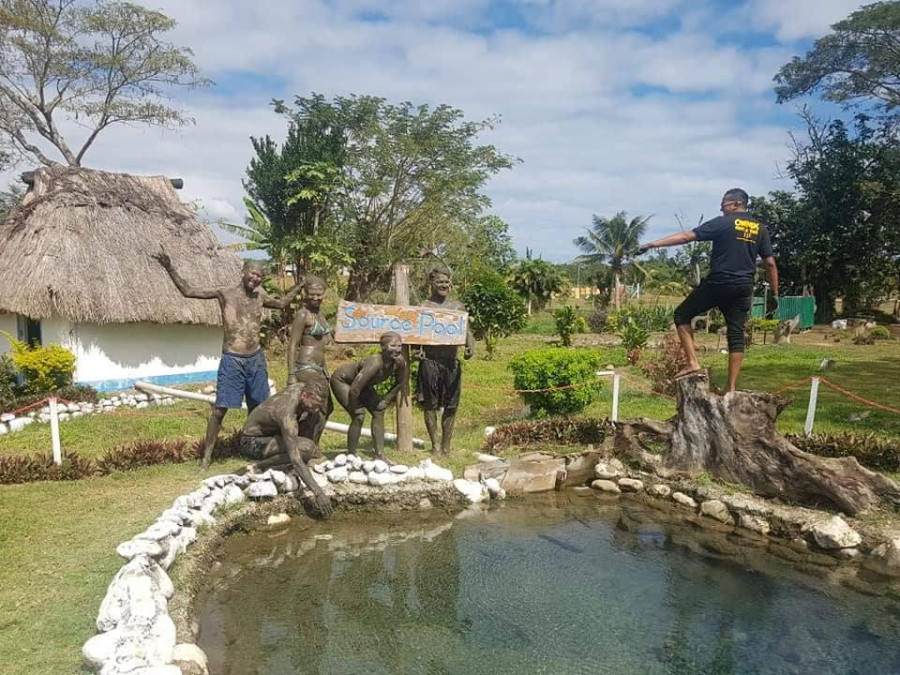 Then we went to lunch, traditional local curries ... I felt like my lamb curry was way more bones than meat. Then we returned the crewmembers to the marina becasuse they had to get back. Then Ravik asked if I wanted to try kava, a traditional Fijian drink. And after acertaining to wasn't some weird drug that will make me hallucinate I decided it sounded fun. So we actually went back to his home village, he bought some ground kava from an uncle that lived next door, brought out a traditional bowl and prepared the kava by straining water through a sack contianing the ground kava repeatedly, and then we took turns drinking it. Then he said that by having kava together I'm officially no longer a stranger but a friend/family, which sounds like the kind of hogwash tour operators might feed en masse to dorky tourists but sitting on the floor of his porch kind of outside normal tour organization it felt not entirely implausible. Then we still had some time to kill so we went 4x4ing around some nearby hill country, and I enjoyed just seeing around the countryside. 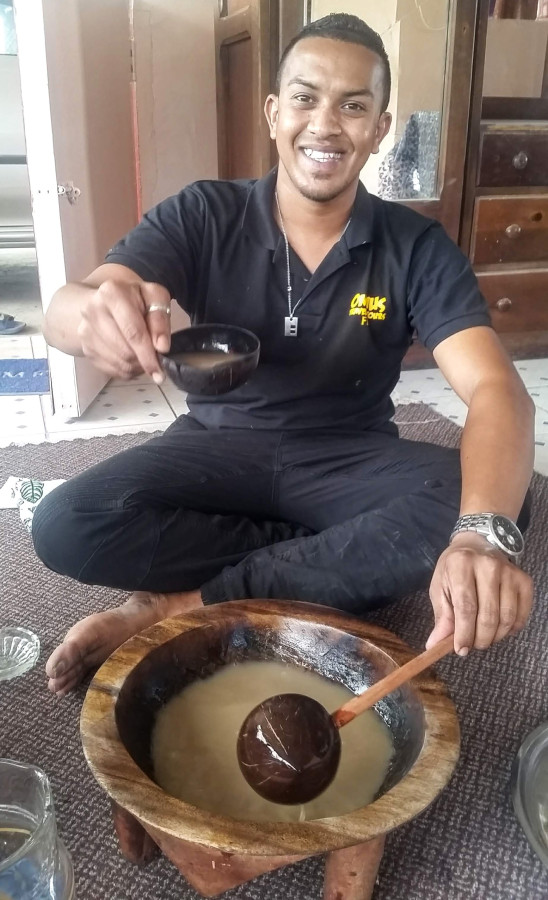 And then in mid afternoon it was time for me to get back to the airport. I tried to after-the-fact haggle that he should give me a discount since I was so flexible on our plans but he declined and charged me the standard excursion rate, so much for special deals for friends! If I had insisted on the plan I'd already "booked" he'd have been out the fees from all four crewmembers! Ah well. Got to the airport and on my next flight without incident. Arriving in Melbourne late in the evening it was like 40f, a definite shock from the nice weather I'd been experiencing for a month! My friend Ben picked me up and took me home. The next day the high once again never reached 50 ::grimace::. But these last few days (two-three weeks later now) its seemed to imrpove rapidly, with temperatures in the 60s and next Tuesday is supposed to even hit 70! When the weather is nice it really is very nice here! 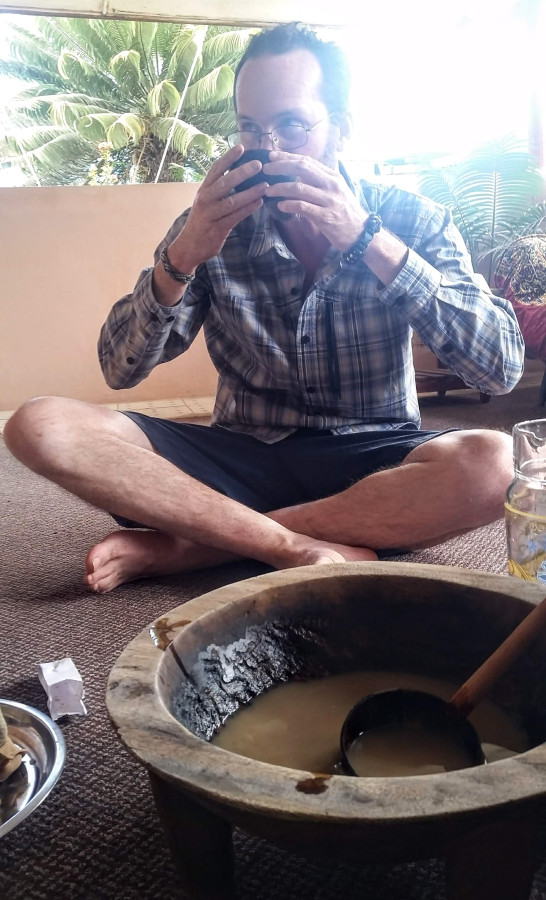