1869 - Spotted Owl passed between the two tall trees he had been told were considered the gates to the mountain. Gateless gates. The stark cliffs of the Six Grandfathers seemed forbidding and blue in the afternoon light. Spotted Owl stood and gazed at them for some time as the wind swished through the pine trees around him. It was truly an impressive sight. People from the closest village had told him they weren't sure there was a wise man living on top, but they didn't know for sure. Having journeyed several days from his home village, Spotted Owl gazed at the impressive mountain and thought to himself that it was a worthwhile trip even if he couldn't find the man.
He carefully picked his way across the scree at the base of the blue cliffs skirting around the edge of the massive craggy stone outcrop until he found The place he'd been told he could climb up to the top. It was an extremely steep and arduous climb, at times making Spotted Owl think wistfully about how much easier it would have been when he was young. At times he feared for his life as dislodged stones slipped from under foot and went skittered away down the precipice.

He found the top of the giant rock formation to be uneven and rugged. He explored for awhile but found no sign of anyone else. He searched around for awhile but soon the sun was setting in a beautiful golden sunset behind the black hills. He sat on a rock and watched it and then, as it was becoming dangerous to wander around the area in the gathering darkness he spread out his furs in a crevice and was able to gather enough firewood for a small fire.

He woke up early the next morning and explored the rest of the top of the rocky outcropping but there was definitely no one living there. He sat on a rock admiring the extensive view. He had been very interested to learn the wisdom of the wise man he had heard about and was disappointed to learn he either didn't exist or at least wasn't to be found here. But he gazed out over the landscape and tried to look on the bright side, he had gone on an interesting journey to this beautiful place.

That afternoon he heard some noises and was surprised to find another person climbing up to the top. He was disappointed to find that this wasn't any illusive hermit returning but a young man. Upon reaching the top the young man quickly saw Spotted Owl seated on his rock, looking off into the distance, and came to him.

The young man greeted him in the traditional Lakota manner and then explained that he had come to ask some questions.
Spotted Owl laughed and said "it is not me you seek."
Ah I should have expected he would speak in riddles the young man thought to himself. "It is answers I seek" he said
Spotted Owl sighed, "me too young man, me too." while he gazed into the distance.
"But you ... are wise?"
"I think.. it is wisest never to think of yourself as wise" said Spotted Owl.
The young man thought about this while looking out at the view himself.
They proceeded to spend the rest of the afternoon talking, the young man soon to be married to a girl he barely knew from another village, had many questions about society's expectations for him in life, and Spotted Owl answered as best he could from a lifetime of pondering these same questions.

The next morning the young man departed back down the precarious side of the mountain. After he left, Spotted Owl stood on a rock and enjoyed the fresh breeze. He was in no hurry to return home. His wife had long since died and his children were grown and didn't need him around. Indeed it was that feeling of being redundant in his own village that had lead him on this journey. He thought he'd maybe stay another day and enjoy the serenity here.

The next morning He rolled up his bed furs and ate some more dried venison, and then decided to sit on an inviting rock in the warm sun for awhile before leaving. He was watching an eagle wheel about in the sky when he heard steps coming towards him. He didn't take his eye from the wheeling eagle though because its majesty could disappear while the human approach was but inevitable.
"Hau kola" said the voice, which Spotted Owl noted did not belong to the young man he'd been speaking to earlier. "I have questions"
Spotted Owl smiled. "Having questions is good"

Somewhere out of earshot in the surrounding forests, a tree fell. 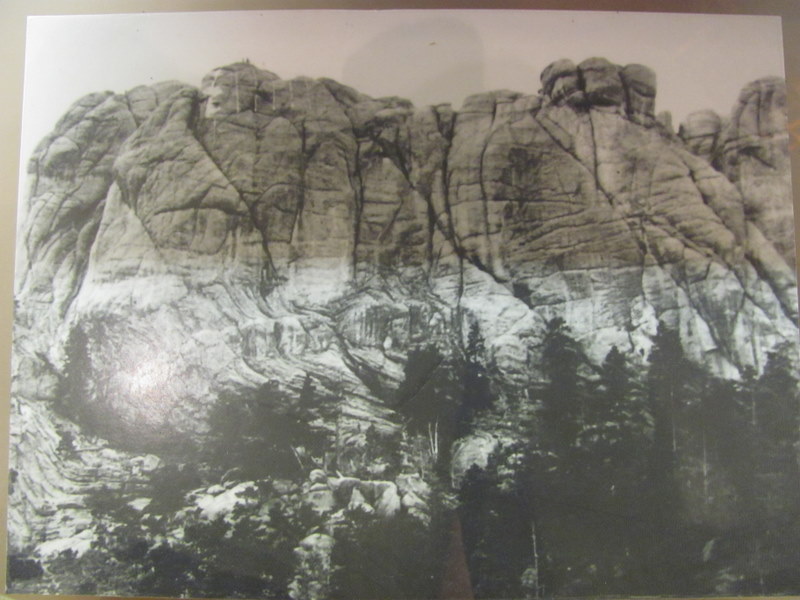 The area encompassing "the Six Grandfathers" ("Tunkasila Sakpe" in Lakota) was promised to the Lakota Sioux "in perpetuity" by the Treaty of Fort Laramie in 1868, only to be seized in 1876, and as you may have guessed the mountain was turned into Mount Rushmore in the 1930s. I don't believe there's any actual Lakota tradition of a wise man living atop it and I hope the Lakotas will forgive me for any ways I have failed to embody their spirit here. They did have a tradition for sort of wise men called Heyokas who, as wikipedia itself notes, would pose questions in the manner of zen koans. Being more familiar with zen koans I tried to work some classic zen koan references in (the gateless gate, blue cliffs, etc).
Tags: historical fiction, lj idol entry, native american historical fiction, zen
Subscribe