Meanwhile in the Dungeons and Dragons inspired creative writing odyssey...

Week 10
I won't reproduce in full here but I was quite pleased with a tastefully inserted sex scene. In my character's background it had been written that he had "insatiable desires" but that hadn't really come up yet in any log entries or storyline. It was known that my character never slept in the inn with them but hadn't been said where. So I inserted a scene where he wakes up beside a Swedish girl who had just accidentally pulled the blanket off him (the guys had been talking about Swedish girls at the previous session), then begins to feel his insatiable hungers, and then I tastefully change the scene to a steam hammer a gnome had just invented as it rhythmically hammered some metal (a steam hammer had featured on some program on the tv that was running silently in the background at last session) ... and then when we rejoin my protagonist he is just finishing a delicious Swedish dammsugare. Now isn't that tasteful?? I got a lot of push-back from the guys though alleging that "Swedish girl" isn't a valid D & D race, hrmph.

Week 11
What you need to know is we wandered into a cave and came across four giant spiders. We had in our company a "giant goat" named Tandoori which we sent ahead of us to trigger the spiders because we're jerks like that. I think this giant goat was unrealistically well behaved, in reality I find they never want to do what you want.
Also the previous week our friend Greg had tried to enter a single haiku as his log entry, which made many of us groan, and particularly incensed Ben, who went off on a tirade about how he hated haikus. Now if anything is a worthy goal its annoying Ben, so this week, I present you, our encounter with the spiders, as told from the spiders point of view, who, it turns out, only think in haiku form!!

Hark! A noise! They come
Many varieties of snack
Bumbling to our webs

Fire! Brightness! It burns!
Quite rude behavior of food!
Don't like so spicy

Tin can snack throws spike
Hits Marlobe, she jumps on him
They fight, she bites him

One goes before the rest
Must be their leader, bravest,
Has four legs, and horns,

Attertas leaps down,
Upon their gallant leader,
He falls they despair.

The one that makes fire,
Runs now wildly at Marlobe
And detaches her head.

Food has killed Marlobe!
This is unfortunate for her
But I will eat her

Tin man runs to them,
Hits Attertas with his tool
Flash of magic, dead!

Orcobe killed now,
By magic fire shot at her,
Sizzles and curls dead,

Only myself left now,
I will eat them all myself
All mine to eat now,

It burns it burns me,
Magic unfair, quite rude really
Dying I'm dying. 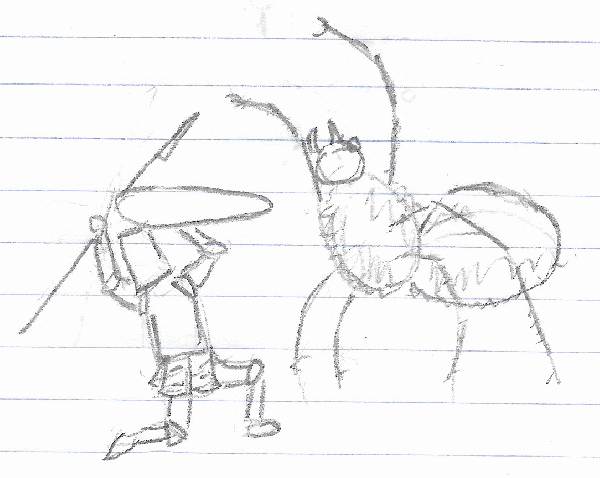