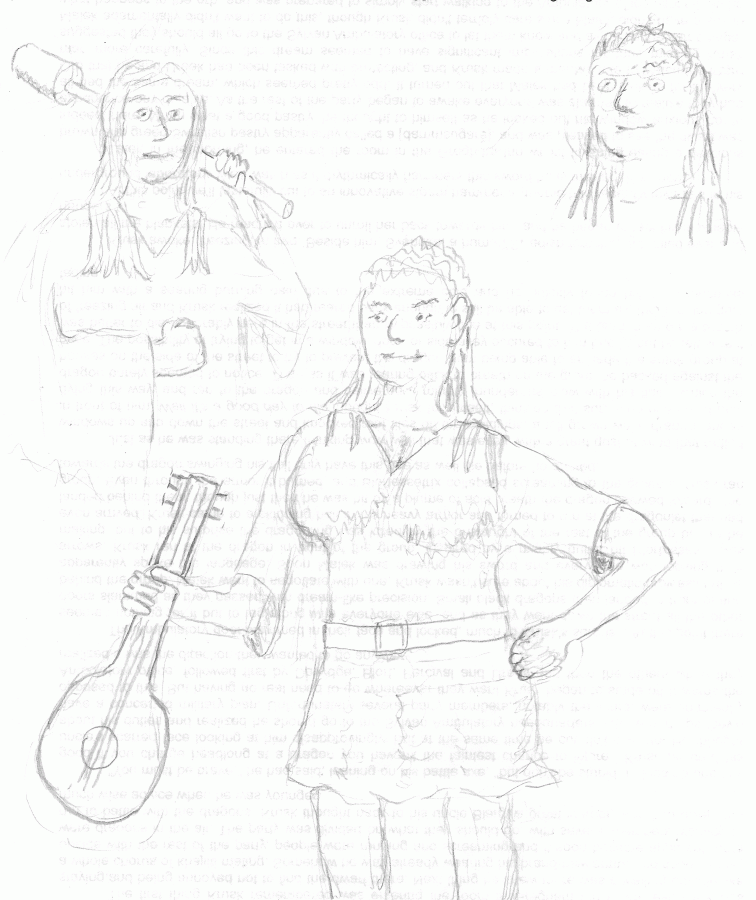 More doodles from the D7D nights. I was afraid for a long time to even attempt to tackle drawing women because it seemed too easy to accidentally make them terribly ugly but I finally dove in. Top left is Mick's Girlfriend's character, a mace wielding cleric. I feel like it doesn't look terribly unlike her herself. I know a mace is traditionally less marshmellow-shaped but drawing everything the bog standard normal way is dull so I'm going with marshmellow-of-war. The girl holding the lute is Greg's character, a gnomish bard that was formerly an orc. No human model but it was kind of an update of this earlier attempt at her when she was more clearly an orc (but I had gotten the fang/tusks going the wrong direction due to lack of an orc model). Was told I made her "too attractive and her boobs aren't big enough." Lol. I think the top right was my subsequence attempt to draw a decidedly unattractive female face but I didn't like it. 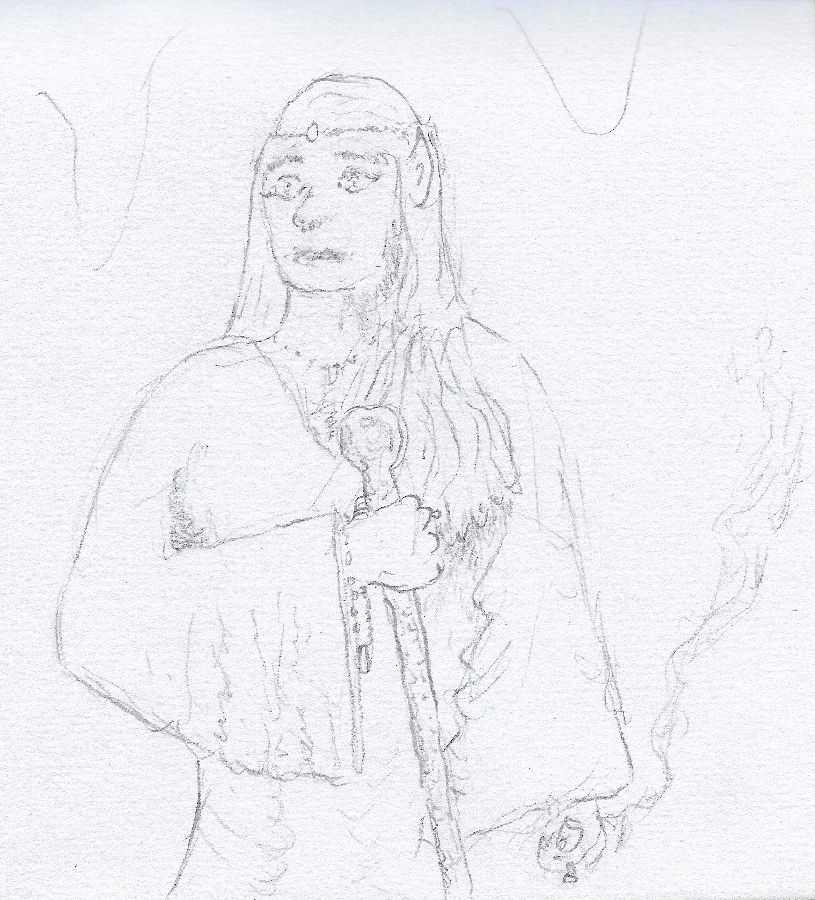 This was player Gemma's elven druid, I also tried to use her herself as the initial model but it really came out looking nothing like her except for the fact she has a septum ring and this character has a barely visible one. I'm also going to go ahead and blame my problems a bit on the paper -- I had picked up a "watercolor" sketch pad thinking it would work fine but I tihnk the paper is too textured and it kind of messes up the finer details (lips and eyes) on such a small drawing. No she's not smoking a cigarette its just her favorite thing to shoot fireballs at stuff.


And then I saw someone post about a "life drawing session" right here in my little town of Birregurra on Tuesday. Sounded good! I signed up! I didn't quite realize there would be a nude model, which made me feel a bit bashful at first, but it turned out alright. I thought it would be like a class but it was really just the Birregurra Art Group organized a drawing session with a model and that was that ($25 a person to cover costs). The following are a selection of the resultant pictures I drew: 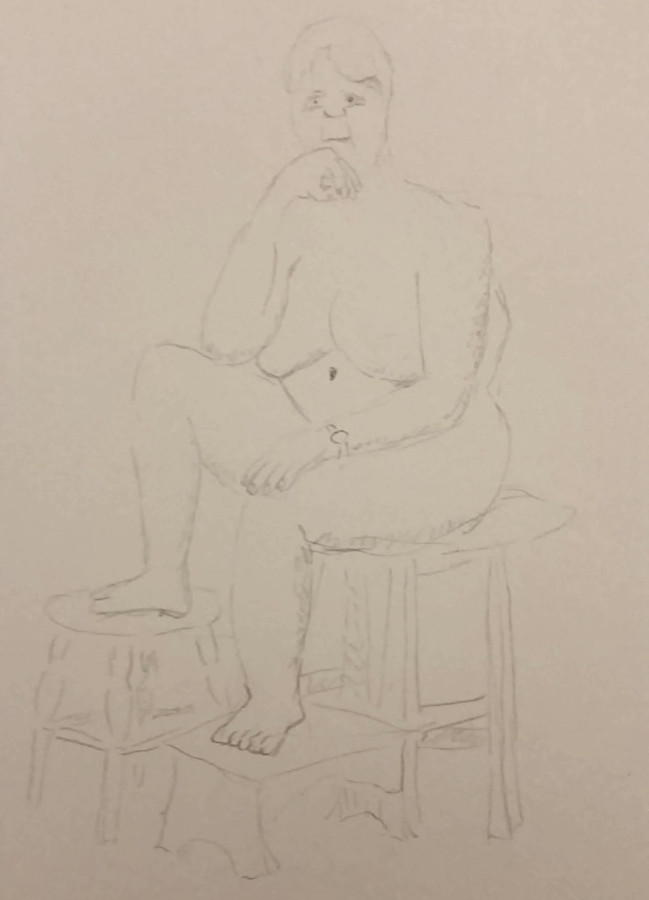 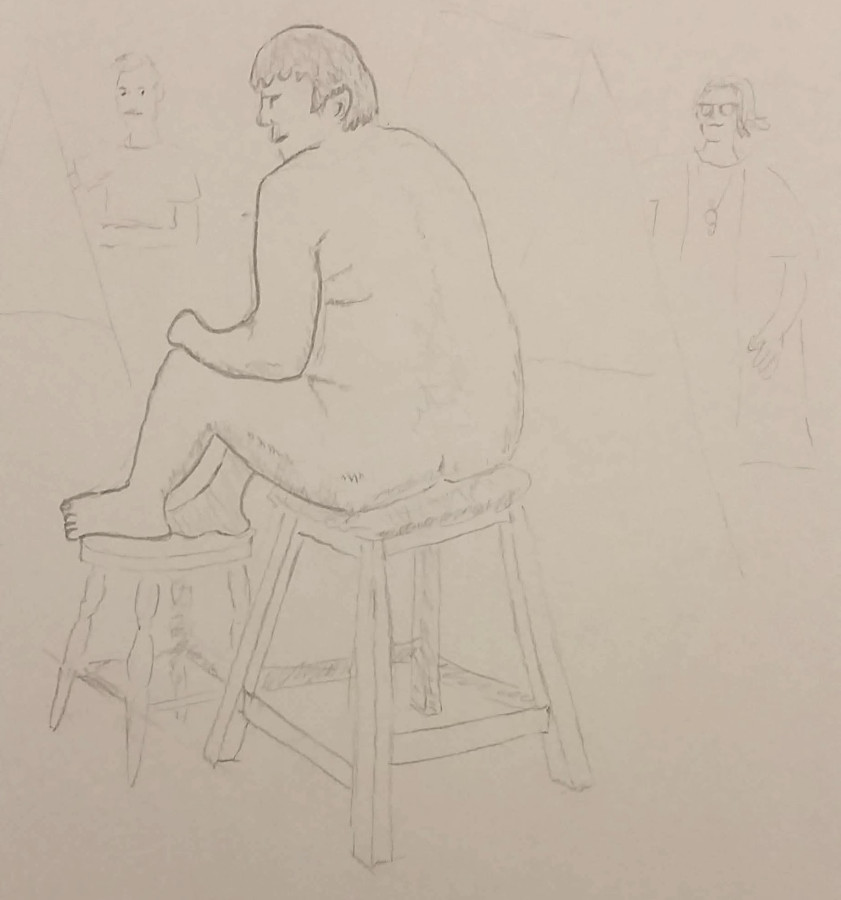 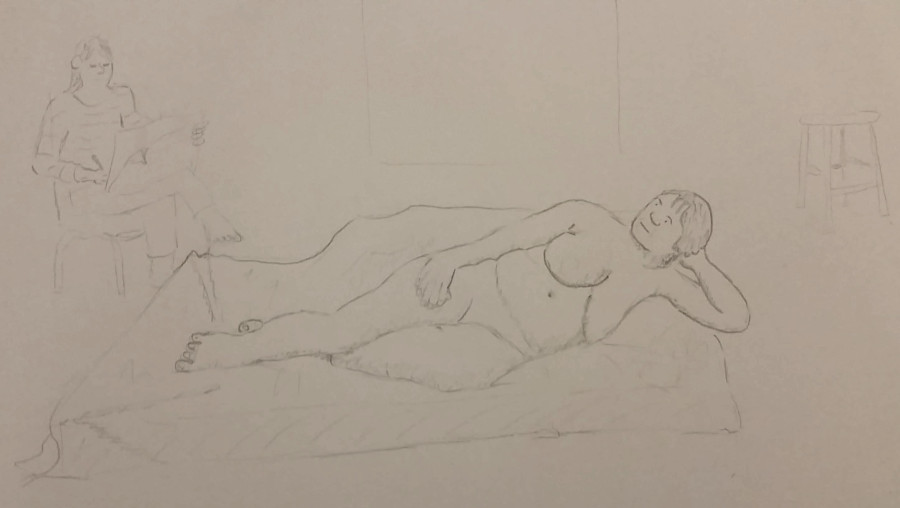 I wasn't quite sure if it was kosher, I don't know what the rules of etiquette for this kind of thing are, but I really enjoyed drawing the people drawing the model who were on the far side from me into my picture. Most other people seemed to get the outlines in and then spend most of their time aggressively shading in the model while ignoring the face entirely. I find my style is I'm more inclined to more like a line drawing with the minimum shading necessary to convey shape, and was particularly interested in face.

Anyway, and THEN there was a portrait drawing class yesterday (Saturday) at a studio about an hour from here (Ocean Grove, cost of $135 which sounds shocking if you're in America but in Australia you couldn't book a one legged hobo for less). This one was an actual class and the young woman leading it had some useful advice I think I definitely benefitted from. She provided black and white photos for us to draw, I used one for the initial practice round: 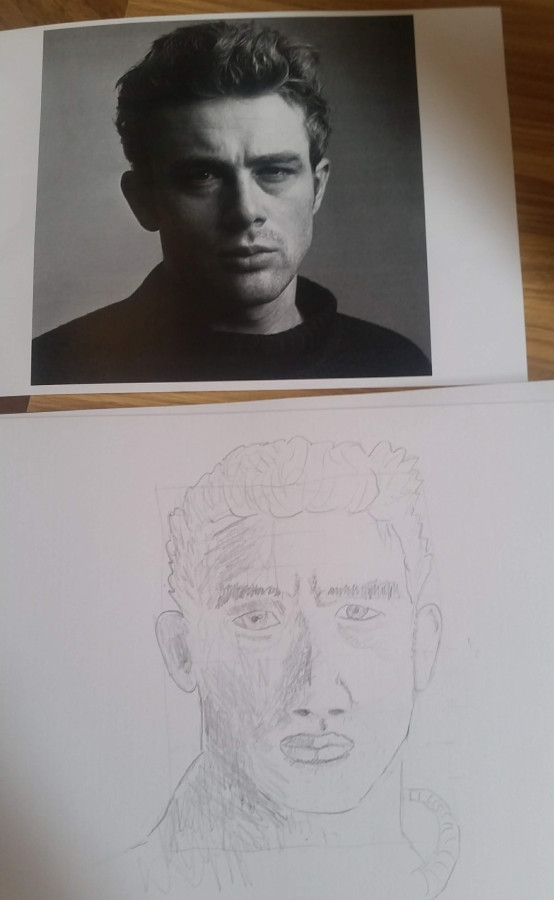 She had said we could bring our own photo references but they should be black and white. I really wanted to try drawing the following portrait even though its color and not really high-shadow contrast. And so I did! 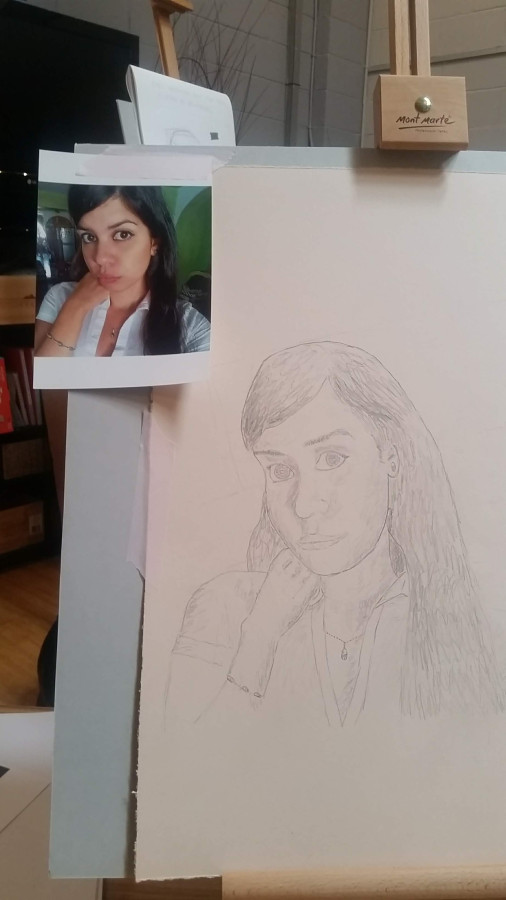 Aaand I think it's not that great but hey. Then when I got home I tried drawing it again in the small sketchbook to see if I could do it better (below left) but I don't think I did. And then I wanted to seriously test the theory that I draw better while drunk and drew the second one below while drinking at my friend Greg's place later last night. In this case I think it's clearly not better. Doesn't look like her, though I think it does at least look like a latina? And third is the original of course, for reference. 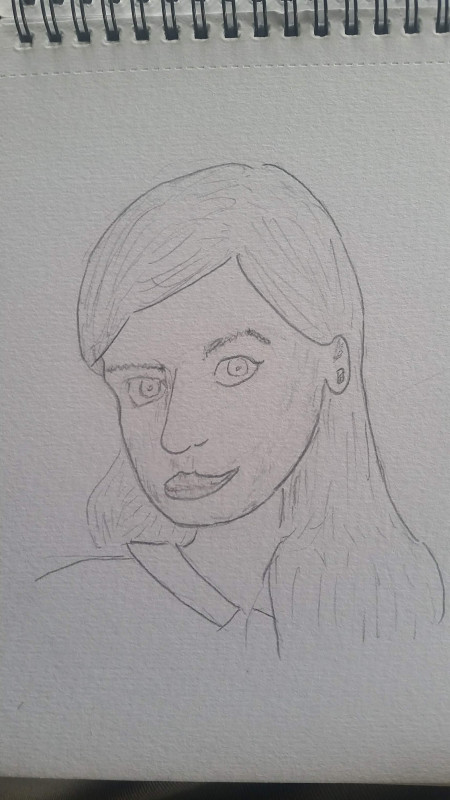 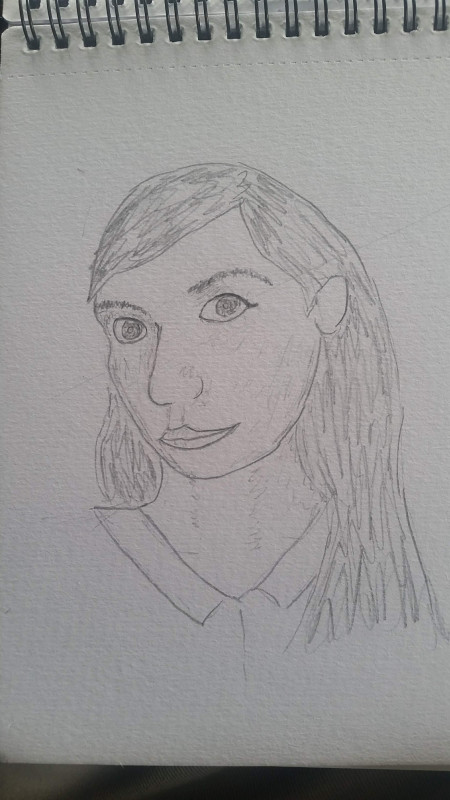 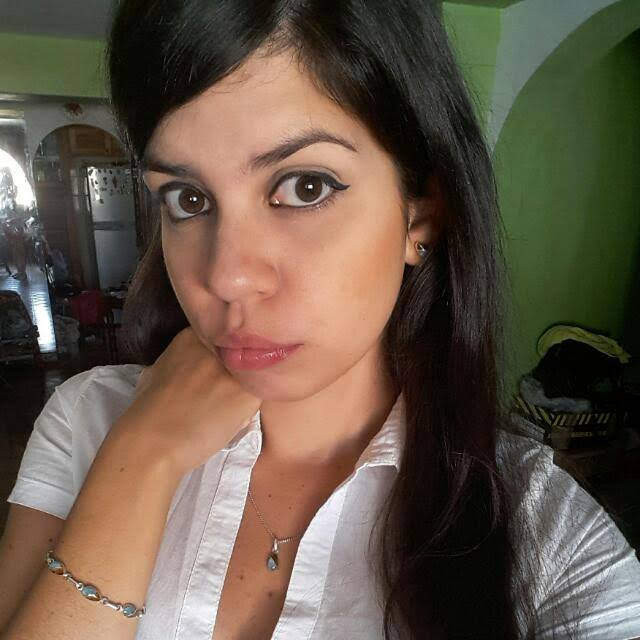 The first time I tried to draw it I felt like I was making the eyes implausibly big, but they're actually bigger in the photo!

I think I'll probably keep attempting this one until I get it right but probably I need a lot more general practice maybe with easier pictures or other pictures of her before I can get it right. But in the mean time I really feel the lute-holding character at the top of this entry is rather the epitome of the style I want to go for, I don't feel compelled towards aggressively shading toward photorealism, I'd rather achieve a likeness and sense of personality with a few pencil lines. I also liked my earlier portraits of my friends Mick and Ben better than these portraits-from-photos. Even though as models they kept moving, that allowed me to not sit there tracing lines but to work with a 3d conception of their facial structure. But more practice in classical portraiture certainly can't hurt!


***UPDATE: My friend Grace asked me to draw a picture of her and provided a reference picture so I obliged,: 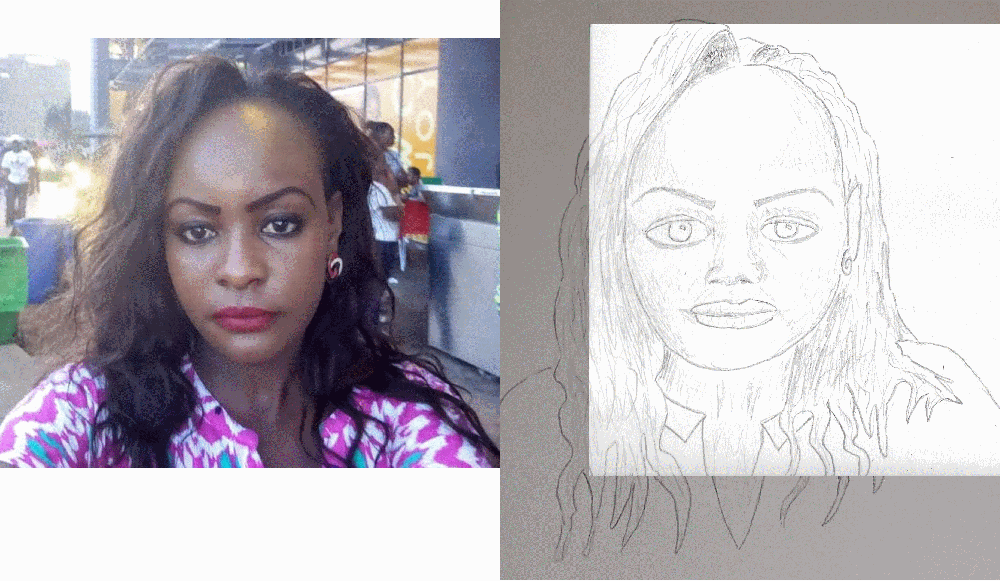 The whole picture didn't actually fit in my scanner since I did it big in my A4 sketch pad so what I've done here is badly superimpose it over a photograph version to give the general idea of whats cut off. Not gonna spend a lot of time fighting it, anyway, you get the idea.