It's time for the yearly year-in-review!! I had to look back on my past entries and photos to remember way back to summer (January-March that is!) 2018, it seems so long ago!

Summer 2018 - In addition to at least one camping trip with my friend Billie, I had discovered the Field Naturalist Club of Victoria and went on a few overnight adventures that involved fauna surveys and things! That was a lot of fun. It was my first season as a trained up member of the local fire brigade and I turned out to several grassfires and spent one 12 hours shift on a really big wildfire near here, that was really quite an experience! In February my parents visited and we went to see where the penguins come out of the sea on the other side of the bay here and then traveled around the west coast of Tasmania.

As Summer faded into Autumn it became alarmingly clear that there would be no development projects this year. I blame Trump, though ostensibly its just that all the USAID projects ended their five year mandate this year and had used their budgets up already. Seems weird I don't know. As the nights became longer and the days became colder I contemplated what I would do instead. I was kind of inclined to go to Nairobi since I hadn't been there since 2015, which I'm sure you'll agree is far too long not to be in Nairobi. My dear friend Claire was getting married and I quite wanted to attend (incidentally, I had met her on tinder originally, just goes to show despite what they say you CAN make friends there and later be invited to their weddings). I also had my uncle's wedding in California on that exact same date though. I felt like having been to California twice in 2017 I shouldn't return but somehow felt myself being called back to the Americas. Had an enjoyable roadtrip up to the wedding and back and the wedding itself, seeing all the family. I do quite love seeing all the relatives at weddings. Also had a generally very enjoyable "summer" in the middle of "winter," spending about a month in California helping my friend sell honey at the fairgrounds.

Aaaand of course the single most momentous thing to happen to me this year. I had actually bought my flights to the Dominican Republic to meet Cristina before I even arrived in California, thought I pretended to my parents (whom I was staying with) that I was still playing with the idea of going there (though I hasten to point out that I did this without actually uttering any untruths, since I do not believe in even "white lies"). At the time they seemed to think it would be a frivolous use of money, and I hoped they'd come around to approving the idea before I went but they didn't quite come around (dad is very Mr Financial Responsibility) but finally it was time to seemingly suddenly fly off to the DR, which caught most of my friends quite by surprise. I'm pretty sure my parents have since come around to seeing the value in it though ;)
And that trip of course went extremely well <3 <3 <3 <3 As I said to my friend Joe once when he asked how things were going with Cristina, "well, I must warn you, I can't really say anything about that without it becoming extremely extremely mushy." She has been a very fundamental part of my year and she and I are greatly looking forward to the future. 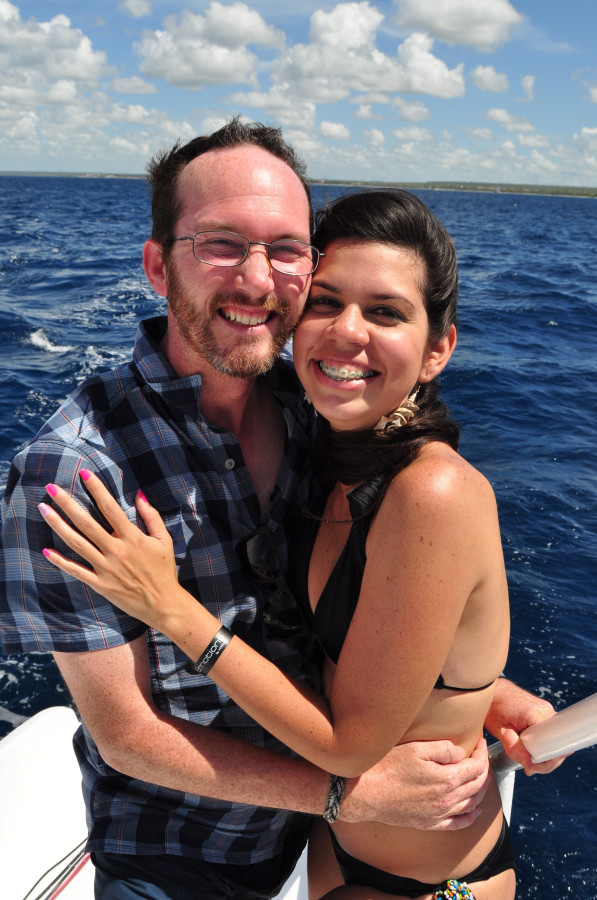 Spring 2018 - Spring? What Spring? I felt like its still been pretty cold up until recently and the bees haven't produced nearly as much honey as I'd have liked. We finally formed a beekeeping group in Birregurra town here and its been really fun getting to know some more people around town and getting more involved in things around here.
Also my friend Doug visited for some three weeks. I had originally met him in Nigeria, then we traveled around East Africa together in 2014, and I visited him at his place in Washington state last year. So it was fun seeing him again over here this time.
Also I got a lot more involved in local art stuff. I submitted a photograph to a local art show, got a story published in the local Geelong anthology, and started drawing again a lot more seriously than before, so that's all been fun!

My car has seemed on the verge of complete breakdown since early this spring which has resulted in less driving far-and-wide and as we go into summer will probably result in less adventures than last year. ):


Meanwhile in the news: For reference looking back from some future date, I should note that this year wouldn't be this year if it hadn't been President Trump's second year in office, with the constant fiascos that has entailed. It would take an entry longer than this one to recount all the shenanigans but as of the present moment he's losing the last two sane heads on his cabinet who could have kept him in relative check, General Kelly and General Mattis, the government is presently shut down while he basically holds the country hostage for his wall, and he contrived to commit such a huge diplomatic faux pas on his recent visit to Iraq that they are demanding we remove the several thousand troops most of us are surprised to learn we had there.


Plans for 2019!
Cristina just graduated medical school and will take a job either at the military hospital or (we're really crossing our fingers for this) the remote Roques Archipelago. If the latter I hope to spend as long a time as I can contrive visiting her there in my winter. If the military hospital, well, I suppose I'll still visit her in Caracas but it doesn't sound quite nearly as nice since crime is rampant in Caracas, I'd be a target as an American, and the Venezuelan government iteslf is extremely unfriendly to Americans. It would have been nice if I could take another project in the Caribbean / Central American area and she could join me but she's unlikely to have any vacation days herself by time time of my winter. I might take a project in the area though just because it would be conveniently near for me to see her before or after.

A lot hinges on an unclarified visa issue. The first lawyer I talked to seemed to be of the opinion that I couldn't take more vacation leave than the three weeks I'm allotted or else I seriously endanger my visa, though he was looking into clarifying this. The second lawyer seemed very confident that any time in excess of paid vacation merely delayed my ability to apply for permanent residency by the amount of time I am gone, which is not bad at all. If the former case turns out to be true I may not take any development project at all this year and use all my vacation time to spend with Cristina. If the latter case is true I'll probably take at least one development project and in addition spend several weeks with Cristina.

Additionally we're going to see if we can get her added to my current visa here which according to the most optimistic theories COULD be as early as this year but I hardly dare hope we could be so lucky.

Additionally it looks like I'll be involved with a project in Papua New Guinea which I can conveniently conduct by zipping up there on long weekends and use a minimum of days off.

And everyone seems to be sharing these things