There's a game I absolutely love, that every time I play it I end up laughing so hard it absolutely hurts. This game is called Telephone Pictionary, and since most people aren't familiar with it and it takes just a bit of explaining but then can be played any time you have pens/pencils & paper and a few friends about, I've been meaning to write a post explaining how to play. I will herein explain how to play, and then I've organized a demonstration round to, you know, demonstrate. For the demonstration round I'm doing it a bit unusually, having friends all over the world participate, so it will, you know, require some long distance dedication.

(1) We have found it helps to make booklets out of the paper to keep everyone organized. People will need at least as many pages as there are people in the game. We've found a folding paper in the following manner to make a little booklet works well, though there's sometimes problems with being able to see previous drawings through the paper which is problematic: 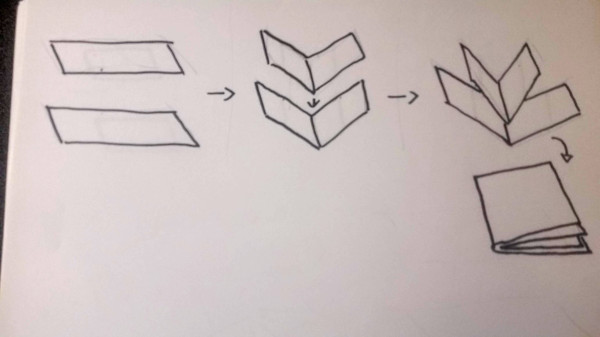 (1b) It also helps to number the pages

(2) Okay everyone has a booklet and a pencil and is ready. First round, write what you want drawn. Something like "Dragon trying to unplug a toilet" or "Aliens ordering at the drivethrough" or "an elephant dancing with a rhinoceros but really it wants to be eating pizza." generally animals doing anthropomorphic things are a good go-to. You can also throw in your friends though for an added challenge, for example this one of "A possum tricks Ben [who is very lactose intolerant] into drinking milk" is one of the ones that had us absolutely dying with laughter.

(3) Pass your booklet to the left, or the right. I have found once a round is completely finished its nice to do the next round in the opposite direction so people aren't always receiving the same person's crappy drawings.

(4) You should now have received a booklet with the instructions for a drawing on the first page. Turn the page and draw it. When everyone is done the booklets get passed again in the same direction, ie to a new person. As passed it should have the drawing on the open page so the person receiving doesn't see the original drawing instructions.

(5) You should now have received a drawing. Frequently at this point you will hear people exclaiming "what the hell is this??" as they behold the baffling drawing they have just received. This is all good and well as long as you don't blurt out anything that would give away what it might be, nor can you ask the person you received it from. You turn the page and write what you think the instructions probably were. Pass the booklet.

(7) Etc etc until everyone gets the booklet back that started with them. Usually enough people will recognize that their own has returned to call it. Then we usually go around sharing the transformation within our booklet.

Demonstration Round!
Okay so this was going to present some unique challenges. Instead of having as many pictures going as people involved I decided just to send two through, starting one as the description as usual and one as a picture, so everyone receiving them would draw one picture and write one description. In keeping with the "Long Distance Dedication" theme the two descriptions I came up with were (A) "a dog, on the phone, holding a ball, about to board an airplane" and (B) "An astronaut christens a spaceship by tossing a bottle of champagne at it from a great distance"
The participants would be my mom,

furzicle, in California, my friend Koriander in Washington State, my friend Mick here in Australia, my friend Sharon in Namibia, my friend Greg and his girlfriend here again, and as a grande finale legendary former LJ-Idolist

Subject A
(1) My description: "a dog, on the phone, holding a ball, about to board an airplane" She didn't like her first dog but was drawing in pen and couldn't erase so she replaced the dog using another piece of paper, lol!

(3) Kori's description: "Cell-phone toting, baseball playing dog about to travel on an airplane"

(5) Sharon's description: "A baseball wielding doggo checks in at the airport" (note we lost the baseball in the last picture but because Sharon didn't specify that she only saw a bat we might get it back?? (7) Kristen's description: "Rowlf the dog threatens twin girls at twin podiums with a baton, while presenting his ticket for the WWII airshow in progress. One of the girls has a briefcase 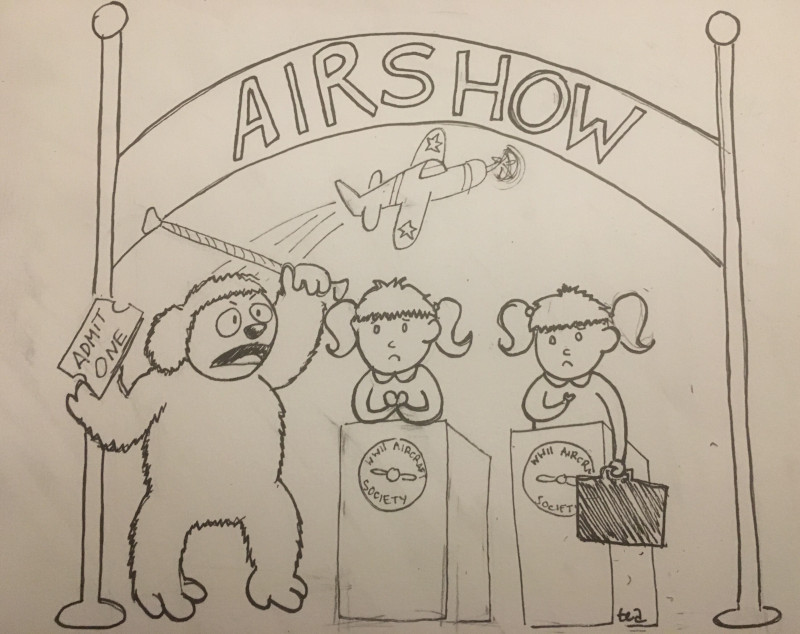 (1) My picture of it (again normally you don't start by drawing something you described): 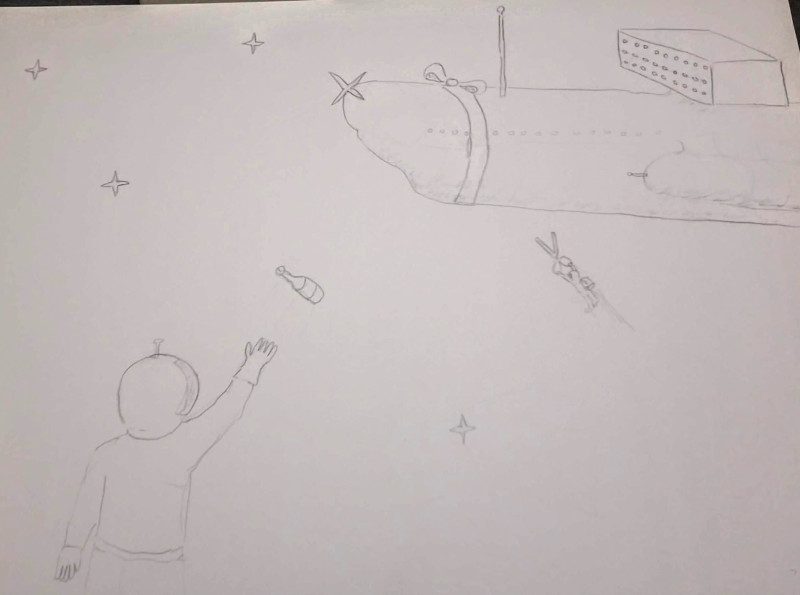 I tried to limit myself to twemty minutes and not put more detail in than I would during a normal game. I was trying to make a spaceship that was kind of reminiscent of an ocean-going ship but I think I totally overdid that aspect. Didn't help that I ran out of room for engines on the back

(2) Mom's description: Well, I should have anticipated that many of the people I chose to do this demonstration round with weren't actually already familiar with the game. First she literally wrote a story, which I believe is in fact her livejournal entry for this week (well the first draft thereof, I think she worked on it a bit more after that, but it was already of about the final length!). Then I explained more about what was expected in the game and she gave me: "Draw a behemoth submarine docking on Mars (the moon). It has a huge control bay, a periscope, and a big gift-wrap ribbon tied around its nose. A scuba diver is swimming up to greet it and remove the ribbon An astronaut is about to catch a bottle with a message inside. Alternatively, someone on the sub is casting out a bottle with the message, “Save me! I’m being held captive!”"
Which.. I can see where the message in the bottle came from but the message itself wasn't in the original, but the addition of details is definitely something that naturally happens in the game. Often people add details just for clarity (usually in their picture phase) and the next person thinks those were important elements of the description and after going through a dozen people a picture will have a lot more going on in it than it started with, so we were off to a quick start! 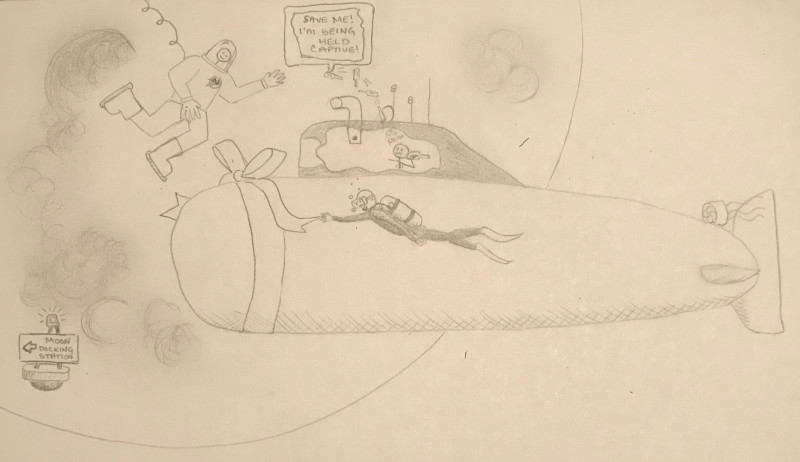 (4) Mick's description: "A gift-wrapped submarine with hostage on board that's about to dock at a docking station on the moon being greeted by a NASA astronaut and a scuba diver swimming beside it." 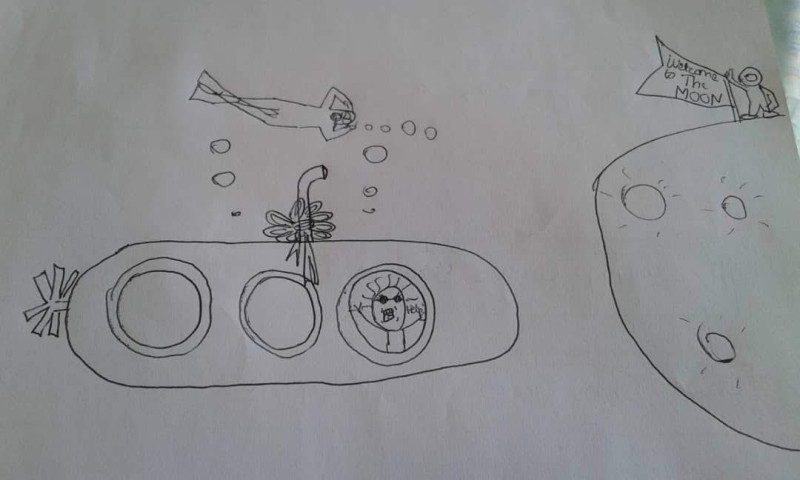 (6) Greg's description: "Diving in a submarine. A christmas bow is wrapped around the periscope. Someone is trapped inside and wants to get out. They are headed towards the moon." 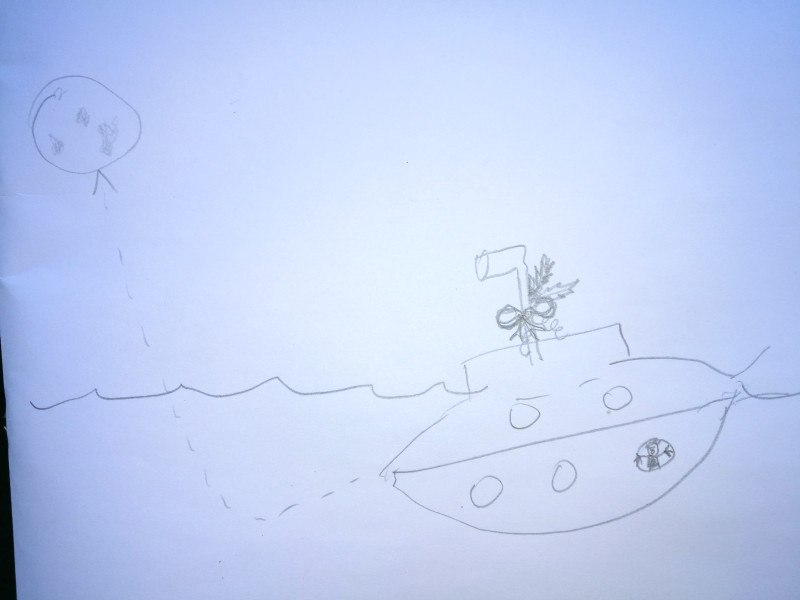 (8) Tea's description: "A screaming man in a Christmas submarine headed for the MOON!

I just leafed through some funny previous rounds I've saved and had a good laugh but sadly its tedious to share them here as I'd have to photo or scan every single page and my camera hates to focus on drawings, making it especially tedious. But here's a round from last week where "A reindeer is in the bottom of a hole he is digging, an eagle is directly overhead" somehow becomes "a beaver cleaning a pool" (I have noo idea how that one drawing is supposed to be a reindeer at the bottom of the ocean, but your friends being fantastically terrible artists is all part of the game!)

And as a final note (other than presumed updates to the ongoing game above!!), here is "a dragon wrestling a pizza, with a referee in the middle," the dragon may look familiar to some of you ;) 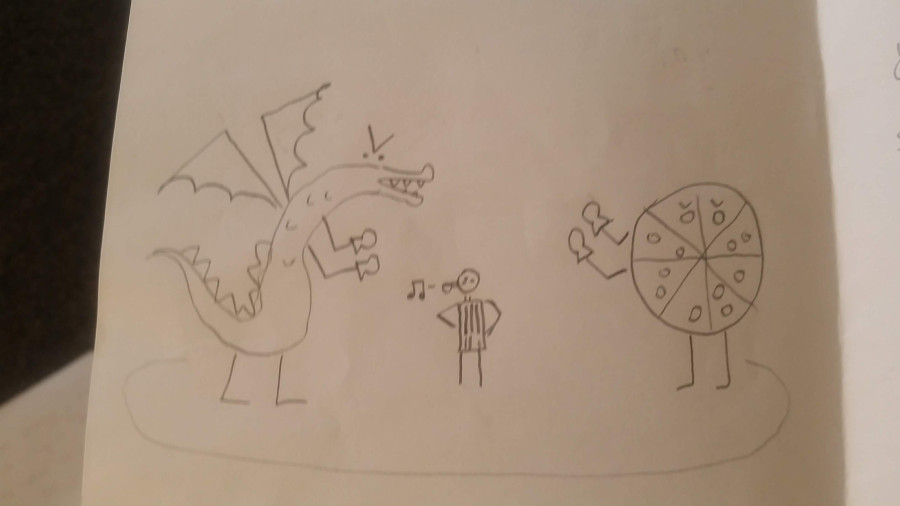