Its time for more beer reviews. As much for my future reference as anyone elses.

So I've been going to the BevMo beer tastings most Tuesdays and Fridays. There's a group of other people that also do this, and we all recognize eachother. I missed last Tuesday since I was with Marla, but the week before that when I showed up several people there saw me and were like "hey Kris!! oohhh you're not gonna like the beer today!" And I was amused that not only did they recognize me and know my name, but the other beer tasting frequenters knew my tastes as well! (It was a lot of Belgian and white beers that day). Yesterday I walked in and they all commented about how I no longer had a beard, and asked me where I'd been on Tuesday.

Anyway, notes from yesterday:
Brother David Ale: (Belgian) tastes like candied bananas! I didn't like it but someone else there bought a bottle of it after tasting.
ESB: (Pale Ale) Apparently ESB stands for "extra special beer" (!!). Anyway, we decided it was "extremely forgettable." Which isn't to say its undrinkable -- quite the contrary, I think if someone put a bunch in front of me I'd probably keep forgetting I'd just had a glass (which isn't to say it tastes good either!). It was amazingly unmemorable.
Boont Pale Ale: AKA Anderson Valley Boont Pale Ale or something. Its the beers with a moose with antlers on the bottles. I don't know why they write both "Boont" and "Anderson Valley Brewing Company" on the bottles, as if they can't decide which one is the name of their brewery. Anyway, I'm not a huge fan of pale ales but I really liked this one. It tasted really nice and crisp.
Long Hammer: (Pale Ale), falls somewhere between the above. I'd say its a relatively mediocre pale ale. Not a very intense flavour. Not bad either though. I suppose one might like it if one wants sometihng in a pale ale direction but not as intense as most pale ales are.
Ayinger Celebrator Dopplebock: This one wasn't actually part of the BevMo tasting. Rather I had it last time I went to Yardhouse and really liked it. When I was at YH again this week I couldn't remember what the beer I'd had last time and really liked was, but I texted Marla and she miraculously remembered (!!), so then I bought a bottle at BevMo yesterday. And it was indeed delicious. I really like dopplebocks. They're actually technically lagers but with darkly roasted malt and more thickness to them they taste more like less stout stouts.

After we'd all tried each of the beers yesterday, we played a game where the host puts a beer in our glass while we're looking away and then we try to guess which one it was. I got 2 of 3 on the first try (but mistook ESB for Long Hammer O= ) 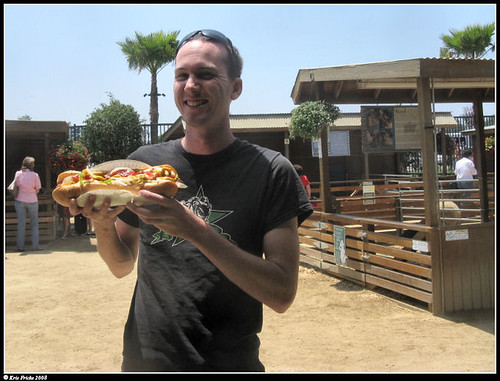 This thing was monstrous!
Note also: I love a good hot dog. I'd rather eat a delicious grilled hot dog than a chocolate cake I think.
Tags: beer, beer reviews, bevmo
Subscribe