Someone in the Americans in Melbourne FB group asked if anyone wanted to go camping this weekend. I put my hand up, so did a few others, we formed a group. We began to plan. After a few days I realized it was me and three young women, so I made sure Cristina was okay with that. She dutifully sent me a few fire emojis to indicate she was a fiery latina and gave the go ahead. Our camping plan was to head to the Grampians mountains about three (?) hours west of Melbourne, so the girls would take the train west to the town of Ballarat, which I'd drive to (it's 54 km north of me). I'd pick them up. We'd go to the mountains. Recall (or did I mention?) I have a new (to me) car as of about five weeks ago, a champagne colored honda civic I've named the USS Trilobite.

This morning I left home just after 10am. It was a beautiful morning. I began listening to Dr Jekyll & Mr Hyde on audible. Arrived at the train station in Ballarat just about a minute before the girl's train. I arrived at the platform just as they were making their way to the exit and they recognized me. Immediately they commented on my Australian accent. We hadn't known much of anything about eachother, which was a part of the trip I was rather excited about, I like trips with unknown people, it's a grab bag of experience. I had been dreading of course that they'd be overly prissy and difficult but they seemed quite nice. All were professionals in their mid twenties. One appeared to have a Filipino ethnic background but the other two were ambiguously American. One was from California the other two were from not-California (which is how Californians such as myself classify Americans ;) ).

We decided to get lunch before leaving Ballarat since it was lunch time and there'd be fewer choices anywhere further from civilization. We drove up and down a few blockfaces looking for a specific nice looking beer-pub I'd visited once before. The streets in Ballarat are wide and lined with grand edifices reminiscent of the 19th century. After failing to find the place I was looking for I decided to park in one of the many parking spots at a 45 degree angle to the street. CRASH!! The car was slammed violently and suddenly there was a red car just beside us and the woman in the driver's seat already yelling imprecations at me. It took me a moment to even understand what had just happened. My passengers all seemed fine. I got out and surveyed the scene: a red car had somehow come between me and the curb I was about to park against. There was no conceivable reason for a car to be there. During a break in the woman's exclamations about how I needed to look where I was going I calmly told her that I was turning into a parking spot adjoining the lane I was driving in and there's no reason she should have been there. She started telling me it was a two lane road and she had been on the inside lane. I looked at the road, it was wide but I would never consider treating it as two traffic lanes, and even if there had beeen, I would have been driving in the "left hand" one adjacent to the parking spot. Anyway, I only explained myself once, as she kept on arguing (for some reason she thought it was important to mention there were no skid marks repeatedly) I said well we'll get the police to come here and sort it out there's no need to get our blood pressure up. Her male vehicle occupant seemed to agree and got her to stop loudly trying to argue with me. 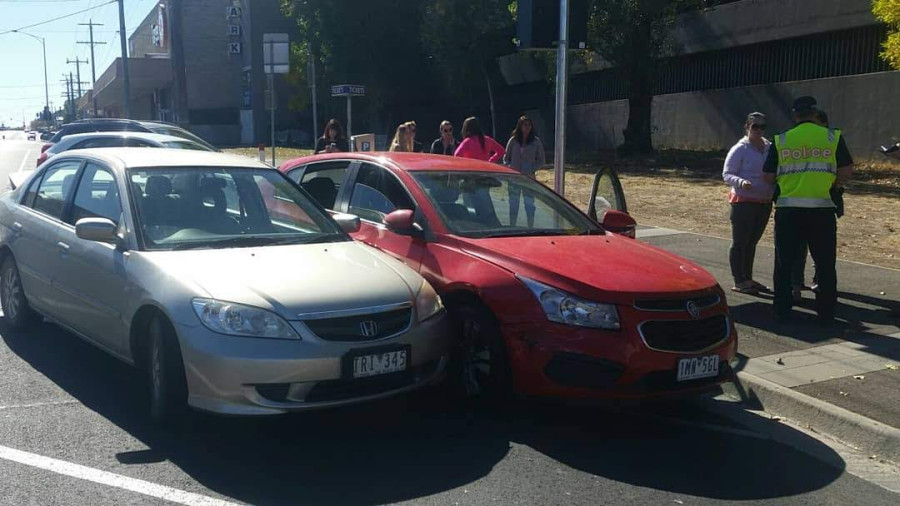 The cars haven't been moved. Note its in the parking area. Essentially she was trying to drive through parking spaces as if they were a traffic lane and thereby t-boned a parking car.

Because we were in the city center the police arrived within minutes. One asked me for my statement and I said "honestly I didn't see where she came from because I was just turning directly from the lane here into the parking spot here." He nodded, made some affirmative noises, walked around the vehicles, and joined the other officer where the woman was giving her explanation to him full of wild hand gestures. I was soon gratified to hear the officers, having to raise there voices to communicate with her, saying things like "no that's not how it works!"

Apparently they didn't have IDs or wallets on them. "we aren't required to have them on us!" the woman rebelliously told the officers. I felt like the way all three vehicle occupants insisted none of them had their wallets on them seemed implausible and badly acted. The officers then asked for a name to run through the system. The first name she gave them didn't work, which irritated the officers somewhat, I believe I heard "we could just arrest you" but she made some corrections and gave them a name that worked and they seemed satisfied.

Talking to the officers again myself, they mentioned that the other party was definitely at fault and they were writing them an "unlawful driving maneuver" citation or something, and that the insurance company would be able to get that to prove fault. Then they told us to exchange information and departed.

I'm not sure I have a lot of faith in the accuracy of the contact information the people gave me, or that they gave a correct name to the police, though I have the car's plate number. But the larger problem is that they loudly mentioned a number of times that they don't have insurance. I don't have insurance either, it's not required here. So I think getting money out of them would require actually suing them, and they seem like they'll be every bit as slippery and obstinate as they possibly can. Once we pulled the cars apart it was apparent there's a huge dent in my passenger side as if it was hit with a wrecking ball. Did I mention I've only had this car five weeks? 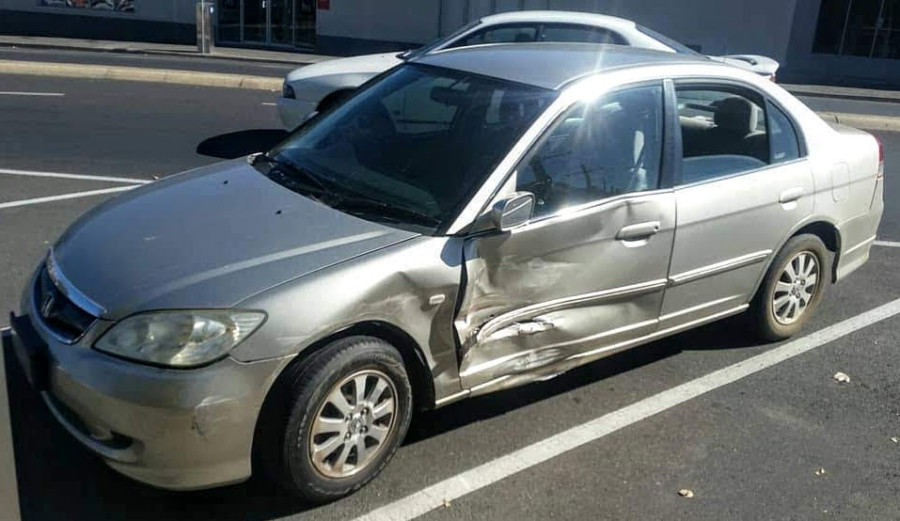 After this we parked the car in the spot I'd been trying to get into and went for lunch. I wanted to sit down and sort all this out in my head. We found the beer pub but it was closed for Good Friday so we instead proceeded to the Ethiopian restaurant I know of in Ballarat. That was really nice actually, because the owner is so warm and friendly and I've talked to him many times so he recognizes me immediately. To be in a familiar place with a warm sympathetic proprietor was really nice. Ethiopian soul food.

Talked to my parents and my authority on all things related to vehicles in Australia, my friend Billie. We still didn't know if my car would be able to drive. If it could I'd hobble home with it, if it didn't, probably I'd see if it wasn't exhorbitantly expensive to tow it home (54km recall). Either way the girls would be taking the train back to Melbourne. They were still enthusiastic about camping on this four day weekend though and we discussed getting a rental car and trying again tomorrow.

Got back in the car and..... it seemed to drive fine! Took the girls to the train station. Recall, the took the train (appx 1 hour 45 min from Melbourne), five-ten minutes later we were crashed into, had lunch, and now they were headed back whence they came.

Dr Jeckyll and Mr Hyde was just the right length that I finished it just a few minutes after getting home. I'm thinking of either doing to Portrait of Dorian Gray next, since it's kind of a similar theme I think, or Robert Louis Stevenson's most famous, Treasure Island. My dad read it to my brothers when we were wee bairns as a bed time story, and major plot points are saturated into our culture but I think it may be worth revisiting, especially now that I can appreciate what a truly good author he is.

The girls have sorted out a rental car. I'll take the train into Melbourne in the morning to catch up with them there. As to the car, on Tuesday (Monday is "Easter Monday" here) I'll take it to the mechanic across the street to assess the damage and also call free legal aid to see about my options.

Anyway, that was my day.