The Original Series
Hark! Last night I achieved a cultural accomplishment 66 hours in the making! I have watched the entire Star Trek Original Series. As a fan of science fiction I'd felt for awhile like it was something I should do. I fondly remember watching The Next Generation in the 90s. Since that time I haven't been as fond of the later Star Trek frenchises, but the cultural references to the original series always seemed perplexing yet authoritative, like references to Egyptian hieroglyphs only a very erudite egyptologist could understand. I wanted to be in on these arcane secrets, and verily, I have looked upon these ozymandian works ... and may have despaired if I hadn't started to have it on the second screen while doing other things. Anyway, like the tourist's quick perusal of the Sphinx's mysteries whilst eating at the pizza hut across the street, let me give you my general observations:

It begins with a "I'm not used to having a woman on the bridge" comment in the first five minutes by then-captain Pike. Certainly anchors it firmly in the sixties right there from the start! One of my favorite classes in college was actually a Soviet film class, which I liked because all the themes were so clearly a product of their time and place (the hero was always a humble worker and themes focused on the group effort), and altogether the whole Original Series was just as much distinctly of the 60s. Themes almost obsessively hit on the triumph of human emotional intelligence over "cold logic," whereupon it was Spock's role to be the foil. It's a real testament to him as an actor that he became so beloved considering he was essentially the fall guy in many episodes. I was annoyed because often what he was claiming to be "logical" and our "heroes" disagreed with was actually clearly illogical and the "right" decision should have been arrived at by his logic anyway. And in at least one episode he ends up in charge of the Enterprize and does so incredibly badly at it for "lack of emotion" that it was really painful to watch and I felt very bad for him and angry at these idiotic writers.
The theme of over half the first season's episodes seems to be that they've stumbled upon a hyperintelligent race with godlike powers who looks exactly like humans but wants to test our protagonist's heroic benevolence yet again. I felt this same plot conceit was starting to get really old but by the last season they had more interesting plots.
It's really true that Kirk gets with a woman in nearly every single episode. If an attractive new bridge ensign walks in in the first scene you can sit back and say "oh I guess there will be no attractive alien to seduce in this episode, it will be this girl," and sure enough he smiles leeringly at her and makes some comment about never seeing her before and you know it's on. Again, very interesting insight into a culture where apparently it was laudable for the big boss to be flaunting his sexual sovereignty over all in his domain. Watching from the vantage point of this day and age one just keeps thinking of the rampant HR complaints he would be getting.
Kirk spectacularly overacts everything. I know this is kind of a meme but seriously he's a terrible actor. And a sub-theme of the series that seems to grow as the series goes on is that Kirk is a smarter better commander than anyone else can possibly be and even if he's not the one writing the scripts it starts to seem kind of tediously self-congratulatory.
As mentioned, eventually I just had it going on my second screen because the slower pacing of shows back then and plots that I sometimes found annoying made it tedious to try to give it my full attention but I did want to get through all of it.

The Next Generation
Towards the end of my OST watching really I was just chomping at the bit to get into TNG, of which I had fond memories. And as I'd only caught the tale end of it really, the likes of "Tasha Yare" were just an obscure name from history for me, I wanted to know how does it begin?? As such, I've watched the first episode now and intend to continue on through the series.
Observations on the first episode: Wow Picard is really kind of a hardass in the beginning. He comes across as stern and scary, though he can turn a sudden smile which is all the more valuble because he was just scaring the bajeezes out of a subordinate. And unless they do a sudden turnaround in episode 2, so far it doesn't look like he's just putting on a scary act to scare the new crew but actually was more stern and scary in the beginning.
Counselor Troy is like third in command, right after Riker? I don't rememeber the latter episodes all THAT well but I feel like her relative importance must have gone down later, because I remember as more of a background support character and I think Data or someone was the third in command.
Also no one has gratuitously angered the contemporary HR gods or otherwise seduced any green alien women, though Riker and Troy have been eyeballing eachother something fierce. I guess by 1987 they had figured out that workplace romance is supposed to involve thoroughly mutual desires, unrequited angst, and possibly consummating any acts off-screen on your own time. They also imply the two had a history, which also makes workplace angst more understandable. 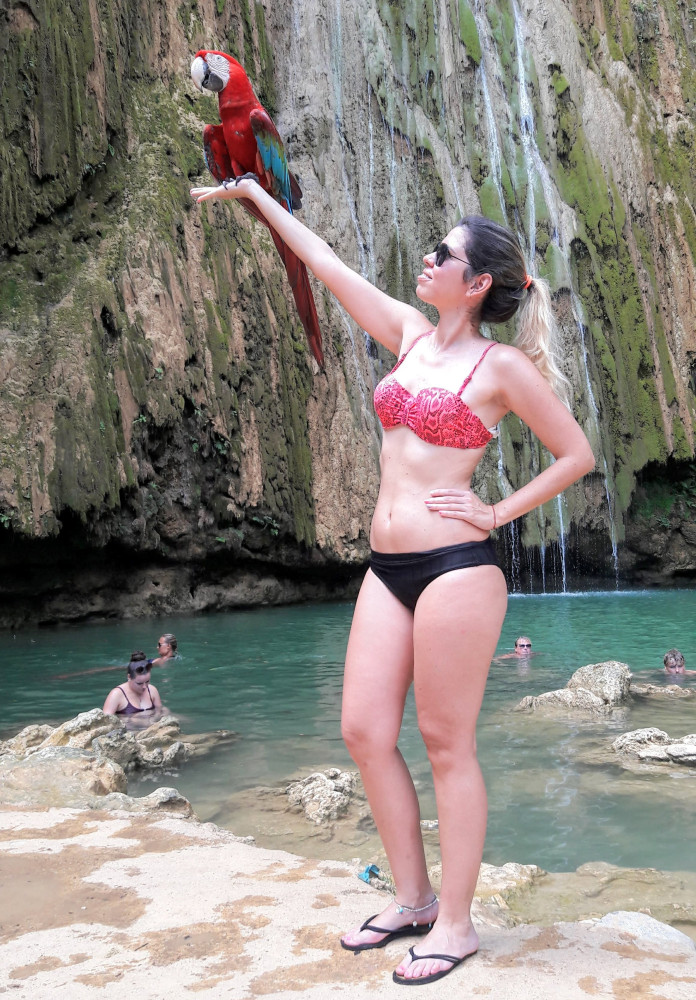 And here's a totally unrelated picture that didn't fit in the Dominican Republic entry but I liked it and every entry needs a picture so here it is!