Once upon a time there was a solution for everything. Sail blowing out of it bolt-rope in mid gale? No problem. Just enthusiastically signal to your captain that you've got it in hand, pretend not to notice the look of relief on your watch-mates somewhat green faces, and head down the bounding deck. Resist the urge to jump or run, as the deck is unpredictable and may suddenly fall out from under you or bound up to hit you in the face. You will probably have to keep one hand on a rail. You may have to time crossing the main deck to avoid roiling waves pounding across it. Cross to the lattice of thick black lines that rise from the ship's side like a ladder leading to the top of the mast. Make sure you're on the "weather" side of the ship, that is, the side the howling wind is coming in from. Since you'll be climbing up the outboard side of these shrouds, the wind will be pinning you to them from this side, whereas it would be trying to pluck you off from the other. You can easily get on the shrouds with a small hop at the moment the ship is at the top of a roll, then the deck will fall away beneath you and a quick pull brings your now levitating body to the shrouds, assuming you were holding on to them. You were holding on to them right? If not, you could be anywhere by now. The horizontal "rat-lines" are secured to the vertical stays by wrapping of a tarred twine called "seine twine." In fact the verticals themselves are also wrapped in a protective layer of seine twine all the way up. Hopefully this is all very secure, but just in case you'll be holding on to the verticals since they're more dependable than the horizontals. And up you go!
Now the ship is of course bucking and wildly and swaying in a manner that gets increasingly magnified the further you are up the mast. Sometimes you'll be pinned to the rigging, sometimes gravity will be pushing you up itself. You'll have to actually climb upside-down up the futtocks-shrouds to get out on the yard, but that's the fun part. Here in Australia they make you clip a caribiner into a fancy nylon safety line the whole time you're doing this, which takes nearly all the fun out of it. Now you walk out the yard (mistakenly called the yard-arm by many non sailors, but the yard-arm is just the end of it), balancing on just one foot-rope. At those point you are flying wildly in just about every direction, left right, up and down. You just learn not to take the downward pressure of gravity for granted and hang on. It's really quite exhilarating.
But now here is where the sailor's magical fix-all comes in. As a sailor, you will at all times have several lengths of this tarred twine hanging from your belt. Some will be about a fathom long, which is to say as long as your spread arms, and you wear them in small coils. The half-fathom pieces one just hooks to one's belt with a simple cow-hitch, like attaching a luggage tag, and the strands dangle towards your knees. Do not forget about these when you go in the engine room or it might end very badly. But you're not in that black hot stuffy nauseating abyss, you are flying around in extremely fresh air! So in this scenario the sail is threatening to come loose in the blasting gale which will cause it to rip itself to shreds and maybe take things it's attached to with it. The piece of sail which has come loose is flapping so wildly and strongly it's making a sound like distant rumbling thunder and you might lose a finger if you just try to grab it. But it must be gotten under control with alacrity! So you grab one of those "nips" of seine twince and pass it around the blown out sail, tying a contrictor hitch on the back side of the yard so you can tighten it to bring the wild thing under control. But constrictor hitches can slowly slip again so best to follow that up with another nip with a round turn and a half hitch. Later when the weather moderates the sail will have to be taken down, repaired, and reattached... with seine twine "robands."
Meanwhile while you're up there maybe you notice a block (pulley) that's banging around, that's okay, you've got another nip of seine twine on your belt! Once you've secured everything you can plausibly do up there it's sadly time to go back down to deck before the captain accuses of you skylarking.
Back on deck everything from the deck boxes and small cannons to small personal gear in the bunks is lashed down with, you guessed it, seine twine! When we aren't securing things with seine twine, marlinspike sailors are often putting fancy decorative patterns on things with seine twine. In fact one of the primary ways sailors of ye old timey traditionally rigged ships recognize eachother anywhere is they often have a permanent irremovable braid of seine twine around their wrist. I've been randomly recognized for a sailor in airports, on trains, and once very unexpectedly on a bus in the middle of Africa between Kenya and Tanzania by a red cross volunteer who also it turns out has a habit of sailing on tallships.

Last April my current vessel, the honda civic USS Trilobite, was collided with right on the broadside. As a consequence the passenger side door would not close and threatened to randomly swing right out while driving, which would be quite undesirable. I may not sail much these days, but to me, there's still one solution for all such problems: seine twine. 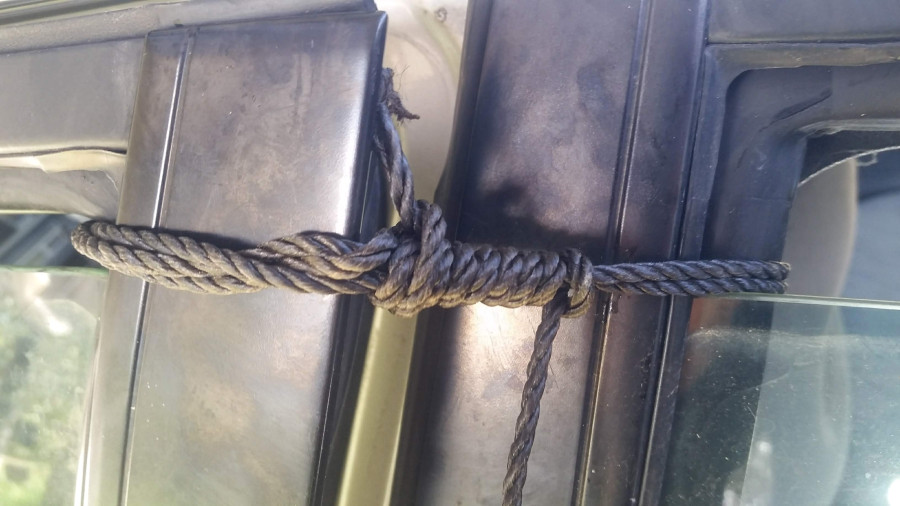 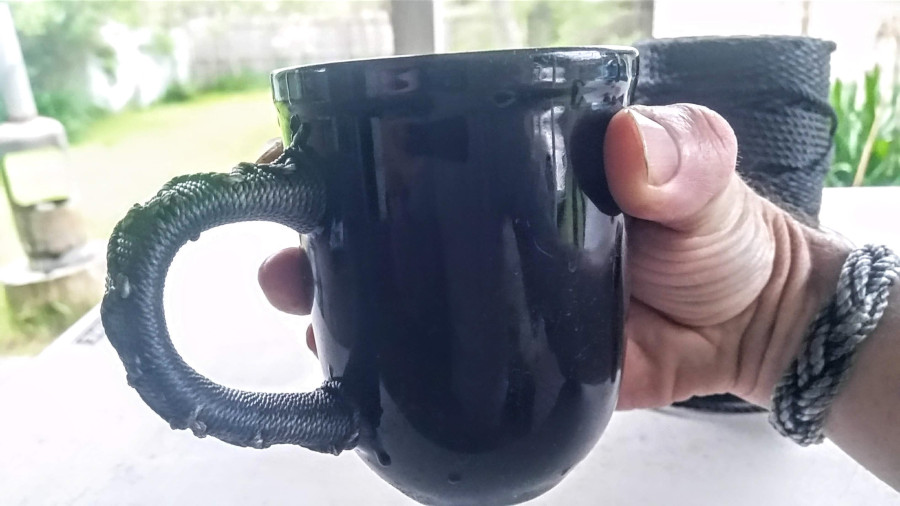 The seine twine fancywork on the handle of my favorite mug, as well as the turks-head on my arm and the roll of seine twine
(see also, this "french hitch" pattern makes a zigzag pattern on the handle. Golly these pictures make my thumb look huge)

Posts from This Journal “sailing” Tag

Posts from This Journal “sailing” Tag