Last Monday happened to be a rare nice spring day following a week of cold rain, followed by cold rainy days ever since. But Monday was nice, so I got as much work done in the bee-yards as I could and then in the evening, I set a chair at the far end of my yard where it would get sunlight for the longest before the sun disappears behind the house. The apple tree under which I set my chair is still mostly bare though beautiful blossoms have burst out on a few specific branches. Behind the chair my lavendar plants are looking nice and lush with an abundance of purple flowers.
The book I began reading carried the dauntingly dull sounding title of "Scientific Queen-Rearing." Published by "GM Doolittle" in 1889, it's still regarded as one of the best guides on the subject. I was pleased to find that despite the title it is written in a pleasantly meandering style, as he puts it himself in the preface "as if I had taken the reader by the arm, from time to time, and strolled about the apiary and shop in the time of queen-rearing, and chatted in a familiar way on the subjects suggested as we passed along." and "my style, I fear, is often like my bee-yard, which in looks is irregular, while it attempts something useful. I never could be pinned down to systemic work. I always did like to work at the bees near a gooseberry-bush, full of ripe, luscious fruit, or under a harvest apple-tree, where an occasional rest could be enjoyed, eating the applies which lay so temptingly about."
Presently, as I sat in the pleasant evening air I began to grow sleepy despite the engaging book. My mind began to drift towards the pondering of obscure philosophical paradoxes, so I decided to walk into the house and make some Russian caravan tea and return. So I finished the chapter I was on and got up and made my way towards the house.

Halfway across the yard I noticed about eight bees close together on the grass. I knelt down to examine them as this seemed unwarranted. There are no flowers in the grass, it's far enough away from the one beehive in the yard for them to have no reason to be walking here, but here they were. This was just a mild perplexity until I realized one of the bees had the distinctive long abdomen of a queen.
One does not encounter queens randomly outside of hives. It simply does not happen. A queen does not simply decide to go for a walk. Queens leave hives for only one of two reasons: (1) they are with a migratory swarm of bees (of which "8 bees" is several thousand bees short); or (2) they are on a mating flight, during which I do not believe they stop and rest anywhere, and are not accompanied by any worker bees.

"You won't read that in a book!" was a favorite phrase of a beekeeper I once knew, and I have found that eventually one will encounter bees breaking every rule you think you know if you keep at it long enough.

I reached down to pick her up, she was very quick-moving and evasive, which leads me to believe she is very young, but I was able to get her into my cupped hand. My only hypothesis for this whole situation is that she was on a mating flight and became tired and crashed in my yard to walk a bit, and the other seven worker bees joined her just because workers are always attracted to a queen.

Now that I have a lost queen in my hand what do I do with her? As I look up at my porch I see the two hives I had set up as "nuc boxes" (short for "nucleus") there, for the express purpose of rearing queens. The white boxes are up on the edge of the porch like the cliff-face edifices of Petra, Both were already outfitted with about 1500-2000 worker bees, a very minimal amount. Usually one blows smoke on bees to calm them before opening a hive but I had a queen in one hand and no smoker about, but such a minimal number of bees will permit an examination if one is very polite to them. I thought the larval queen I had given the first of these nucs hadn't successfully emerged but on this inspection I found a single white little bee egg deposited in the center of each cell, clear evidence a queen has set up shop.
The second nuc appeared to have no queen. Normally when introducing a queen one inserts her in a little plastic mesh capsule like a spaceship's escape pod. Recognizing that a queen doesn't smell like THEIR queen the bees otherwise will likely kill the newly introduced queen. But again here I was with a queen in one hand with no escape pods. But this box had been queenless for some time already so I hoped optimistically they would accept her based on having been queenless so long, dropped her in and quickly put the lid on before she could fly out.

This whole situation was beyond strange. Not only is a queen reduced to walking on the grass in a random location in of itself extremely unlikely, but of all places to land, to do so directly between a beekeeper in the act of reading about queen rearing and the queenless hive he's prepared to receive a new queen is such a preposterously serendipitous circumstance that were this a work of fiction I would never propose such an utterly implausible situation.

I then made my tea and returned thoughtfully to my seat. 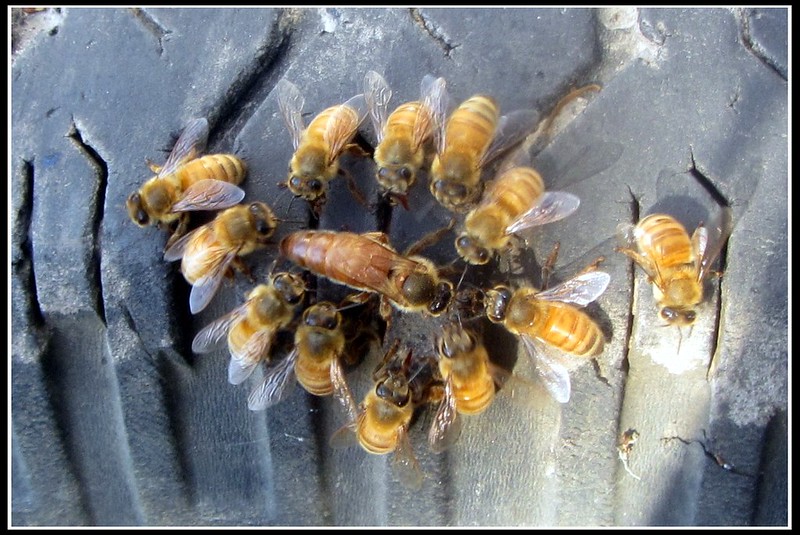 A queen I found outside a hive some years ago, in this case it was just beside a hive I had been inspecting and it's certain she had accidentally fallen or fluttered from a frame as I held it and landed on the wheel of my truck a few feet away.

Tuesday morning I couldn't wait to find out if Queen Serendipitia had successfully joined the colony. Still in my pajamas I rushed outside and urgently looked to see if there was a dead queen laying on her side just outside the hive's entrance. There was not. Apologizing to the bees for the cold I lifted the lid and removed a frame of bees. No eggs or queen. I removed the second, still nothing. It takes a few days for a queen to start laying, but with this few bees I should easily find her herself. Then I looked down through the hive at the hive floor, and there she was, apparently having an argument with a worker.
I thought about putting her in a cage now that I had more time to prepare, but if they were going to kill her they'd have done it by now.


Wednesday, today: I tried to resist the urge to open the nuc box, I shouldn't disturb them every single day. But it's so easy with these nuc boxes, not having to light a smoker or suit up, and I was dying of curiosity. No dead queen outside. I opened the hive box and removed a frame and... there she was, placidly moving among the bees on the frame exactly the way a queen should.

I'm very curious to see how she'll do. That I found her walking on the ground doesn't bode terribly well, what if she didn't succeed in getting properly mated and therefore can't lay very many eggs? Fortunately she's right on my porch so I can very easily check up on her! Though I'll tryyyyy to resist doing so every single day.


Related: a story about another bee I got to know as an individual: Melissa

Posts from This Journal “honeybees” Tag

Posts from This Journal “honeybees” Tag