A Week in the Life of a Beekeeper

Tuesday Dave, Ryan and I set out on Dave's boat. We left the dock at Newport Beach marina around 11:40, and thus had no idea there was a 5.8 earthquake at 11:42 until people started calling us about it! It literally happened minutes after we cast off!! I was so pissed!!!
Anyway we spent the night anchored in Little Harbour.

Wednesday we caught a yellowtail tuna and after floating around and doing more fishing on the backside of Catalina we returned to the mainland. Total time at sea: 27 hours (we couldn't even go ashore at Little Harbour because we don't have a raft or other means of getting to shore without a dock other than swimming!)

Thursday we went up to the bees to medicate them against the fungus Nosema apis. Nosema causes bees to paint their porches polka dot, which is a major faux pas (okay actually it causes them to defecate wildly, causing yellow spotting on their hive entrance). To do this we mixed 100 lbs of sugar with a roughly equal volume of water and (a much smaller amount of) an antibiotic to create a medicated syrup. We then gave this to the bees by putting it in specially designed troughs that fit into the hives. I also took some pictures of other miscellenious activities related to taking care of the bees (since crackin open the boxes, the most photogenic activity, is really only a small percentage of what we actually spend our time doing)

Friday we wrestled with reassembling an extractor that had been assembled slightly wrong. Guess the owner of Maxant Industries had come in and assembled it personally and made a mistake ("hahaha that sounds like something I would do!" - Dave). So the owner (Mr Maxant?) personally doodled a schematic of how to fix it and faxed it to us. I should have taken a picture of it I think it looked slightly silly.
We also transferred some honeybeer from the primary fermentation vat to a carboy for conditioning, and I organized receipts and other paperwork. We called around to order 750 lbs of sugar (!) to make enough syrup to finish medicating our hives.
Then we were done around noonish. Living the dream. (= 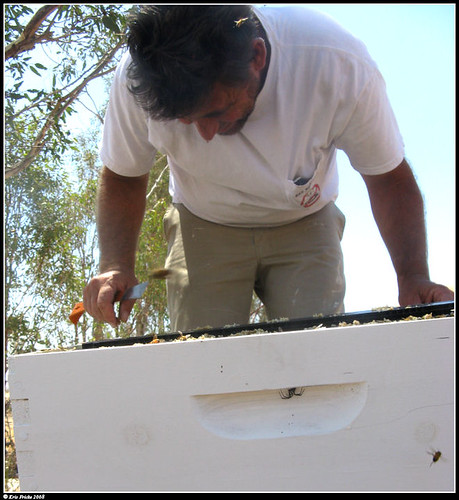 Black Widow waiting in the handle for the unsuspecting