Yesterday. appx 3pm - I am working under a sparce stand of tall yellowgum eucalyptus trees. The weather is hot and muggy. I'm wearing the light bee veil, the one that looks just a vague bag of netting over my head. And that's only because of these really annoying flies that insist on trying to get in ones eyes, especially when you're holding a frame of bees with both your hands and can't swat at the flies.
The sky is an opaque white and visibility is only about a quarter mile before things disappear into the white haze. At the very edge of visibility giant windmills slowly turn in the smokey haze. For the last two days this smoke from the major bushfires consuming the eastern seventh of the state. Despite the sky appearing to be "overcast" more light seems to come through than if it was normal rain clouds, surreally lighting the landscape with just the faintest bit of an eerie yellowish orange tint.
The "Vic Emergency" app dingles again with its weirdly innocuous sounding chime and I look at my phone again, but it's just another "storm warning," it's been issuing them seemingly every ten minutes for various parts of the state but here things have been calm. I go back to inspecting the hive.

Hive Y121 Yavin has queen cells. Evaluation of various factors indicates the hive is building them to swarm (as opposed to replacing their own queen), which is very odd since it's long past swarming season and the hive isn't even particularly crowded, but bees can be quite inexplicable. I gaze at the slowly twirling arms of the nearest windmill for a moment in thought. The top appears to be more visible thna the base due to the smoke hanging low over the ground. These appear to be well-formed queen cells, I could take them back to the one hive at my house and use it to incubate them for the week it will take for them to hatch and then distribute the queens to hives that could use a new queen. I look at the four hives left to inspect in this yard.. I should move the queen cells quickly and besides I already finished both my water bottles on this hot humid day and haven't taken a lunch break yet, so I will deal with these queen cells, get more water, and come back to finish.

Just as I close the door on my truck there's a flash that lights up the opaque hazy sky from indeterminate direction, followed a few beats later by a loud crack of thunder. As I'm driving down the dirt road the rain begins to fall. I roll down the window to smell the delicious scent of fresh rain on the fields. I rain soaks my arm resting on the windowsill but I don't move it, it feels so nice and refreshing.

Ten minutes later I'm in the general store in the center of my village of Birregurra. I buy tonic water and a package of bacon and a milkshake, and sit down on the front porch under the awning to enjoy the milkshake as the rain pours down around me. The vic emergency app is now advising me of flash floods in various places.

A woman comes in and says she wants to return some honey. My honey I see. I jump up and approach her at the counter:
"What's wrong with the honey?" I ask with concern.
"Oh, um," she says, a bit startled, as I am by all appearances just another customer "I just don't want it"
"Oh.. nothing's wrong with it?" I ask,
"Someone gave it to me as a gift but I prefer the liquid honey in the squeeze bottle"
"Oh." I say, trying not to look judgey
"It's for the kids" she says self consciously "you know, they expect the liquid squeeze bottle" uhuh sure lady. But I retreat back to my table. 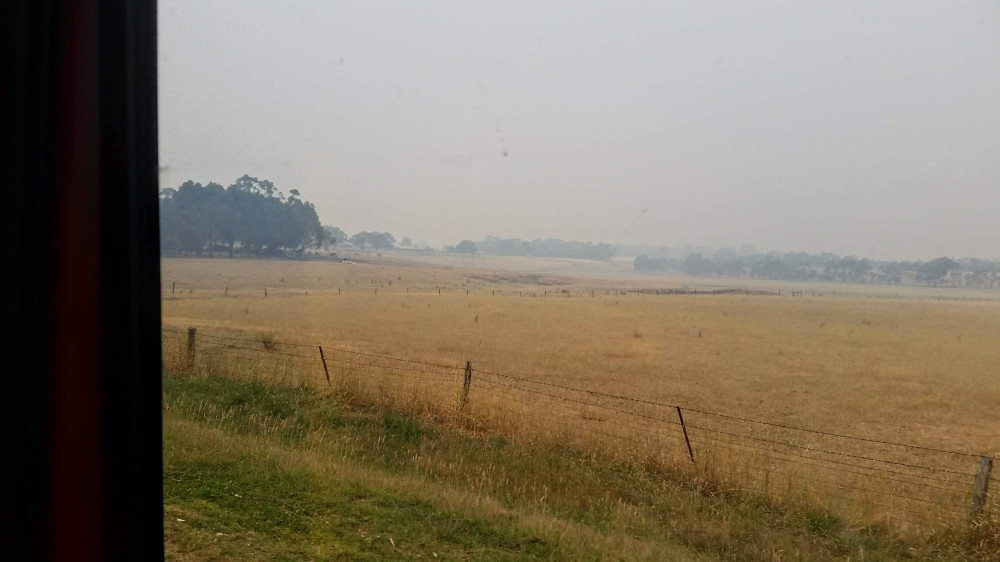 On facebook messenger my friends are asking who is going to pub trivia tonight. I've just written "Yeah I've got a lot on but I plan to go--" when the fire brigade app blaats its notification noise. I quickly enter out of messenger and read the message.
"ALERT WSEA11 G&SC1 GRASS & SCRUB FIRE 675 INGLEBY..." which is all I read before I grabbed my purchases (and half finished milkshake), jumped in the truck, and headed around the corner to the fire station. Moments later I was looking out the window at the smoke filled fields outside town. It was no longer raining and was once again just the eerie white haze. I've been in firetrucks looking at smokey landscapes plenty of times, but usually in distant firegrounds. For my own town to look this smokey and to be seen through the window of a fire truck was very disturbing.
The location described, "Ingleby" is an area I have a number of beehives. The location of the fire was hard to locate because while normally you can see the smoke, the smoke was in this case obscured by the fact that there was already smoke everywhere. But finally after some radio chatter to clarify the precise location we joined a line of three firetrucks entering the appropriate field. We pass singed sheep going the other way. Trucks already on the scene had already put out the worst of it and we just spent two or three hours or so putting out all the smouldering bits on the edge. At a slow moment while we refilled the tanker from the nearby creek I mentioned to our fire captain that I had a package of bacon in my truck and he called his wife and she moved the bacon from my truck cab to the firehouse fridge. "Legend!"

It wasn't until I got home and was able to recharge my phone, which had meanwhile died, that I realized I had sent a message saying I was going to trivia at the moment the fire alert came in. Oops. Also of course the remaining half my milkshake was tepid and melted upon return to the station. I then installed the queens but I'm not sure how their several hours of uncontrolled temperature did for them.

That evening I spent several hours proofreading my friend Billie's gender discrimination legal complaint against the forestry fire department. Last year the remote station she was posted to kept sending all the males to all the fires while all the equally qualified women were relegated to cleaning the firehouse and trucks and other menial tasks. She filed a complaint with the department and they spent five months claiming they were investigating before obtusely declaring that they had found no discrimination, and then they abruptly cancelled rehiring her. As she poignantly puts it in her conclusion:

"I am now writing this last, at home and ringing earthmoving contractors in the hope of securing a casual position offsiding, while a state of emergency has been declared, the whole of East Gippsland has been evacuated, and the fires have reached a stage of catastrophic intensity. International and interstate firefighters have been flown in, and the defence force has been mobilised, while I am unemployed, but fighting fit, qualified and experienced, 15 minutes from 2 DELWP depots, and 50 kilometres from the fire front. My ‘go bag’ is still sitting in the corner of my bedroom, packed with my freshly laundered greens and uniform, along with my helmet, now utterly superfluous. I cannot see this progression of events as any other than intensely personal."

So now she's preparing to complain to a higher authority. I hope it gets somewhere.

This kept me up until nearly 1am. Which is why I was sound asleep at 5:17am when the fire brigade app went off again about a brushfire in the forest by Barwon Downs 9 miles due south of here. 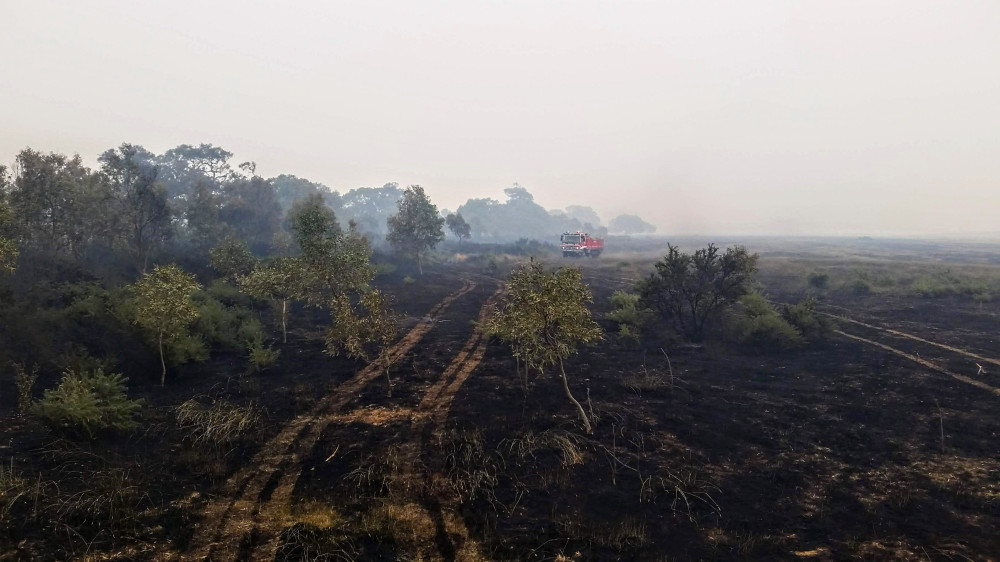 The major brushfires making the news are far from here and it's still been relatively green around here, but the heart of the fire season here is usually February-March so we've been saying it's not bad here yet but it will get bad when this area gets dry. This morning waking up to a second local brushfire nearly back-to-back with the previous one I wondered nervously, has the moment arrived?
Tags: australia, birregurra, fire brigade, victoria
Subscribe