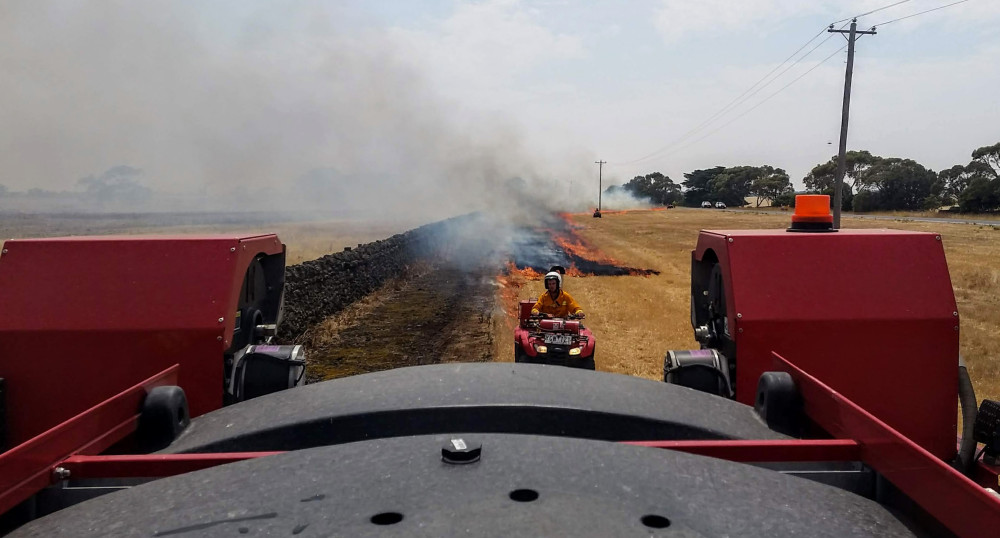 On Sunday several of us traveled in Birregurra Tanker 2 to participate in a planned burn in which they burned off a swath on either side of a highway for about 20 km to make a long barrier to any future unplanned fire this season. This was my first away mission in actually one of our own trucks with our own crew. Also, for once I wasn't the youngest crewmember! Usually it's me and a bunch of grey-hairs but this time it was me and two guys who seem about my own age, the wife of one, whom I think may be a few years younger, and this 18 or so year old with dark fabio hair. Two of the others were very new so somoene made a joke about "a truck full of newbies" and then Eddie, the other non-new guy, who was driving, said "Kris isn't new" and it was the first time it occurred to me that I might not be the newbie anymore!

To do the burn they had the trucks lined up going along thoroughly wetting down the stone barrier wall and grassy fringe which ran 20-30 meters parallel to the highway, while behind the truck parade ATVs with drip torches set the grass on fire, followed by several follow up trucks to make sure the fire behaved itself, as well as sometimes a truck going around and standing by on the far side of the wall.

After lunch I we rotated me into the radioman position in the truck's front passenger seat instead of out back with a hose. Because that only required me to actually do something once after twenty minutes or so I and it was mid afternoon after getting up really early I found myself desperately fighting not to fall asleep. I much preferred being on the back! The people who feel important being the radioman can keep it! 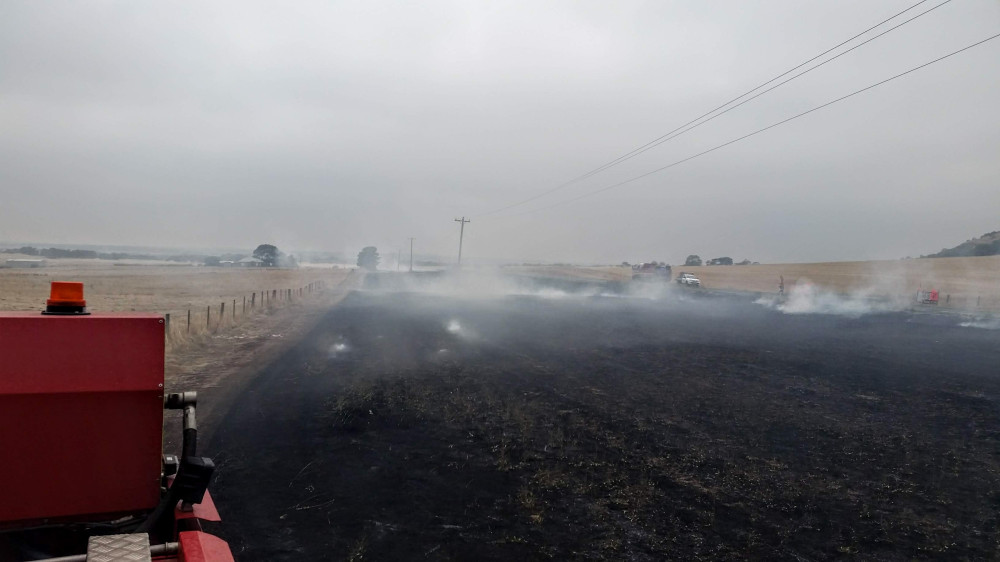 Yesterday, Monday, it was once again cold and rainy. I really need to actually keep a tally of how many nice days we get in summmer here it sure feels like it's a number I can count on one hand. Especially if you don't count the days the slap a "total fire ban" on because on such days I can't work. Tomorrow it's supposed to be 84f and raining and they've slapped a TFB on it. Basically the only nice days I get to do work on are the few that fall in the narrow band of the 70s Fahrenheit. 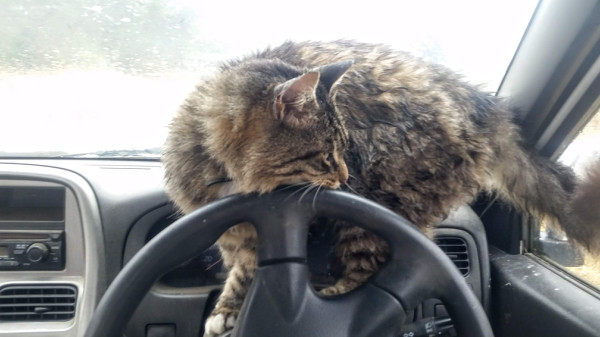 But so a funny think that happened yesterday. When I came back to home base to move some empty beehives from one place to another (because el bossman is going to put cows in that field), Cato came out to greet me, and he was looking very wet and bedraggled. So I invited him into the truck cab and closed the door and spent a few minutes patting him until he had quite the purr on. I've tried driving with him in the car before and he gets thoroughly freaked out. But having gotten him really calm I turned the truck on, then gave him a minute or two to get used to the vibrating truck, and then drove at cat-walking speed to where I was going to pick up the hives. He jumped up and spent the short drive with his hind feet on my lap, his front paws on the door or dashboard, looking around in fascination. When I arrived I opened the door and he jumped out and seemed astonished to have teleported. When I had driven him before it was a few hundred meters around a tree line, to a place he'd probably been before, but I think the locaiton change might have been too compelte for him to wrap his mind around, compared to this move of 40 meters where he could see where we started 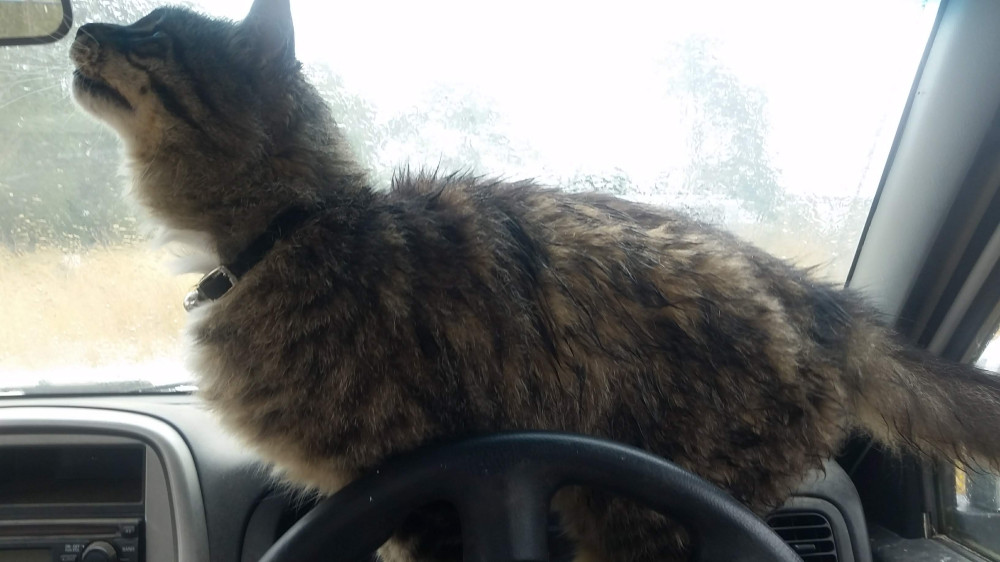 While I loaded the boxes on the back of the truck he looked around and settled on sitting under the back of the truck. This only took me a few minutes and when I was loaded up I got back int he cab and called to him. He came and hopped in! The one previous time I had driven him he had declined to get back in and had walked back to the workshop. I drove the 40 meters back, he still looking out the window in fascination. He hopped out when I opened the door and looked around again as I unloaded the boxes. Got back in the cab, called him, and he hopped back in! We did this for three loads. Adventurecat! 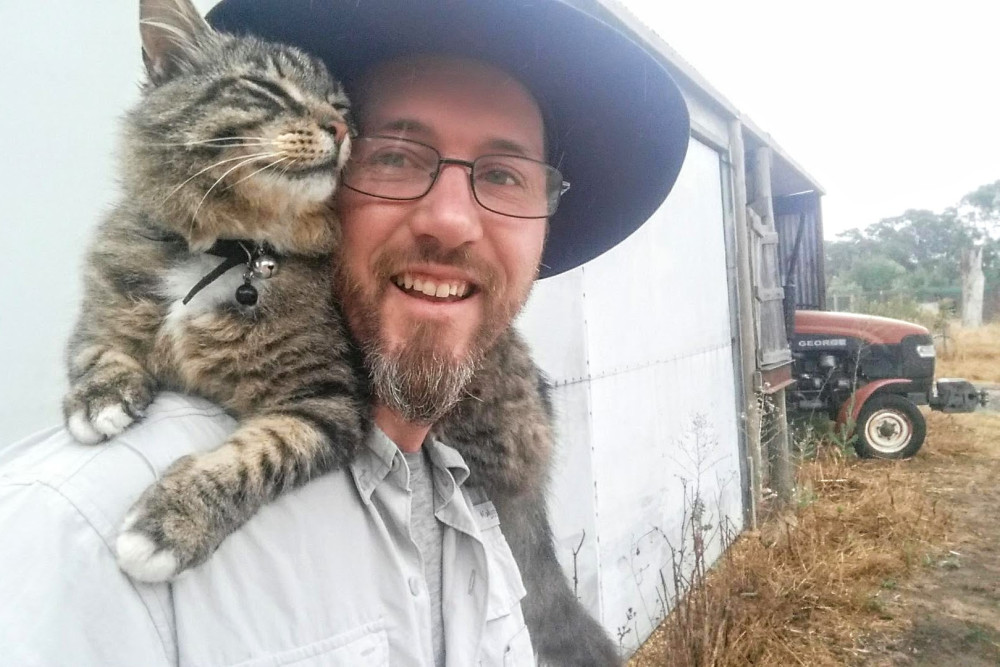