The Making of a Yarn

A Yarn
Yesterday, Saturday February 15th - We didn't really have a plan other than to go to the historic sheep station just outside of Birregurra in the morning for coffee and a scone, and it turned into a day long adventure (a good one) though we never got our scone.

"Sheep stations" massive tens-of-thousands-of-acres sheep operations, are an important piece of Australian history, and apparently this one right here, Tarndwarncoort was actually the first one! Founded in 1840, they pioneered the polwarth sheep breed adapted to the local climate. Once 15,000 acres, the core of the operation has been whittled away down to 60, though many of the adjoining properties are also still in the hands of descendants of the original Dennis family. A beautiful grand old bluestone house still sits on this core lot as well as some historic outbuildings. (I didn't get any good pictures really but if you click the link earlier in the paragraph you can see some)

I had been fortunate that in about my first week in Birregurra town I was invited to a party at "Tarndie." Someone on whose land I have hives had invited me. The party was to celebrate the launch of the refurbished "cider house" as an accomodation. At that time I was introduced to the very nice family who own and run the place, the same family who has lived there for [???] generations since the founding in 1840.

So on Saturday we popped in there. We found Tom Dennis, 40ish, entertaining some guests who appeared to be eating carrot cake and coffee, on a the table under the leafy veranda of the wool shop.
"My parents are here from California!" I announced to him
"Oh these people are from San Diego!" he said.
Too funny. It turned out to be a woman originally from Chile, her mid-20sish daughter, and the daughter's Australian boyfriend whom she had met while backpacking in Guatamala.
We went on a little walkabout around the grounds and then were perusing the wool store -- they sell yarn from their own sheep in their little shop, hand dyed locally with natural dyes -- when Tom mentioned the other group was about to go on a tour of a woollen mill, which was just under an hour away and the tour was beginning in an hour! So mom purchased some wool and we dashed out the door without pausing for the planned for coffee-and-scones! 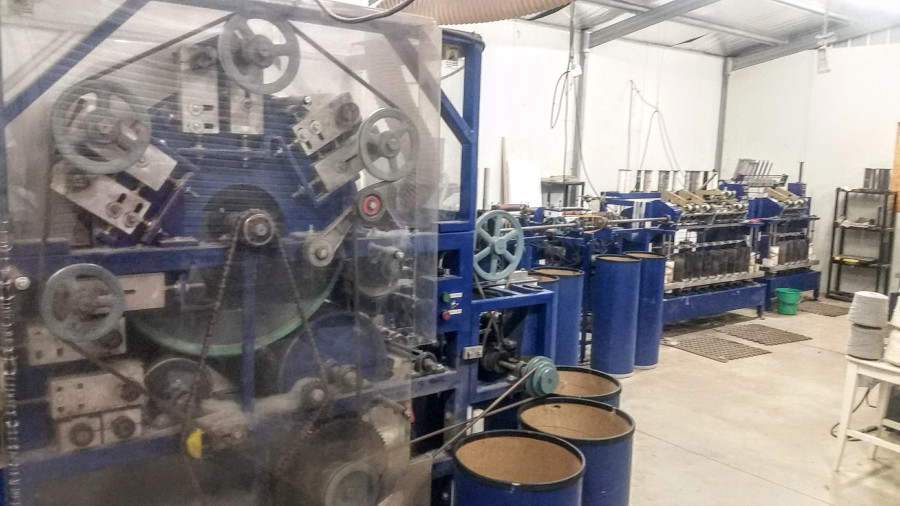 So we went driving out west through and beyond Colac town, through the rugged "Volcanic rises" area.. out just past the town of Cobden where I was fighting a fire two years ago or so.. and sped past the woollenmill and had to make a turn and come back because it was so small and easy to miss. Basically just a big shed by a house. One car in the parking lot which was of course our friends the Chilean-Australians.
The Great Ocean Road Woollen Mill is run by this shortish guy and his possibly-European wife (accent.. dutchish?). They have machinery to turn alpaca or sheeps wool into yarn. The guy stressed that he's "not a greeny" but the mill is almost completely self sufficient, generating something like 85% of its electricity from solar and all of its water collected on site, and very little waste going out.
But yeah so they can do alpaca from start to finish on site. Apparently sheep's wool is naturally greasier than alpaca and needs to be rinsed by people with more advanced and regulation-complaint filtration systems. He was saying that only costs "$5 per kilogram" for the washing "and yet people still send it off to china for cheaper rinsing! And that's probably because there's less environmental regulation there but it all washes down into the same ocean!" (I told you, I think he's definitely a greeny, which in my opinion is a good thing but I think it's kind of pejorative in Australian politics).
Their machine can handle really small batches so they can do yarn entirely from one of their alpacas at a time. Even though I'm not exactly into knitting it was fun seeing the machines and hearing him explain all the steps involved in taking freshly shorn wool and cleaning it and spinning it into yarn. And mom is a bit into knitting, she had even worked at a yarn store (actually so did I briefly, putting the yarn up on ebay), so she was very interested and had some insightful questions to ask.
The guy was definitely passionate about ethical production. If I understood him correctly it sounded like he had declined to do business with a customer because they were going to take his painstakingly-ethically-produced yarn and send it to India to be made into garments ("they said they wanted to give their business to the poor people in India but did they pay them Australian wages? no of course not. Hmmmmm!" 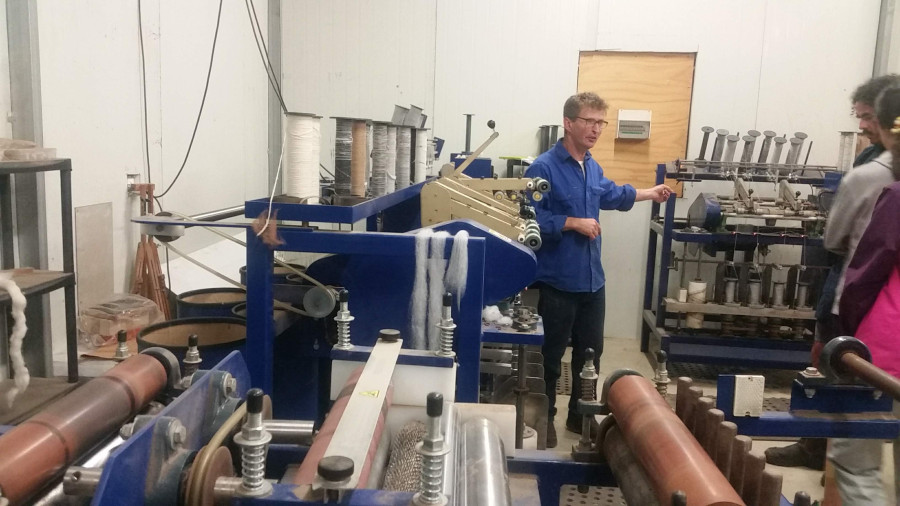 Quest for a Scone
By this time it was around 3:30pm. We asked if there was anywhere good to eat and he suggested the Distillery in the nearby town of Timboon. We headed tehre (about ten minutes), but a sign on the door said they stopped serving food at 2:00. We looked around Timboon town and every eatery was dark and closed up. It looked like people were going into the pub but a sign by their door also said they stopped serving food at 2:00. Welcome to Australia, where you're out of luck if you want to eat between 2-5!

I knew there was next to nothing between here and Colac on our way home, and really nothing very good in Colac either for that matter, and having not had anything to eat since breakfast I was kind of deliirously hungry. But Port Campbell on the coast was only ten minutes away and knowing it was a tourist hotspot I was sure it must have places open all hours. So we headed down there.
It had been grey all day but here in Port Campbell it was _cold_ and windy. "This is summer!?" dad kept exclaiming. Now you feel my pain!
We walked into a cute cafe by the beach but they were only serving tea and scones, the chef had already packed up too many things to make real food. We said we'd be back and went walking down the short main street. Long story short EVERYWHERE had stopped serving food at 2:00. Except a pizza place. None of us were really in the mood for pizza but being as it was the ONLY option we didn't have much choice. It was actually pretty busy, being the only place open and all.
They only had the basic beers and being a bit of a beer snob I'd rather drink wine than that shit, but I was so delirious with hunger I ordered a souvignon blanc when I meant I souvignon gris. Yes just what I need on a freezing day to go with my pizza, a cold white wine.
After this we walked back to the cafe to finally have our tea and scones .... only to find it was closed!! 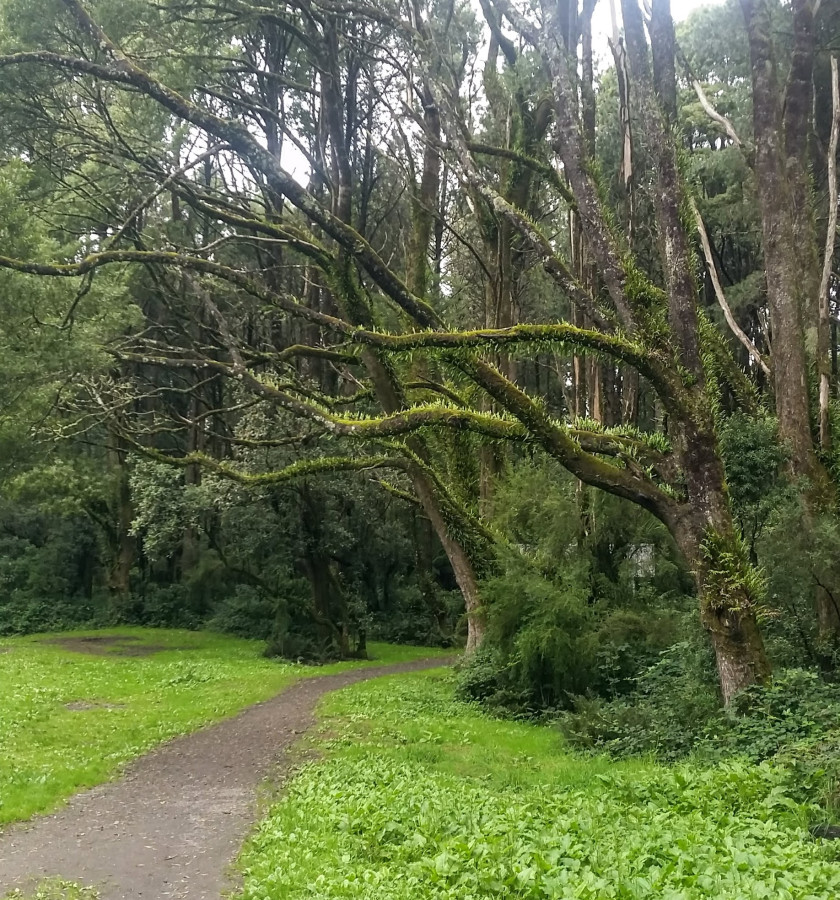 Today, Sunday February 16th
Today we decided to hike to another of the nearby waterfalls, Beauchamp Falls (locally pronounced as "Bocham Falls" I believe). This involved driving for an hour into the rainforest, where as usual I hummed the jurassic park theme music as we took the tightly winding road that weaves amongst towering ferns. I hadn't been to this waterfall in many years so I wasn't quite sure which one it was from my memory-bank of waterfalls but they're all nice. After driving to seemingly the middle of nowhere we came upon this nice parking lot with a very well maintained trail with a lot of people on it (where did they all come from??). Today the sun actually kept coming out which was nice, I'm not very accustomed to the sun actually shining while I walk in the forest here!
Round trip hike was 2.4 miles, down on the way in and up on the way out. It was very nice, amongst big leafy ferns and towering "mountain ash" eucylypts. Among the many other people on the walh, of note were two young men doing the whole thing barefoot which I just thought was so Australian.

On the return drive we stopped at one of the places I supply honey, the Otway NouriShed, to finally get our tea and scones. Well mom had this pastry calleed a "beesting" which was pretty delicious.

In the afternoon I dragged my parents along to pub trivia at the Moriac Pub (which was quite a drive, forty minutes the OPPOSITE direction from my house from where we were, took us an hour twenty to get there from the trailhead). I was worried they'd die of boredom during the first two rounds, "entertainment" and "sports," where like me they didn't have a clue on a single answer. But as usual we caught up on the remaining rounds. My friend Mick and his girlfriend and mom were there so my parents got to meet them and experience an authentic hanging-out-at-an-Australian-pub experience. At dinner there, was good. 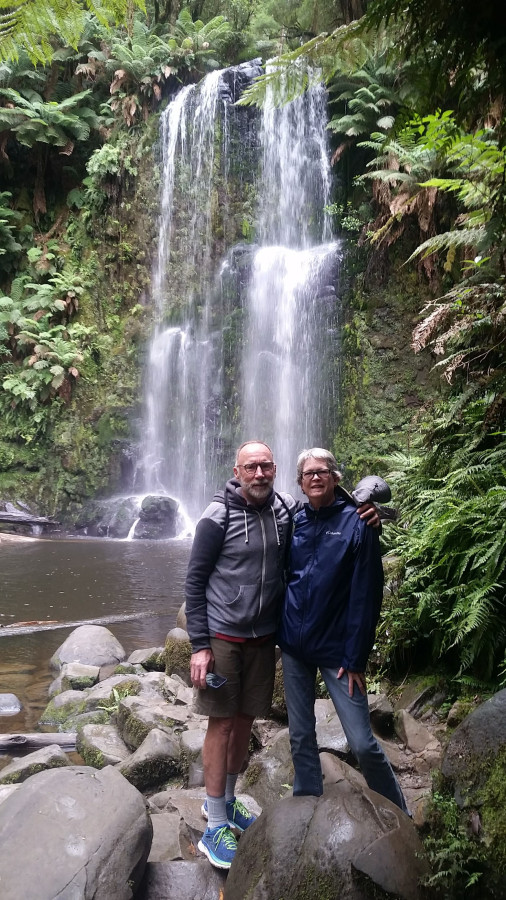 My parents and the waterfall. It doesn't look as big as it is here since you can't tell how far back it is