The Autumn of Society 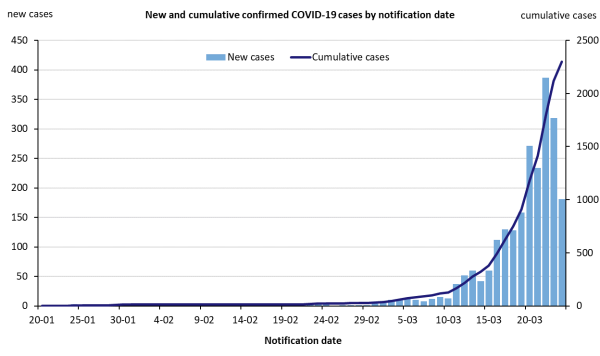 In fact this chart seems to indicate its the second day of a fall in a row and lowest in five days. But I'm inclined to also think it's too good to be true. Possibly the more stringent stay-at-home orders caused fewer people to notice or report themselves or something like that.

This morning I noticed a news item that the Australian PM had declared that "Level II restrictions go into effect tonight at midnight!" but couldn't find anywhere what those level two restrictions entailed. My friends informed me it basically just meant beauty salons are no longer classed as an essential service. Basically the interpretation thus far has been pretty much "if you have a job that's not in hospitality/entertainment, you're an essential service." ("that's a direct paraphrase" as my friend Greg put it). There did seem to be fewer cars on the roads today. Today there seemed to be really really hardly any cars on the road.

Went to work at nine as usual. It was cold and dreary so I took the work truck home to maybe do some bottling or other such futzing around while waiting for it to get warmer. But looking at the weather app I realized Saturday would be a nice day in the upper 70s while today was supposed to peak at 63. It's not like I'm doing anything more important, so I decided to take today off and work saturday. I thought about emailing el boss man this minor reshuffle of my hours but he's never seemed to have any interest in such matters.

But then two or three hours later I was sitting at my computer when I happened to see the exact make of his car drive by -- a blue toyota hilux with these beefy chrome roll bars that seem to be a standard option here. It's not a custom job, there's a few such cars around, but it was the exact same car he drives as far as I could tell. It would be wildly out of character for him to spy on me, but all of a sudden I started having paranoid thoughts that sitting at home with nothing to do, thinking about canning the beekeeping department, he had hthought to himself "what's Kris donig with the truck with weather like this?" and went on a driveabout to see if I was home. I really think it's not like him and its just a conspiracy theory but... I'd have to have had seen the license plate to distinguish that car from his.


This weather today really didn't help the whole end of the world situation. I was already feeling a bit depressed about it, before my job came into question, and I miss Cristina a lot, and then for the weather to be extremely dreary and cold today really was the icing on the cake to make for a thoroughly depressing day. And you know there's a lot of missing in a long distance relationship but I think we handle it pretty well but I would have liked to be with her while civilization is ending.


The sun finally came out around 3pm. I scampered outside and was meerkatting on my porch listening thoughtfully to the eerie silence of the new world, when my dear friend Koriander happened to send me a recording of herself singing the Mingulay Boat Song. It is a lovely somber and melancholy yet hopeful sea shanty that we would often sing on the boats at sunset as we headed back to dock. I wish I could share with you Kori singing it but she'd kill me, but she's a really beautiful singer. So in the sunny silence of our ruined world I closed my eyes and listened to her sing the Mingulay Boat Song.