March 26th - 2,616 currently active* cases in Australia, 376 new in the last 24 hours. *I might have previously been reporting the total number of cases (counting those that have recovered/died), but I think I'll try to stick with currently active so we can see when it finally starts going down. It's going to be a long few months.

Cristina reported yesterday that she couldn't smell anything. Which, of course, has recently come out as one of the most significant early symptoms, so I was pretty alarmed. But then clarified that she meant to say her friend in Spain couldn't smell -- it was just a language error. I was pretty relieved (though I'm sorry for her friend).


So I got a new phone, as I mentioned, but I was still carrying around my old one because my old Whatsapp account was on it, and I couldn't transfer it to my new phone without deconstructing my old SIM card to make it fit and I didn't want to do that. Anyway, I haven't seen my old phone since I think last Friday. When I first noticed it wasn't at hand I said to myself "oh, it's probably in the car" and it was awhile (a day or two) before I looked in the car and it wasn't there so I thought to myself "oh maybe it's in the work truck" 'and it was another day till I was able to check there and it wasnt' there, then I checked any place in the house it could be but couldnt' find it and now it's been nearly a week and I'm less likely to remember where exactly it might be nor can I call it. I went to that training thing on Friday and had it then, so maybe I'll call the hotel tomorrow [edit: called, they don't have it].
Under normal circumstances I'd probably have jumped to being very concerned about this much faster but... there's been a lot going on. But now I'm worried people are messaging me on whatsapp to see if I'm okay and I'm not responding.


Today was a nice sunny day. I was out beekeeping. As I was driving onto one of the grand old estates here, where I have some beehives, I passed a horse drawn carriage with it's two drivers standing by it in bright red jackets and black top hats. They tipped their hats as I rolled by.
When I remarked upon this little bit of absurdism to my friends they were like "oh yeah normally they're in the Melbourne CBD but I guess they decided to get out"
And I was like "Why not just stay in their stables??"
"oh they need to keep the horses exercised and conditioned so they need to pull the carriage" came back the wise answer.
"Okay, that makes sense, but why are they all dressed up??" I asked
"Oh I read about this! It's because the horses are accustomed to the uniform. They're not accustomed to being driven by anyone not in that uniform and they treat anyone in that uniform as an acceptable driver" well there you go. Apparently my friends know all the answers about horse drawn carriages.

Even though it was sunny it was still a bit cold. Plumes of smoke rose out of sight what looked to be a mile or two away. The fire brigade notification was on my other phone, so seeing these plumes of smoke I felt cut off from another sense I usually have. Things seemed cold, silent, still and isolated.

Driving away from that site a fox was waiting for me in the middle of the road. I rolled to a stop and while I was scrambling for my camera it casually entered the grass to the left o the road and then paused there to watch me. I've never seen a fox behave so brazenly before. I wonder if this is part of that animals-coming-out-because-people-have-reduced-their-activities things.I know a number of those stories were refuted but I think there may still be truth to some. 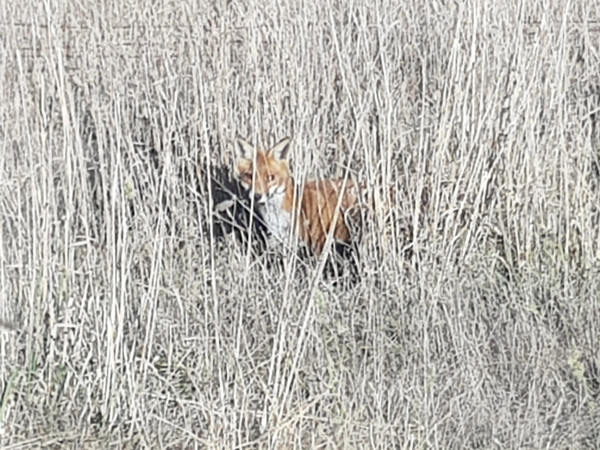 I wonder if my new phone has a shittier camera because I feel like my old phone would have done much better than that. That fox was just a few meters away and I wasn't moving! I also took several pictures of the horse and carriage none of them are even worth posting. Man I hope I don't have a phone with a useless camera


I had a hygiene idea which seems like a good idea to me. You know how some cultures have a good hand and bad hand because they apparently (formerly?) wiped their bum with their left hand? So I was thinking that in addition to everything else (social isolating, washing as much as possible, etc), of only using my left hand to touch public objects and only my right hand to touch my face. But on further reflection I don't need to use my dominant hand to itch my face and it will probably be harder to resist touching public objects with my dominant hand so I might switch the hands tomorrow (I never even touched a public object today!). Anyway it seems like a good idea to me.

[my song of the day, Manchester Orchestra - The Silence is another beautiful sad melancholy song.]