The World We're Living In.

Today I ran out of tonic water, which I had gotten addicted to back when I was always traveling to malarial places. I thought of asking my friend Joe to pick me up a bottle since the Black Pearl pizza shop, which he runs, is just beside the grocery store in Winchelsea, and he lives back here in Birregurra. But then I thought to myself "I can't ask him to risk his life for me for that" -- asking someone to go into a grocery store is no longer the casual endeavor it once was. And then I thought to myself, what a world we're living in, to be thinking that.

I swung by the said grocery store after work. I haven't been there for a week so I don't know how long it's been this way but all the staff were wearing masks and gloves. As I checked out the cashier saw me side eyeing the hand sanitizer dispenser on the counter like a crack fiend eyeing an untended baggie of drugs, and he said "you can use the sanno mate" and I was like "ohh thaaaanks!!!" and gratefully sanitorized my hands. What a world we're living in. 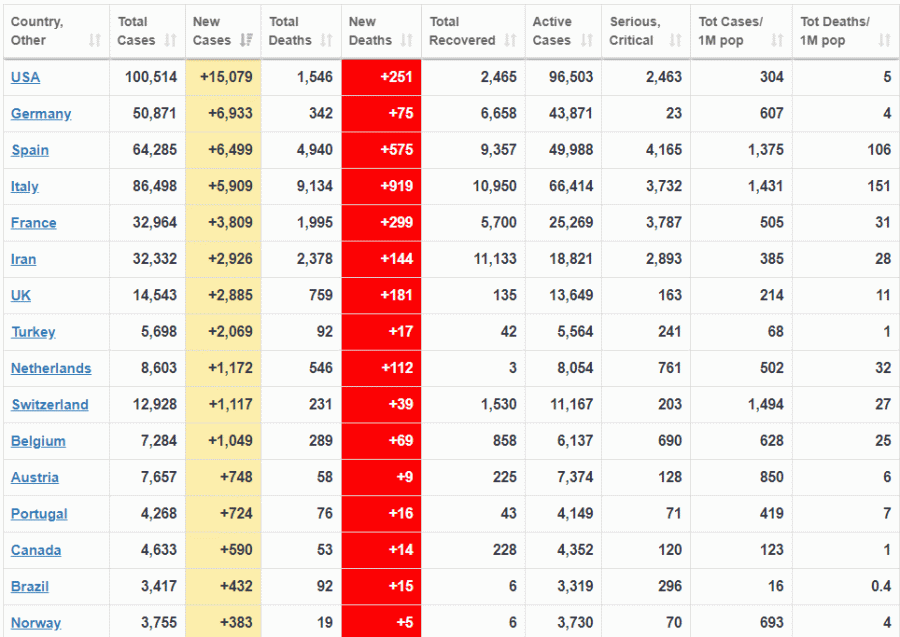 I've been looking at the chart above several times a day to see what's going on in the world, since it auto updates. This morning I noticed that if you sort by "new cases" the United States has THREE TIMES more than anywhere else.
Here's a weird thing, people with a conservative bend had a significantly greater propoensity to dispute the relevance of this. I dunno if it's just cause their guy is in charge and it would look bad on him if the US response is terrible, or if they're jsut predisposed not to worry about little things like public health catastrophes.
But they did point out that the US has a much greater population than any individual European country (did you know Europe as a whole has about twice as many people as the US though? This seemingly basic fact I didn't know till recently). I had actually made this same point myself the other day, and pointed out that some unexpected places come up very high on the list if you sort it by cases per million people -- Like Iceland and Luxembourg are both higher than Italy, and Norway and Ireland are both higher than Iran and the USA. So I posted about this the other day and peopel pointed out that the US number would be artificially low looking at it that way due to the lack of testing and places like Iceland and Luxembourg might be artificially high due to them being able to test a much more siginificant portion of their people.
Okay, so, deaths per million then. Deaths are a bit more... concrete. In deaths per million Italy (actually San Marino which is an enclave within Italy) is actually at the top. Luxembourg is still really high on the list but it's probably because their population is so small a few deaths (15) can really warp the stats, but civilized places like Sweden, Denmark and Austria are still much higher on the list than the US.
I wish it would show me "new cases / million" or something to maybe gauge which is growing faster, but it doesn't. I still think all in all the US is going to be rising on that list.

You know what doesn't appear high on any of the lists except total cases? China is below the world averge (which also handily appears on the chart) in both deaths and cases per million. I think that's plausible, they stamped down on the situation in a manner only a totalitarian regime can. However one of the more widely espoused conspiracy theories I've seen going arond is that China doesn't have the situation as under control as they say. In my posts about the stats a number of people (again, the conservatives, what's with them?), posted "yeah well I think China just isn't reporting cases anymore"
Personally I don't believe that but in looking at the graphs for different countries I do think Iran is either not reporting cases or not detecting them because their deaths are disproportionate to their cases compared to everywhere else.

But anyway TL;DR, I think things are gonna get really bad in the US.