Currently active cases in Australia: 665. Currently active cornoavirus cases in this (Victoria) state: 645 (which I believe are almost entirely in the city of Melbourne). That's according to this site, though the worldometer site I've been using actually lists 903 current cases, up from 380 in mid June. Most recent 24 hour period lists 107 cases, though thats a weekend day and weekend days are always underreported -- previous weekday was 254, a rate not seen since April. 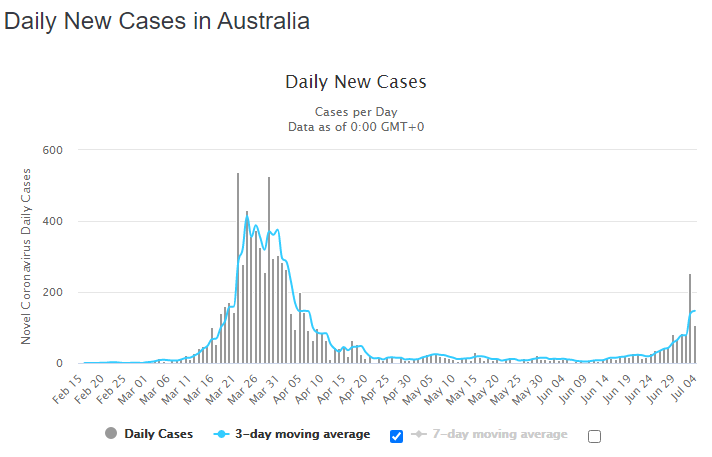 I'm not actually very well plugged in to Australian news but I gather the quarantine hotels for people returning from overseas or diagnosed with non-hospitalizing covidia have turned out to be a total scandal -- totally lax enforcement of quarantine, security guards and staff mingling with quarantinees and then going out into the world themselves. At present the statewide state of quarantine remains paused at a mostly-open level, I think the most visible remaining state of non-normal is the bars and nightclubs are still closed. Gatherings of over 10 or having more than 5 out-of-household guests over are not allowed. Informally, people have gone from feeling like this was "over" to being very cautious again. Rather than clamp down on the whole state they're clamping down very heavily on specific Melbourne suburbs where outbreaks are happening. I believe these post-codes are back to "only go out for necessary reasons," but 9 public housing towers are on total lockdown, their residents cannot leave for any reason. The government is providing them food and necessities, they're rent is waived and they're getting a payment from the government. Police and possibly military are enforcing the heavy lockdown. Of course some people are whining about "government oppression" but I think the government needs to do what it can to knock this down and these measures have nothing to do with any wild police state conspiracies.

cazzicles comment to this entry which clarifies some things (which I've already changed in the above paragraph) and adds a bit of context about the public housing towers.

I probably need to deliver honey to some places in Melbourne this week. I think one can't even travel through some of these suburbs so I'm going to have to examine a map. Also, it's fortunate that the masks mom mailed me, after taking nearly two months, finally arrived. 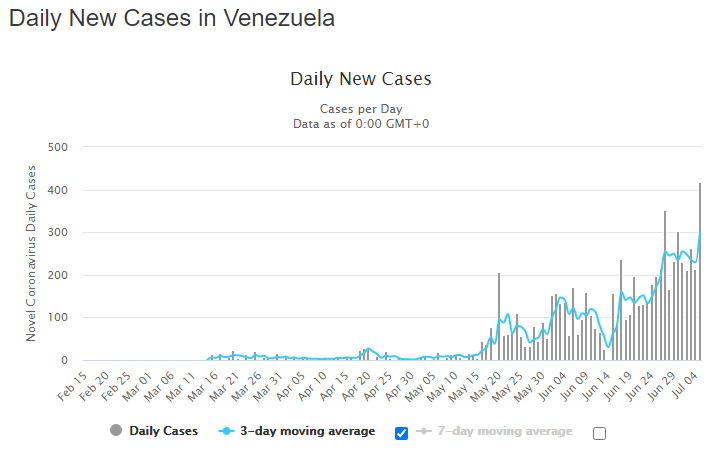 As you can see from the above graph, Venezuela didn't actually have very many coronavirus patients back when the height of the first wave was hitting everywhere else, but now it's on its first big wave. Everyone in Venezuela quarantined back when the rest of the world did, but it seems to be that people get tired of quarantining after about 40 days -- and they've started to come out and act like its "over" there too. I'm really afraid it's going to hit Venezuela extremely hard. ):
Eery day I've asked Cristina if they had any corona patients at her hospital. They haven't until last week, but now they do, and they've had their first coronavirus death. She has the usual nose-mouth covering mask but not the higher degree of protective gear you see in hospitals in more developed countries. She thinks she can buy a face-shield though, so I sent her money for that and hope she is able to do so. 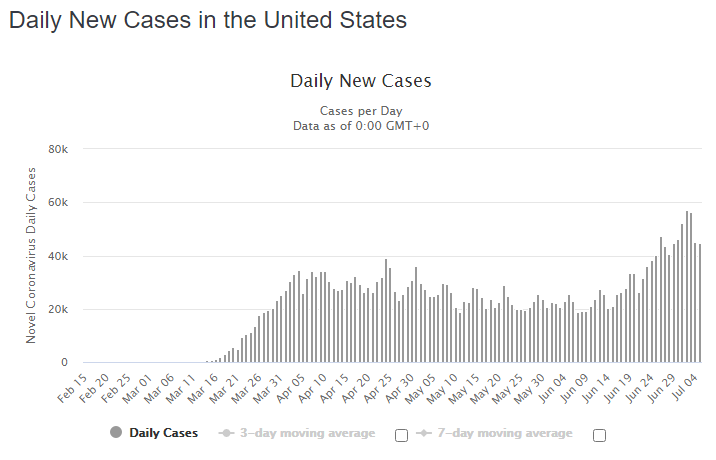 again, the past two days are both weekend, when things are always underreported, in this case making it look like the US is down from a peak when it probably is not. Perhaps i'll update these graphs when Monday data comes out.

And you're probably familiar with the US situation but for posterity this is the current situation in the US. I need hardly point out that this is very bad, and I think it nearly entirely hangs on Trump's head. Reasonable leadership from the top could have reduced mask-resistance to just a few wingnuts, and led to coordinated state responses and well prepared medical services. As it is, America is now clearly doing just about the worst in the world, worse than many 3rd world countries, and not only Europe but Canada and Mexico have closed their borders to the US. He said the world was laughing at us, he made that literally true when the UN laughed at him; he said he wanted to prevent Mexicans from entering the US, and now Mexico has closed the border to keep Americans out of Mexico. Making America Great Again indeed. 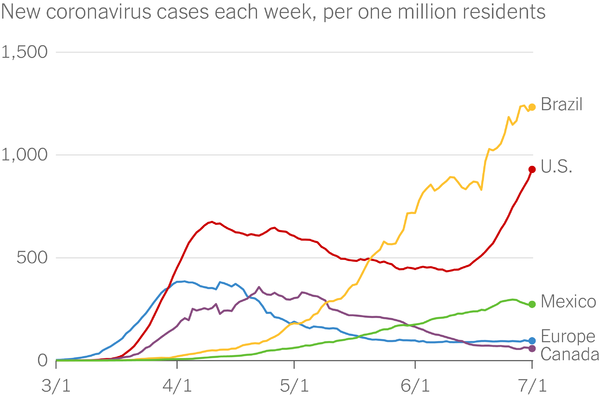