Some Good and Bad Travel Writing (or vice versa)

This past weekend I once again took the six hour train trip to Eastern Victoria, this time for my friend Billie's 30th birthday party. That was fun but I came here to write book reviews. In fact, on my return trip she gave me back all the books I had loaned her to read, having read them, so I returned like a mobile library with six books in my knapsack (4 returned books, the book I brought to read, and a book she has loaned me to read).


Geldof in Africa
I had picked up this book somewhere since someone's collected travel writings about Africa sounded imminently interesting to me. I'm not terribly enjoying it but muddling through. And trying to put my finger on exactly what I'm not enjoying about it, since it has many characteristics of good writing, such as nice turns of phrase, good descriptions, thematic structure. Some (other) writing fills me with a fear I can't possibly write as well as what I'm reading, reading this fills me with the fear that my writing might be as uninspiring as this.
I think a major problem is that it's a collection of short pieces ranging from a few paragraphs to a few pages and as far as I can tell zero effort has been made to tie it all together. I often wonder if there is any rhyme or reason to the order. Is it chronological? It's not organized by country because it bounces back and forth. Is there some thematic order I haven't yet grasped?
Another problem for me I suppose is right from the get go it's written from the perspective that you already know and admire Bob Geldof, know what he's famous for, why he's in Africa, and apparently are familiar with mundane details of the London underground. Since I had never heard of Bob Geldof, this came across rather wankerish to me. There's a picture on the cover of him staring off into the distance... wankerishly. I mentioned this Geldof to someone and they said "oh he did Live Aid," which I suppose is admirable. I googled him and wikipedia said he was the lead singer of a rock band I'd never heard of that was popular at the height of the punk rock movement. Having been rather a punk myself I thought maybe this might earn my respect and pulled up some of his band's top hits on youtube ... and it in no way conformed to what I think of as punk rock, was rather sickly sweet crooning like cats in heat with bubblegum for brains. So no, knowing something about him didn't increase my esteem at all.
The theme for most of the pieces seems to be how dangerous, sad, and unfortunate life in Africa is. Granted he was traipsing about thirty years before I was and I have no doubt there were terrible things afoot, I feel like surely this could have been balanced by some less dire glimpses at African life. As it is, even though he never says anything that could be construed as racist against Africans, the collective impression I feel like would fuel racist views that the continent is on a whole just a giant "shit-hole." He generally blames all their ills on European/American involvement and generally derides all aid and charity work by anything other than liveaid* (which he doesn't actually really mention). I too would say yes most Western governments have been terrible to Africa and a lot of aid work can be looked at pretty cynically, but the unsaid implication that he alone sees through all this is kind of wankery.
When he's not talking about what a shit-hole it is or heaping shit on other charities he's sharing out of context little snippits about what a badass he is chillin with Somali warlords.
So yeah, in conclusion, I guess he made his money with his music/television career / tax dodging in Mauritania, I suppose he wasn't trying to win fame or money through writing a best seller here, he just thought he'd publish a mish mash of stuff he had written so good for him I guess. But literarily speaking it fills me with existential dread that I might come off like him.

*and it's worth noting that Live Aid raised funds for the Ethiopian famine and gave those funds to the Ethiopian Derg government that was causing the famine ... well a small amount was siphoned off to buy weapons for the TPLF fighting the Derg (as thoroughly explained in my recent podcast!). Charities make occasional mistakes, I understand that, which is why it's worth evaluating their activities cynically while keeping in mind that they do mean well. But this kind of downright stupid lack of understanding of the context of the problem is exactly the kind of thing he spends much of the book sarcastically deriding every other charity for so it all seems a bit rich. 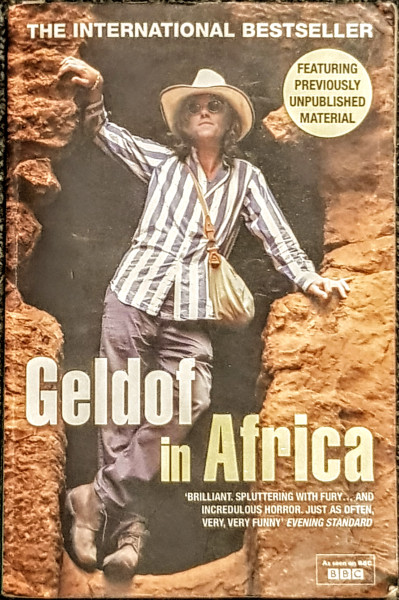 Patrick Leigh Fermor - A Time of Gifts & Between the Woods and the Water
My current writing teacher put me on to Patrick Leigh Fermor, who was "Britain's greatest living travel writer during his lifetime" and I had never heard of him either. I'm clearly not very plugged in to post-15th-century English culture. As wikipedia goes on to say, he's like "a cross between Indiana Jones, James Bond, and Graham Greene." And indeed, he appears as a character in the 1957 film Ill Met by Moonlight not as a travel writer but the war hero he also is (he organized and successfully executed a mission to kidnap a German general in Crete in WWII).
The two books of his I recently read are two parts of a journey he took in 1934 on foot through Europe from Holland to Constantinople. He wrote about it decades later from his journals, so the writing looks at the journey through the retrospective lens of the coming calamity of WWII. The rising nazism of Germany and fascist movement in Austria contrast with the kindness of strangers and bucolic scenes of every day life. His descriptions are poetic, precise, and full of awareness of the context of the moment in time. Traditional dress and culture in Eastern Europe is recited with a detailed intimacy simultaneous to a wistful nostalgia knowing it would all be seen wiped away by war.
I gather his family was somewhat well-to-do, his father was a Sir So and So Fermor, distinguished geologist, and his mother was "daughter of [someone apparently worth naming in a wiki article]," and his original intention was to live like a hobo during his journey, but he somewhat accidentally befriends a German or Austrian count living in a castle at some point relatively early in the journey, who sends him off with a letter of introduction to the lord of the next castle over, who does the same, so he ends up spending most of the journey staying in castles being hosted by grafs and margraves. This could come off wankerish if it weren't for the fact that he remains humble, often mentioning its not how he expected to be traveling, feeling a mild guilt for not traveling in the style he had intended to (and one really can't blame him for taking the opportunity), and he does absolutely insist on adhering to his intention not to travel by car or train except in extraordinary circumstances. He mostly goes from castle to castle by foot even with rides in cars proffered, though he's not against riding in barges or by horse.
Sadly he died before he finished the third and final installment of the journey. It was published posthumously from the draft manuscript but I couldn't get my hands on that. Indeed, this "greatest British travel writer" seems to only have three works available on Audible (which is by far usually the easiest way for me to access works).
But anyway, in conclusion, in complete contrast to Geldof this was some really good inspiring and enjoyable-to-read travel writing. I hope I can find more of his writing.
By an amusing coincidence I mentioned this book to my mom and she was like "oh dad and Maria [my sister-in-law] were just talking about that book." Yes, it turns out, and I'm pretty sure I hadn't put them onto it, they happened to also be reading this book published in 1977 & 1981 at the same time as me. What a funny coincidence! We're an accidental book club!


And speaking of travel I recently discovered this song I really like, called "The Wandering Song," purely as a poem I think I would like the lyrics and you should listen to them. But also it's a good song:

In other other news, another important milestone to mark, yesterday the first covid vaccination shots in the United States began. Also the Electoral College finally met, and important figures in American politics like Vladimir Putin recognized Biden's win, but Trump still has not. Not sure how long he can hold out without big daddy Vlad's support though, even Moscow Mitch changed his tune on Vladimir's cue.