As is tradition let us begin with the map of where I've traveled in the past year:

Though this would seem to imply I've been to the Melbourne airport, which, I have not, but you have to input at least one airport code to make it make a map. 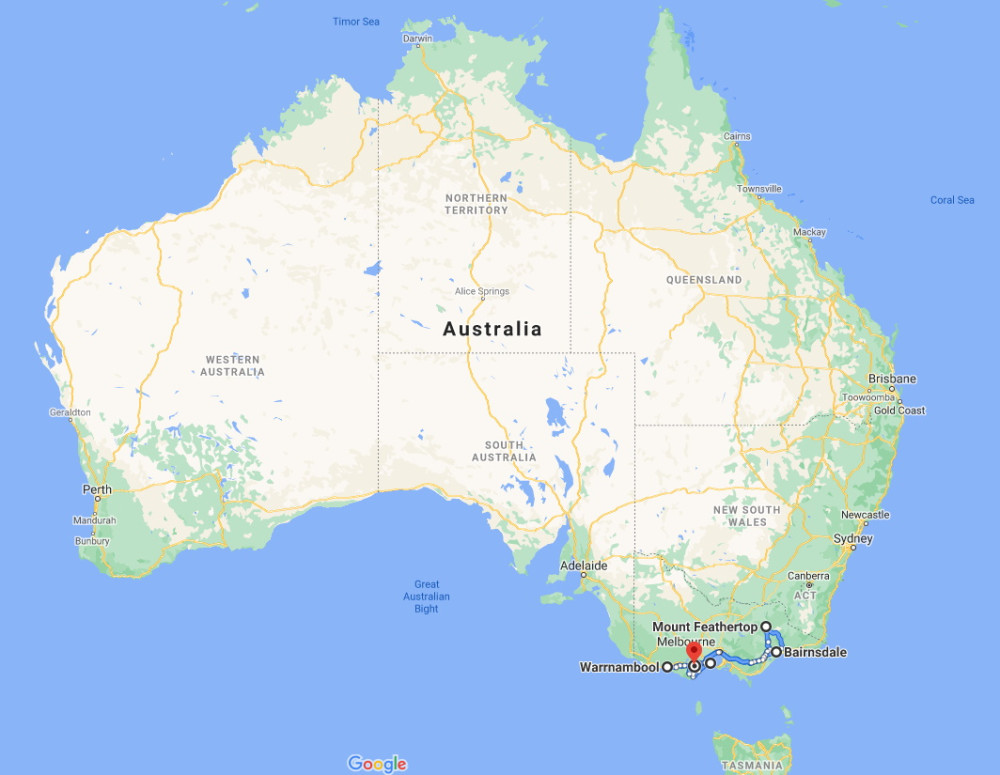 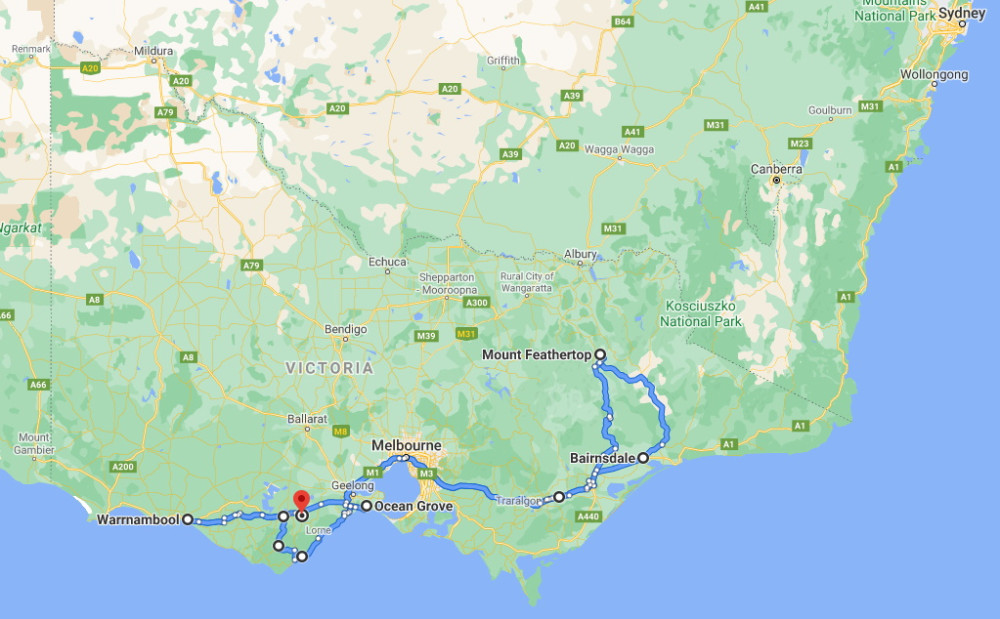 In fact I never left the state (indeed for much of the year we legally could not. Counting just these furthest trips this year I traveled 969 miles, which compares to my mileage and my comment about my mileage last year: "23,695 miles this year, a fraction of any previous year since 2012."


Anyway, so, this year! I'm pretty sure this will be a year we'll all remember for the rest of our lives. [Interruption for the celebration of new years. Okay all writing after this is in 2021!]

Cases in this state

In February my parents made their annual visit. One of dad's friends happened to be on an around-the-world cruise that happened to be stopping in to Melbourne while they were here so we met up with them and went on a walking tour of Melbourne. Needless to say, their cruise never made it around the world (they were actually left wandering the sea for awhile with nowhere willing to allow a cruise ship to dock, which was a bit silly since having been at sea for over two weeks it clearly wasn't aboard) 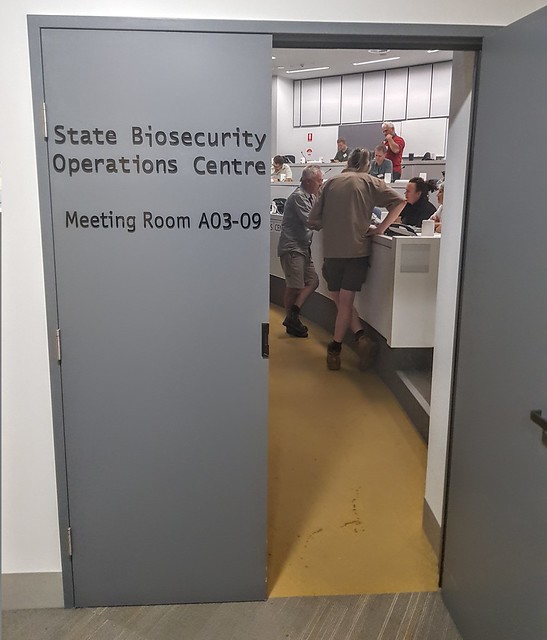 March: by the beginning of March the pandemic was definitely on our radar but we had nooo ideaa what we were in for. On March 5th I booked the flights for Cristina and I to fly to the Bahamas to get married April 20th... woo yeah woo! .... that was $3,000 I may as well have flushed down the toilet as the airlines refused to refund any of it, though United agreed to give us the equivalent maount in credit that will expire after a year. I'll definitely start harassing them again to at the very very very least get an extension on it's usability.
Anyway things quickly exploded from for example 28 new cases on March 12th to 537 on March 22nd (the height of the first wave it turned out), and the state went into lockdown on March 25th. What we initially thought was going to be a two or three week lockdown turned out to be a 112 day lockdown. In what became known as the "ring of steel" Melbourne residents couldn't leave Melbourne except for work, and the state borders were also locked for all but a small handful of very narrowly defined reasons. During the height of the lockdown one could only leave the house to work an essential job or go on one grocery shopping run a week (I think?) and an hour a day of exercise within 5km of their house. This didn't effect my day to day much at all really.

On March 30th the beloved tallship Pilgrim sank at her dock, which was heartbreaking for those of us who have spent countless hours aboard her. 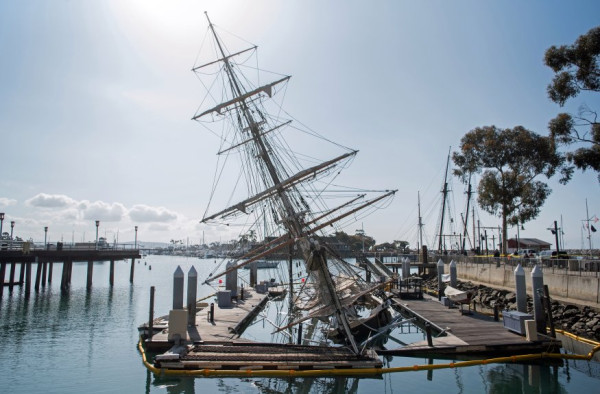 April I started to notice it was severely impacting my sales, cutting my income to a meagre trickle, and unlike all my neighbors I don't have the support of the numerous Australian programs that supported people with lost income. Also coronavirus was hitting Venezuela and Cristina and her coworkers had no PPE, leaving them feeling doomed like little coloured chickens, and it was freaking me out.
And again, Cristina and I had been going to get married on April 20th. I then could have added her to my existing visa, she could hae joined me within months, and been no my Permanent Residency visa application. Instead I need to wait till the PR hopefully gets approved and then start a separate $13,000 14 month visa to get her here, so not being able to get married in April _really_ set us back.

June after about two months of low double digits of monthly cases it felt like we had this Covid thing mostly behind us and lockdowns were starting to ease up. My friend even had a party and all got together! Not like huge bumpin 30 person party but there were like a dozen of us. In one indoor location! Meanwhile in the states Trump was encouraging ominous displays of police force against protestors. It's funny I suppose for many of you reading this that was summer but for me that was mid winter and literal dark days. My memory of this whole period is of one continuous night actually. 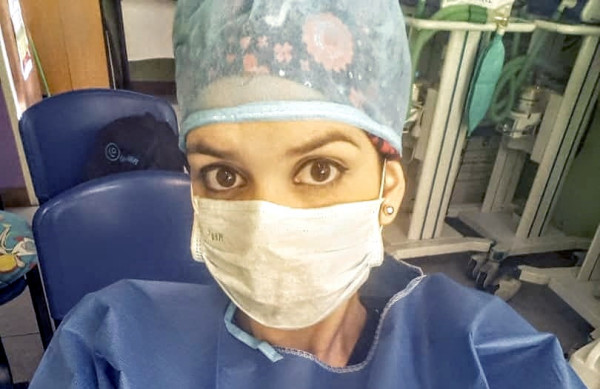 July - On July 3rd my grandfather Roger collapsed and died, he was 93. He's fortunate I suppose, there was no lingering away in a hospital, he was up on his feet, had just gone to the hardware store, and then he suffered heart failure. I never posted about it earlier because how do you begin to do justice to an amazing man who lived such a multifaceted remarkable life? Also I hate it when people say "I'm sorry for your loss" to me. I do feel like I should make a post about him though. Obviously I was unable to travel to his funeral, which I would have under normal circumstances, but then again, no one was able to. There was a nice ceremony in August via zoom attended by dozens of people recalling how he had impacted their lives. Later later in October there was an "inurnment" in which his ashed were placed in the grave beside his wife my grandmother, which hadn't been intended to be a ceremony but a dozen plus people ended up attending, and as well since he was a veteran the military sent a bugler to play taps.
In July the "second wave" hit us here, this time it was almost exclusively in Melbourne. It apparently had somehow gotten out from the quarantine hotels. There was a pervasive rumor, apparently started by a tabloid making up a story whole cloth, that it was because a security guard had had relations with a quarantinee, but I believe that turned out to be baseless. On July 21st, masks began appearing around here. Which is amazingly late in the game looking back on it. On that date there were 359 new cases in the state and rising vast, and I estimated about 1 in 8 people out on sidewalks was wearing a mask and about 40-60% of the people in the grocery store. Also around this time Cristina and I succeeded in getting her PPE.

In August having successfully figured out how to get money to Cristina and source PPE there I decided to start a gofundme for her coworkers, which raised $2080 in 48 hours! Also some time around here I discovered that a group of volunteers here in the little village of Birregurra get together every Tuesday to do landcare around the township, weeding, planting native plants, cutting out blackberry brambles, etc. I found this very enjoyable and a way to be more involved with the community.

In September I signed up for classes at two community colleges in California, since everything is offered remotely now! So that was the one up side to this year. I took two biology classes and a writing class, finishing with a 98% average. (: Also in September I was increasingly panicked since my 457 visa was due to run out Oct 4th and I had to chase down a lot of paperwork from my boss and jump through some other hoops (it looked for awhile like I'd have trouble proving I speak English but that turned out to be unnecessary in the end).

November I took the train out East (the Easternmost route on the above map) to go hiking with my friend Billie, whom I hadn't caught up with in over a year. Most people I met out there in Eastern Victoria were excitedly hoping for a Trump win in the election that was then days away. Yikes. And then there was the election! 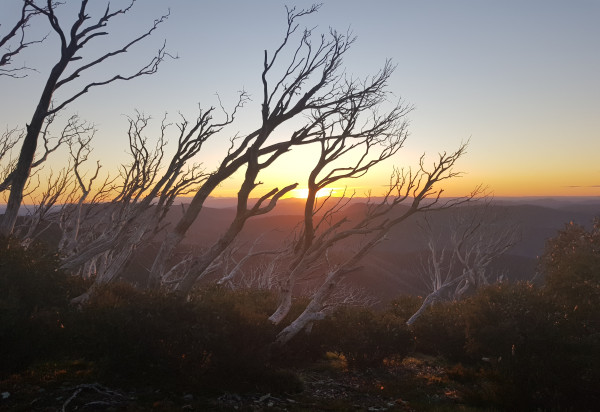 December a beekeeping friend invited me to their family's place in Warnambool for Christmas dinner, thus making the westernmost extremity of my travels for the year. In the United States and Great Britain people began to receive vaccination shots for covid which is exciting. Here in Australia a new outbreak began in Sydney mid month (20-30 cases a day since then), and, after 60 days with not a single new locally acquired case here in Victoria we had 3 locally-acquired-from-unknown-source cases yesterday and six today. With undetermined local cases and people generally thinking its over and attending multi-hundred-persno NYE parties tonight, I fear we may be in for a third wave.

Tonight as I mentioned, I was working on this very entry when I took a break to videocall Cristina to ring in the new year with her. After midnight I went outside to see if anyone was firing fireworks or anything, but things seemed pretty low key here. The moon was bright like a floodlight, and when I looked up at it whispy clouds were scudding past in front of it ... but they were going the opposite direction they usually do. I've only ever seen the wind blow west-to-east here. To see clouds flitting east-to-west across the moon felt downright eerie. I hope this isn't some kind of omen for the year. 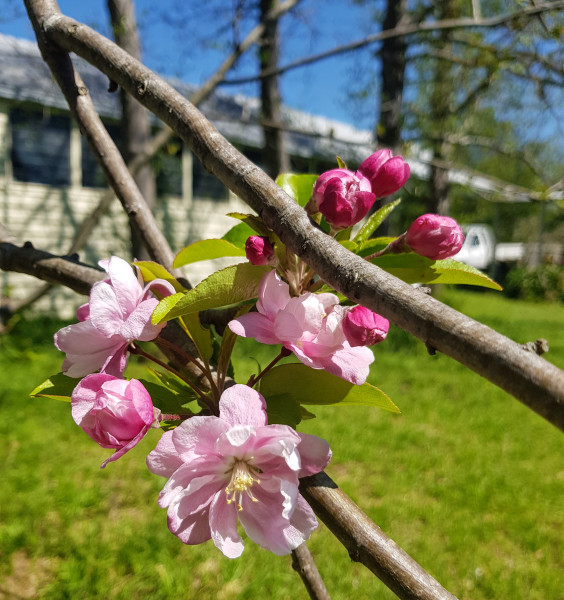 All in all 83.7 million people worldwide have been diagnosed with coronavirus this year, and 1,824,053 people have confirmably died of it. This is almost the population of Latvia, and certainly greater if one ccould include undiagnosed deaths. There are about 30 countries with populations smaller than the 2020 death toll from coronavirus.


Plans for 2021
They don't expect to open up international travel for the year so probably no traveling. If at all possible I very badly want to see Cristina as one could imagine but it's not looking likely. I tihnk my PR should be approved sometime between April and July, which will be a huge relief and make life easier. Other than that it's hard to make plans in this uncertain world!