Pako Pantry, Not Quite A Restaurant Review

The weekend before last Trent asked if anyone wanted to go for breakfast at this place called Pako Pantry off Pakingham Street in Geelong Town. Pakingham Street is the kind of hipstery part of Geelong so I predicted everything would be "desconstructed," but I do love a good breakfast so I put my hand up to join. For most of our friends 9am Sunday morning may as well be the middle of the night but this fellow Alex joined as well.
I was initially going to order the "chai spiced french toast" but I noticed it came with ice cream. Invariably french toast or pancakes seem to come with ice cream here, I like ice cream as much as the next person but not for breakfast. Sure one could ask them to leave it off but I know if the portion sizes were calculated to involve a big scoop of ice cream they won't compensate with something else for its lack so I may as well order something else to get my money's worth. So I ordered this "shakshouka" which turned out to be very much like the Turkish dish I know of menamen which I quite love, basically poached eggs in a stewy bowl of tomatoes and onions and such. Trent ordered a hot chocolate with his wrap thing, which came "deconstructed."
Trent mentioned he usually goes to this place on Wednesday morninings. 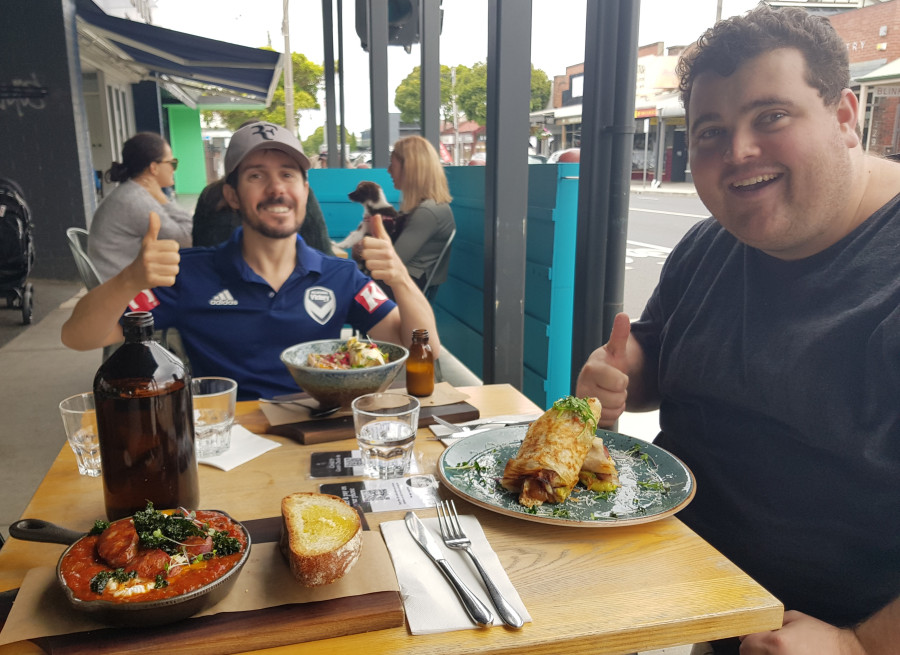 This past Sunday he again proposed we go there, this time at noon and more of our friends joined. After a waitress seated us I looked at Trent mischieviously and asked "is it her??"
He laughed noncommittally and avoided answering. "What?" asked Alex.
"Oh if Trent starts going somewhere every week it is inevitably because he has a crush on a waitress." Again he laughed and neither confirmed nor denied.
This time I ordered "pork belly bao rolls," which for $36.23 consisted of three little taco-like morsels the size of mini street tacos. After eating them I was still fully ravenous and proceeded to eat a side of bacon, and then, after everyone else had slowed down, I ate Grant's plate of fries, Trent's plate of fries, Eli's bacon and her kielbasa sausage ("kransky"). Kristen gave me her "green fritters" of which she'd only eaten half and she claimed "they're better than they look," and actually she did this before I'd eaten all the other things and was still fully ravenous, but I must admit I wasn't quite ravenous enough to eat more of them after my one bite. 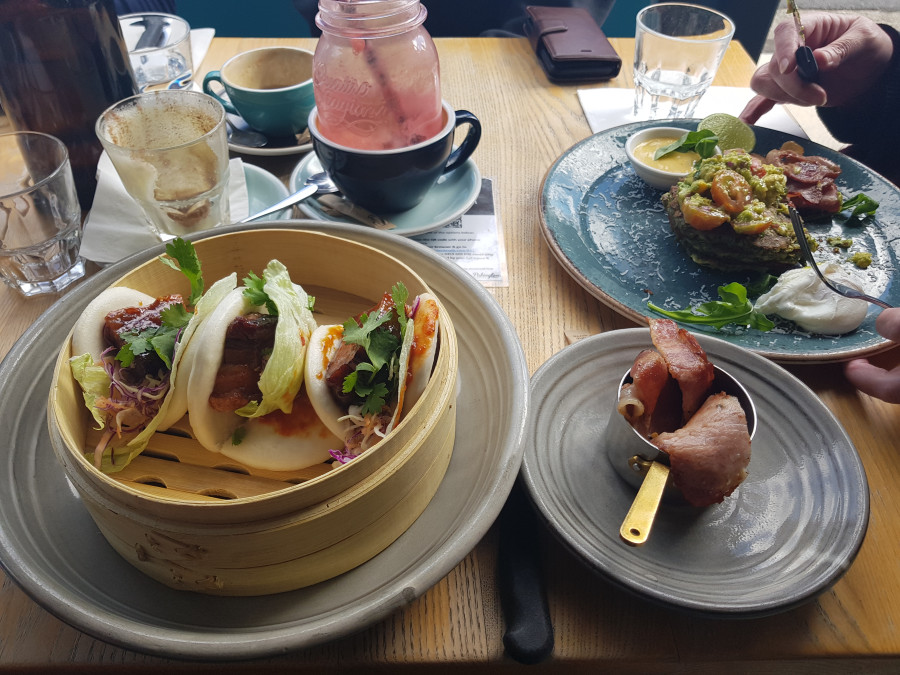 Okay I just double checked my pork bao dish was $21.50 and the remaining nearly-$15 was between the small side of bacon and tiny tumeric latte. I don't care how big a crush Trent has on the waitress I don't think this place gives one one's money's-worth.