Thanks for the feedback yesterday about the dream/history sequence. Onward!

Day 3 - Opening Ceremonies
February 15th, 2012 – More than a hundred of us are crowded into the local government headquarters for the project opening ceremonies, we sit in a horseshoe shape as, in the middle of the room, a local shaman is performing a traditional dance amidst the beating of a drum, and breathing fire. He holds a metal wand with a flame on the end, his lips are thickly coated with some black substance, his eyes roll around -- he brings the flaming wand to his lips, seems to inhale it, and expels a ball of fire to oohs and ahs. Presently he grabs a small boy, who seems to be there for this purpose but still seems a bit taken by surprise, and the shaman pantomimes cutting off his head with an axe. I wonder if at some distant time in the past this perhaps may not have been a pantomime. The performance finishes to applause, and as the shaman goes around the room people shove money into his hands. The person beside me elbows me and I quickly pull out some local naira notes as well, lest the shaman choose to put a curse upon me.
Following the shaman’s performance, proceedings are opened with first a christian prayer and then an muslim one. Nigeria is officially about evenly divided between these two religions. Next there are speeches. The local government chairman, a charismatic fellow, seems to be the star of the show. Fortunately I’m just another person in the crowd, it would have been very intimidating to be thrust into the spotlight amid the overwhelming culture shock I was experiencing. After the ceremonies break up I meet the people I will be working with: Yinka is an attractive woman in her mid thirties and runs the local non-profit development organization, known by the giant acronym PASRUDESS, which will be administering the project; and three young men in their early twenties who are volunteers with PASRUDESS: slightly geeky Hattrick in a polo shirt buttoned up too high (“not Patrick, but Hat-Trick, like in cricket”); Whale (Wah-lay) [I’m kind of thinking of intentionally misspelling his name phonetically as I don’t know about you but I can’t help but read “Whale” like the english word], in smart business casual attire, who seems effortlessly but a bit self consciously cool; and Dayo with the easy self composure of a jazz player.
After the ceremony we gather for photos on the front steps of the hall in various combinations of the people involved. The local government building is bleak bare unpainted concrete looking out on a dirt packed yard, in the middle of which a faded yellow construction grader sits with four enormous and very flat tires, weeds growing around it, a poignant monument to stalled development.
As everyone is dispersing I look for Mike and see him just getting off the phone, looking very disturbed. He approaches me and says
“There has been an incident with Doug’s team.” 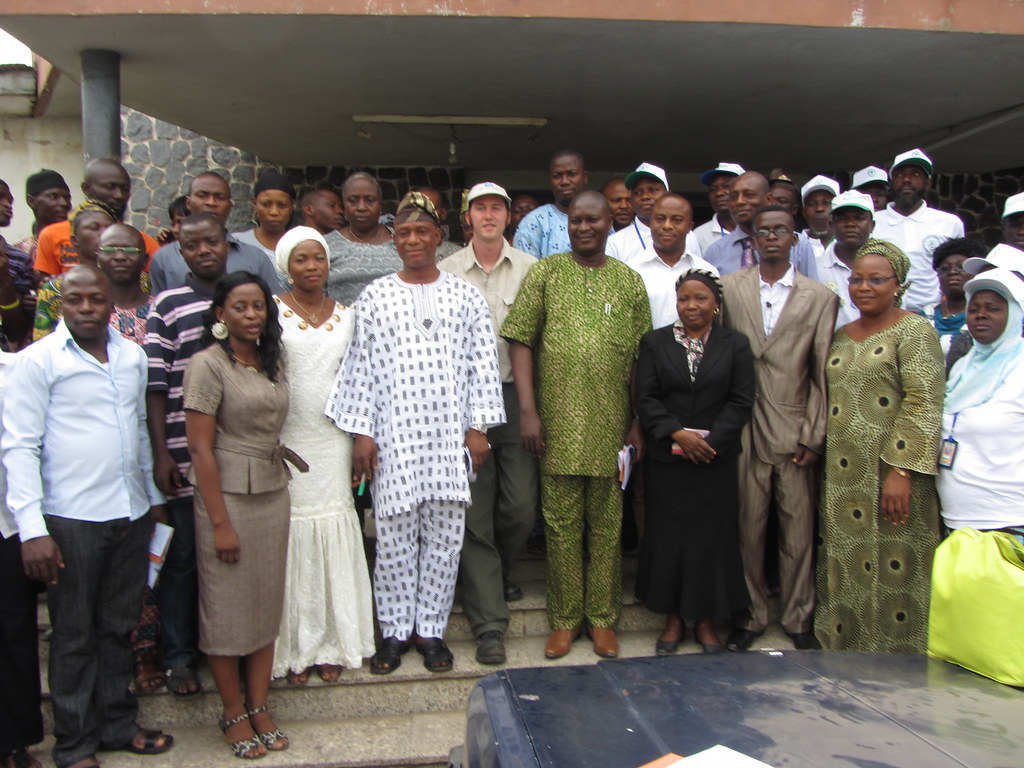 Earlier that morning 200 miles east in Kogi State – Doug nervously gripped the edge of the chair as Blessing wove the car through traffic and around the pedestrians. Suddenly there was a woman right in front of the car. There’s the screech of breaks, and a sickening thump thump as she bounces off the hood to lay on the road in front of them.
“Stay here!” John admonished Doug as he and Blessing leapt out of the car. Already a crowd was forming. The woman was conscious and not bleeding but she felt badly hurt. They took her to the hospital.
“Blessing has been arrested.” Mike explained to me solomnly, “we must take care of the woman’s medical care because if she dies he will be charged with murder.”

Personally, I feel like this could be better. The opening ceremonies feel exposition-y to me even though it's not exposition, it's a scene. I'm not sure what would put more pizzaz into it. Other issues, I can feel the ghosts of creative writing professors whispering in my ear that I should just amalgamate Hattrick, Dayo and Whale into one character, maybe I'll do that later. Whale would be easiest to do away with I guess since he doesn't even come up again. And I'd like to change their names around so they can't get on my back about "I didn't say that!" (I think I have some of them saying things the other actually said), but how do you replace a unique name like Hattrick?? Also as I try to integrate the dream history sequenceI think I might put it after this day so I can have the government chairman appear in the dream as the Bashorun (leader).

There was at one point a video recording of these open eremonies I think, but it was lost in a computer crash.