Continuing the posting of scenes from the memoir...

Day 7 - A Special Treat
Sunday, February 19th, 2012 – “We’ve got a special treat for you!” Hattrick tells me excitedly in the car as we roll through the thonging traffic of the city. “We’re going to make amala!”
“Oh cool, that sounds fun.” I’m always down for an interesting cultural adventure.
“You’ve had beef amala, and goat amala, and chicken amala…” he’s cheerfully counting off on his fingers
“Yes, that is true” I nod, wondering where he’s going with this.
“So to make it extra special we’re going to make FISH amala!” he exclaims.
“Fish amala?” I ask, trying not to sound terrified, “you, uh, can do that?”
“Of course!” he blithly answer.s. I look out the window apprehensively at the jumbled crowded city we’re weaving through. I happen to loathe fish, though I hadn’t mentioned it earlier since it didn’t seem likely to come up much in this inland town. Sure I could tell him now but it’s my inclination to persevere uncomplaining rather than make excuses.
We pull into the walled and guarded parking enclosure attached to an apartment building and Hattrick leads me up to the apartment Yinka apparently shares with her sisters. It’s cozy but not tiny. Hattrick, whom I’m beginning to gather is a nephew or cousin of Yinka’s, dons an amusingly colorful flower pattern apron in the kitchen and proceeds to show me the ingredients. Pungent plump little mackerel are quickly diced. A plant, “jute mallow” I’m told, is also diced up and added to the sauce.
“And now we use the broom” Hattrick announces
“THE BROOM?” I ask in alarm.
He chuckles and brandishes a kitchen whisk made of the same bristles brooms are often made of “we call this a broom.”
“Ah, okay!” I laugh, a bit relieved.
Finally, yam flour is rolled up to make the amala dough balls.
As the time to sit and eat our creation grows nearer my stomach is tight and my mouth is dry. We sit around the little table in the dining room and I smile gamely and dig in. I’m trying not to let on that I loathe the meal but I fear it’s becoming obvious that I’m making slow progress and drinking way more water than eating food. In a pinch I can eat a roasted salmon to be polite, and I hoped to pull off the same trick here, but mackerel is a very fishy fish, and the combination with the unfamiliar gelatinous texture of the amala is making my diaphragm involuntarily heave with every bite. After I come particularly close to losing my stomach contents I finally resolve that discretion is the better part of valor and it would be more polite to claim to be full, however suspicious that may leave them, than to puke all over the table. 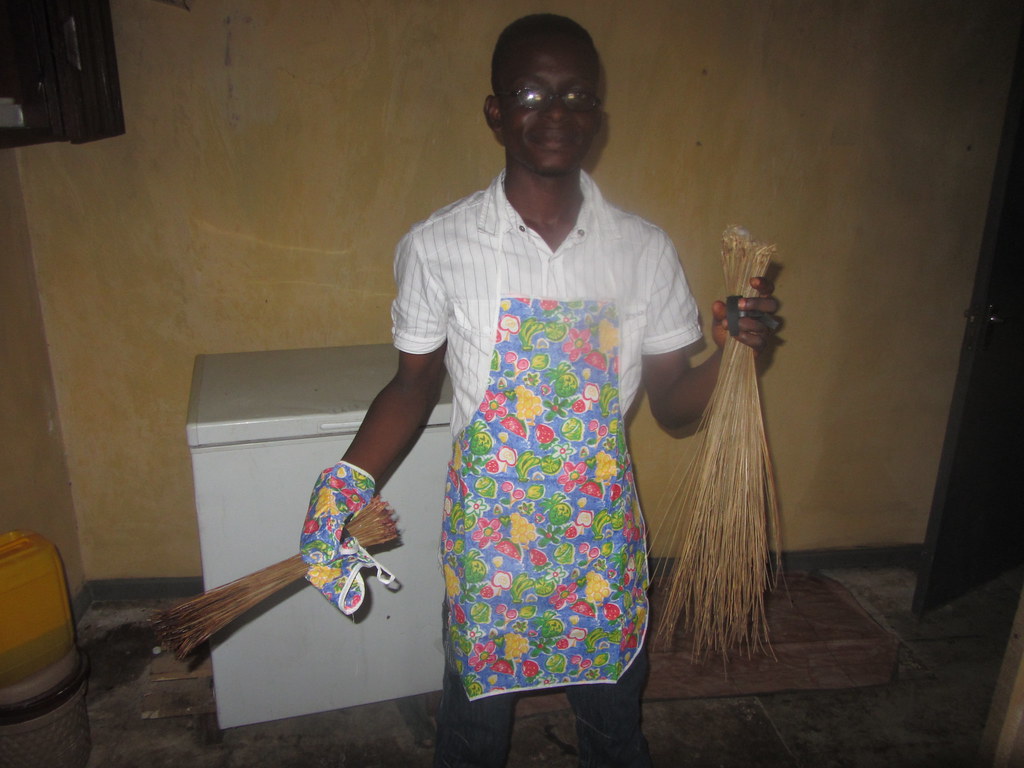 In the evening Hattrick, Whale and Hattrick’s sister take me to a “Western restaurant” where we are able to order pizza. The meal ends with them having only picked at their pieces and not finished very much.
“I think you don’t like pizza?” I joshingly jibe at Whale. He offers an embarrassed smile and says
“To tell you the truth I don’t really like foreign food.”
It makes me laugh to think of pizza as an exotic foreign food, but a hurt expression enters his eyes.
“Are you making jest of me?”
“No no no” I backpedal quickly trying to think how to smooth the offense, “I myself had never had amala before I came here can you imagine?”
He laughs and grants that that’s pretty funny to him.

Let us discuss the very first word here, "Sunday" -- I didn't include the day of the week on the earlier datelines but I was just thinking it might further contextualize the passage of time, and also perhaps hint at why this day we're doing special things and not training.
I only thoroughly blogged about things there for the first few days and didn't even catch up with myself before my second and third projects and thus never really wrote much about the latter half of this project so this is largely from memory unaided by contemporaneous blog posts. The pizza restaurant wasn't even the same day (I only know it's date from the time stamp on a photo) as the fish amala but I thought I'd group them thematically. But thought I might as well group them thematically. Also this day I'm pretty sure we went to the zoo but I don't think that really fits in and this is a god damn book not a blog ;D though about the zoo, since I never wrote about it, it was mostly sad -- I thought maybe I'd see some African animals but the San Diego zoo definitely ahs a better selection, and this one had sad looking chimps in small concrete cells that looked like jail cells and still make me sad to rememember.