Continuing the posting of scenes from the memoir. This is page 19 of 21 currently written pages of chapter II so we're getting towards the end of what is currently written... though it's the weekend and I hope to finish the chapter over the weekend, hopefully!

Day 10 - Waxing Eloquent
February 22nd, 2012 – “Now back home I have a specially made wax melter to melt wax and can order candle molds, but we’ll have to improvise. I have this manual another development organization put together which describes how you can put beeswax in a sack and submerge it in boiling water to render the wax….” I explain the method described while my audience listens politely.
“Otunba, ….” one of the trainees addresses me once I’ve finished. He is older, his goatie frayed in grey, deep creases etched in his cheeks where wrinkles form from smiling. He is speaking Yoruba of course so I have to await Dayo’s translation
“He says 'otunba, we have a better way to do this, let us show you.'” I enthusiastically agree, and the group sets about getting the necessary equipment and setting up just outside our metal awning. Some cauldron-like pots are somehow immediately produced and a campfire style fire of logs is soon burning. A cauldron full of water is set on some cinderblocks to be just above the fire and presently the water inside is at a boil. Chunks of wax are then tossed in, and it’s all stirred with a stick as the wax slowly melts. Presently the whole thing is soupy with what looks like bean casings floating on the surface. One doesn’t think of bees as making cocoons, but they do -- they’re just never seen because they’re embedded within the wax comb but they are separated out during the wax rendering process to become what’s called “slumgum.”
Once everything in the cauldron that’s going to melt is melted, the contents are carefully poured through a mesh of mosquito netting into another large pot, which separates the slumgum and other debris. From this second pot it’s carefully poured into bowls. Wax being lighter than water we just pour carefully off the top and stop when it appears we’ve poured off all the water. Because the wax will naturally separate from water there’s no real harm in accidentally pouring water in with the wax. We’ve coated the inside of the bowls with soap so if the wax cools and hardens in the bowl we’ll be able to remove it. Some we allow to do this to make wax cakes useful for longterm storage or trading. Some of the wax we put into another pot to make a lotion out of. This is a very simple matter of combining the beeswax with shea butter and the pulpy insides of aloe vera leaves. Another thing we want to do was make candles, but we need a suitable mold.
The participants and I scrounge around for anything we think might work as a candle mold. I had high hopes for a piece of PVC pipe but once the candle had hardened within it it couldn’t be cracked open without breaking the candle, and the pre-cracked pipe leakes too much. Two long fluorescent light tubes were filled and then shattered to make candles, which was effective though obviously not repeatable and wasteful of resources (though I assume they were already broken), but the two giant candles thus formed are enthusiastically dubbed the “otunba candles” by the class.
And then we had a true candle-making breakthrough. The papaya plant it turns out consists of a woody trunk a bit taller than a person (the one’s I recall seeing anyway, though I read they can get up to 5 meters / 15 feet) from which green hollow branches emerge. These branches are about the width of a finger and can be cut to a length of about two finger lengths as desired for candles. Because the melted wax will leak out the bottom we firmly plant the bottoms of our molds in the sandy soil, and fill them with wax, with a wick of string suspended down the middle. Being plentiful, once we found it worked we could have as many of these molds in use at a time as we could desire. Once the candle had cooled, the papaya stalk is easily peeled off the finished candle.
All this was more or less a fun novelty as candles don’t sell well in Africa, people do have electric lights and better things to spend their money on than candles, but everyone enjoyed the project anyway. 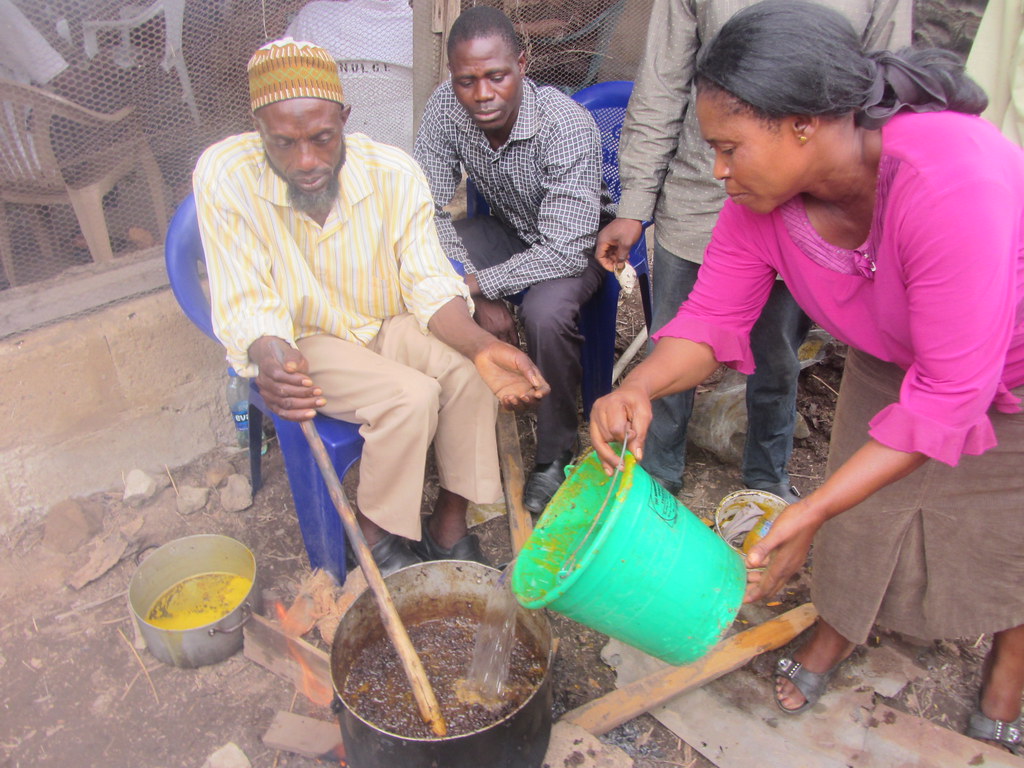 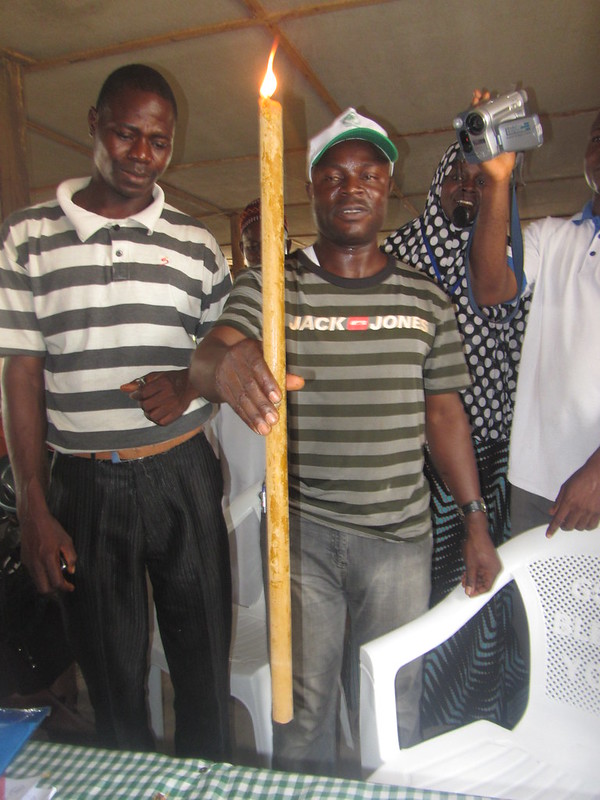 It's after midnight and regretfully I'm too tired to make substantial changes at this time but I'm thinking this might draw the reader along more if I emphasize more at the beginning a sense of not knowing how to make candles in these conditions. In general I particularly like this section because it illustrates how they sometimes had better ideas than me. In a recent writing workshop thing I participated in (organized through a Melbourne writing Meetup group) two or so of the appx ten-ish participants, after reading the first chapter, were like "this sounds like it's going to be a white saviour thing" or something along those lines, and I want to steer well clear of that by emphasizing that I don't pretend to have all the answers or best ways of doing things and that I often learned valuable things from them.