Today I substantially reworkeed the dream/flashback sections, and I'm very happy with it. I diced it up so instead of one block of it it's spread out. Recall it was my goal to integrate and parallel the historical bits with the real life bits and I feel that went very well. For example after the section where I arrive at Ibadan I inserted a longer bit of Yoruba warriors arriving in Ibadan, which leaves off as they're just about to attend a big meeting, which brings us up to the part with the real life opening ceremonies, and after the section I titled "the Chairman's throne" in which I was in the real life local government chairman's office there's a scene in the king's throne room.
Didn't make much progress expanding the end of it, meaning the below is the last currently completed section, but I think I accomplished the hard part of puzzling out how I'm going to tackle the next few scenes I have in mind so I'm optimistic I can keep up with myself through the end of the Nigeria chapter.

Day 12 - Closing Ceremonies
February 24th, 2012 – The closing ceremonies are a bit like the opening ceremonies, with the notable difference that while I was an invisible nonperson at opening ceremonies, I have been transformed over the past two weeks into someone who gets to sit at the head dais. I’m also now wearing some elegant flowing robes in a traditional local style that had been specially made and gifted to me that morning. There’s a speech by the state minister of agriculture and local government chairman, and one by one the participants have their names called out and come up to receive a signed certificate and shake hands with those of us up at the dais.
And then I’m being asked to come stand in the front of the room again and I’m not quite sure why. It’s a good thing I don’t get stage fright because I’m the center of attention of well over a hundred people and have no idea what’s going on. About half a dozen dignified elderly men and women are also coming up and gathering around me.
Finally Dr Bello, one of the prominent organizers, explains to me that this is the local counsel of traditional elders and they are going to bestow the title of chief on me. A sprig of neem leaves is placed under my traditional hat on my head, and the elders begin chanting. In my memory there were swirls of smoke around me, I don’t know if incents were being burned, it was from the otunba candles which definitely had been lit, or my brain was just overloading.
“We are bestowing upon you the title of ‘Soyindaro’” Dr Bello announces with a grin, “it means ‘maker of honey into wealth,’” A necklace of large orange clay beads is placed over my head and matching bracelet placed on my wrist. “And we are bestowing upon you the Yoruba name of “Oyoyemi Omawale,’ which means ‘our son has returned.’” Everyone applauds. I grin and shake Dr Bello’s hand, and thank everyone who comes near me, it’s all a bit overwhelming.
After we’ve said goodbye to everyone, in addition to everything else, Dr Bello gifts me with a bag of yam flour which must weigh thirty pounds The daily flight out of Ibadan is sold out, so I’m driven four hours south to Lagos to fly to Abuja from there.

“Do you have a gift for me?” the grey haired airport employee says laughingly with a sly wink as I approach the outer doors to enter. In response I laugh like that was a funny joke.
He stands to block my path and says just a little more forcibly “come on surely you have a present for me?”
I force a smile and insincerely apologize that I do not. I’m just beginning to wonder how to break this impasse when he notices my orange beads.
“Are you a chief?”
“Yes”
“Where?”
I give him the details and he switches to respectful tones as he invites me to enter the terminal.

“What’s in the bag?” asks the security man in the airport, standing swaggeringly in military camo in the corridor.
“Uh, my luggage?” I venture.
“I need to inspect it, open it up” This isn’t even an official security checkpoint, but I’d made the mistake of looking uncertain about what direction to go and this guard saw his opportunity to lord it over an oyinbo.
“Right here?” I don’t terribly want to unpack my luggage in the middle of a busy airport corridor.
“Yes” he snaps preemptorily, but follows it with “wait, are you a chief?”
“Yes”
“Where?”
I explain, and he welcomes me to immediately continue my journey, pointing the direction I need to go.
The flight, like a bus, waits an hour until enough tickets are sold before taking off. The short flight has meal service and generally compares entirely favorably to domestic flights in the United States, though the fact that that same flight crashed a few weeks later into the “Mountain of Fire” church with the loss of all aboard somewhat makes me shudder in recollection, as it’s as close as I’d ever like to get to an air disaster. 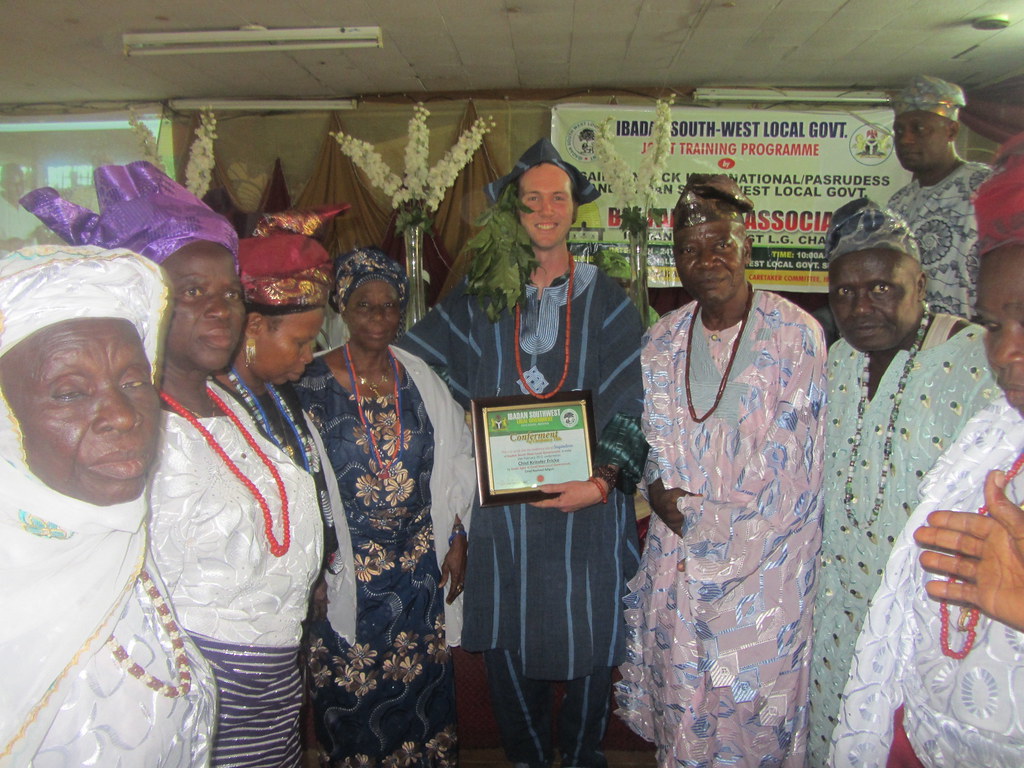 I realize I mention the mountain of fire crash on the flight in as well, I haven't quite decided where to put it. I think it fits better with the flight in to Ibadan, a stage in which thematically "everything is scary" -- but in actual fact this is the flight (Lagos to Abuja) that crashed a month later, not the Abuja to Ibadan one. So it's a choice of what fits better narratively or what is actually correct.