Okay this is definitely very first draft... in fact I literally just wrote it! and a voice in my head is definitely urging me not to post it until I've maybe had a few days to brew it up, but rather a purpose of setting out to post a bit every day was to compel myself to just get things written so here it is so I can see if I can try to continue moving forward tomorrow. And this could be divided into two scenes to be posted seperately, which would give me more time to work on the second part but I think they belong together.

Days 13-14 - Back in Abuja
February 25th, 2012 – “Hi Thomas, how’s it going?” I ask the hotel doorman as I return from having walked to some nearby shops..
“Very well sir how are you?” he beams as he opens the door. I greet the receptionist at the desk and then I see Doug coming down the stairs.
“Hey Doug!” we greet each other and sit down in some chairs in the lobby to catch up. Despite some major mishaps his project has gone well. The woman hit by the car had recovered and Blessing had been released.
After we’ve thoroughly caught up Doug remarks “woo-wee that girl over there is pretty, have you met her yet?” indicating a very elegantly dressed young lady sitting behind a table in the back corner of the reception area, some kind of promotional posters are all around here. She had been there when we had first come through here two weeks ago as well.
“No, I haven’t actually.”
“Well, go talk to her!”
“I, uh… okay” I sigh. I don’t make excuses to avoid a challenge is what I don’t do. It turns out Princess _______ is an actual princess, her grandfather is a king somewhere near Port Harcourt in the Igbo region of Nigeria in the south. She is presently engaged in selling luxury real estate in Dubai. Nigeria is a place where gorgeous princesses sell luxury real estate in Dubai in hotel lobbies I think to myself in wonder. I’ve heard it said that some people in Nigeria fly to France for lunch.
Walking up the stairs to my room I find Anthony, the same guard who had been there when I arrived two weeks ago, standing in the stair landing, and we get to talking. He’s clearly bored out of his mind, so I linger and talk to him for forty minutes. His job is to stand tehre in the stair landing all night, eight hours, and isn’t allowed to sit down. As we talk it comes out that he lives near the famous Zuma Rock just outside of town, and he invites me to accompany him there in the morning. I have nothing on -- the organization scheduled three days in the capital for me to write the report that took me an hour-- so I take Anthony up on his offer.
“Meet me here at 7 he tells me.”

In the morning I get dressed and step out of my room at 7:00 and there he is at the landing, exactly as I left him as if he’s been frozen in time since then.
He would normally take a bus home but we call a taxi. A short drive out of the city and the massive rock looms before us, nearly a thousand feet tall with sheer barren grey sides and a flat top, like an enormous recumbent elephant. Near its base Anthony points out a large hotel that he tells me was never used after being constructed due to the persistent belief it is haunted by the spirits of Zuma rock.
We get out of the taxi near the base of the rock and walk up to touch it. Nearby some kids are tossing rocks at a mango tree to knock out mangos, and a family appears to be having a picnic nearby. They wave us over and offer us some fresh mangoes.
We walk a short distance to Anthony’s village and he takes me to a man who makes palm wine because I had expressed an interest in it and hadn’t heretofore been able to find any. The palm wine is tapped from the crown of a palm tree by driving a small pipe in and collecting the sap that flows out as a clear but somewhat milky liquid. It tasted strong but not too bad. Since Anthony hadn’t asked me for anything, I bought him a bottle of palm wine from the tapper, before returning to the taxi to return to Abuja town. 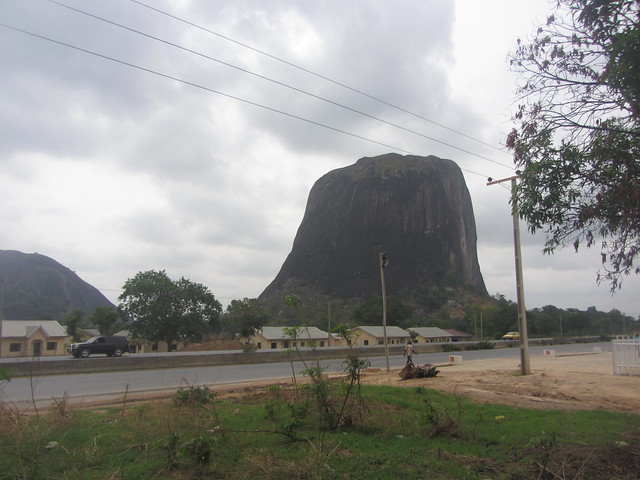 Days 15 - Last Day
February 27th, 2012 - “And they made Kris a chief!” Doug is telling Dr Walter, an irrigation specialist who just arrived to start his own project.
“Oh they made me a chief too, in Ghana I think” he chuckles. Later, as we’re both going to our rooms, which are on the same floor, we pass Anthony on the landing.
“And this is Anthony,” I say, indicating my friend. Dr Walter looks at me as if to say “why are you introducing me to the furniture?” and I sigh. Dr Walter isn’t unusually haughty, but most people dont’ take much notice of the hotel staff.

I need to think of a good replacement princess name obviously. If you happen to recall way back in the beginning there was a dream sequence with Anthony-as-the-founder-of-Abuja at Zuma Rock, and this is the part it links into. Also I want to work on "Dr Walter" because the brief details about him here make him just come off as haughty but really I think he was probably more contientous than your average person.