This Is How We're Rollin!

So for this roadtrip I'm taking my Eurovan, affectionately referred to as either "the brick" or "the Krismobile." Its always had persian rugs in the back to prevent the floor from getting dirty. The backwards facing seats are usually in a removed state to allow transportation of things like centrifuges for honey extraction and other such equipment, but we put one back in for the roadtrip. Also note it has a fold out table.
But the real crowning glory of it right now is that among the things Janelle needs to transport to Seattle is a big potted plant. So we placed that right in the middle of the car. This picture doesn't do the hilarity justice: 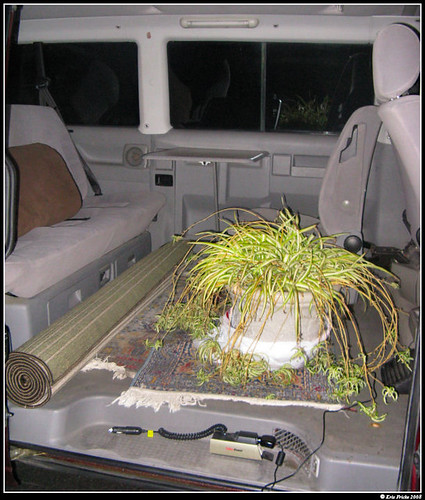 But I find the whole scene to be relatively hilarious.


Also Janelle is currently in a barista competition in LA and had to invent a drink to make tomorrow so we spent awhile this evening experimenting with different concoctions. Apparently she's currently in second place to the world champion (there's a world champion barista? who knew) so if tonights creation pulls her ahead, I might be travelling with the best barista in the world? Also all this experimentation felt very food channel. Also.. now I'm wired d=
Tags: epic roadtrip 2008, roadtrips, travel, travelogues
Subscribe