Sorry for the delay. Been busy helping my friend Janelle move out. I will now commence my attempt to recount the trip one day at a time.

Day 1 - Orange County, CA to San Francisco (Map) - Monday, Aug 25th
Trip started illustriously with a visit to my mechanic in the morning. The engine check light had been on, the power socket didn't work and neither did the heater. The mechanic apparently assigned some 18 yr old (or less?) tech to fix these things and when I came back after noon I had to chase him down and have him give me back part of the dashboard he had neglected to put back in and to replace the fuse for the power socket (the heater never did get fixed).

Then I went to go pick up two riders I had found on craigslist. First was Clark, riding up to SF with us, whom I knew little about. But I knew he was gonna be cool when I said "I'll be wearing a Flogging Molly shirt" when I talked to him on the phone before going into a Dennys to meet him and he was like "Flogging Molly awesome!!!" He was a awesome 30 something guy with lots of tattoos and such.

Next was this guy Brett, who I also barely knew anything about. My first impression was a generic looking 18 yr old OC kid wearing a baseball cap. But then I was like "wait.. is that a mohawk under that cap?!" and it was. He turned out to be real cool. Had barely been out of OC before so he said things like "I want to eat at Taco Bell every day of the trip!" and "whats a co-op" and "whats a hostel?" But it was fun seeing him experience the wider world for the first time and I think he'll do just fine.

The drive from OC to SF is super boring so this is the only picture from that day: 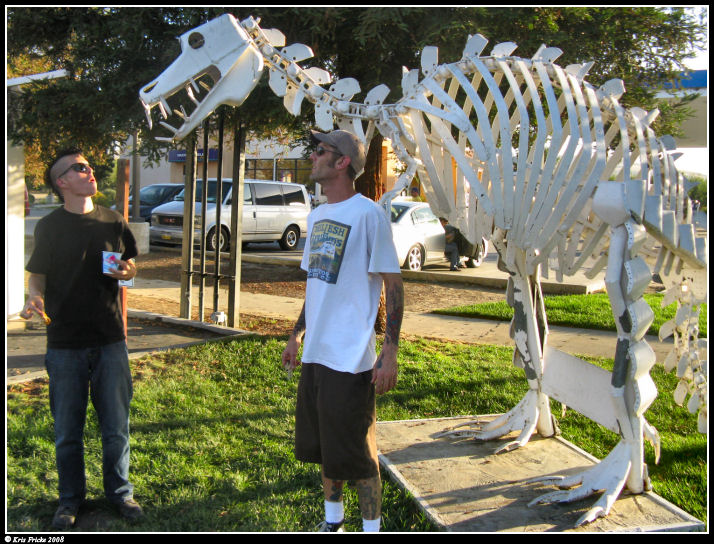 It is a sculpture made of tank parts in some dinky town off The Five. Thats Brett (left) and Clark (right).

That evening we prowled SF a little and stayed in a hostel downtown.

Day 0: Day before the above, I hung out with Janelle while she tried to invent a drink for a barista competition. You probably don't recall but I actually blogged about it. Well on Day 1 of the roadtrip she had said competition. She ran out of port during it, which was a critical ingredient, and this kind of overlaps the roadtrip because I was about to go past where it was happening in LA so I was going to bring her more port BUT she made her own (!?!)
She, I don't know, mixed things at hand together until she had something comparable. I am totally amazed that she (A) was able to accomplish this at all, (B) was able to accomplish this without it tasting nasty, (C) was able to do this and WIN THE COMPETITION with it!! Truly she must be an amazing alchemist.
Anyway, she'd be flying to Oakland the next day and catching up with Team Roadtrip in Berkeley. More on that TOMORROW...