Travelled from Eugene, Oregon, to Portland, Oregon.
Stopped in Salem in the middle long enough for me to check out the Willamette University School of Law there and meet with the Assistant Dean of Admissions. Despite having not personally seen my previous letters of recommendation he seemed to strongly believe I should get new ones. I find this very irritating since I'm not meeting anyone better to write letters of rec and those two aren't learning anything new about me in the mean time... /=

So one very very weird thing about Oregon is its ILLEGAL to pump your own gas. You gotta let some filthy looking attendant do it for you. Really weird.

In Portland we deployed Ben to seek his fortune on his own on his bike (named "Red Rooster" apparently), Janelle, Brett and myself then proceeded to a coffee shop Janelle had heard was excellent (recall she's like the world champion barista). Janelle's friend Brian joined us there.
Then we walked around downtown a bit and normally I hate big cities but I've got to admit Portland seems pretty awesome. Most cities are filthy at ground level, especially downtown, but the whole downtown area was quaint and delightful.
After we had indian food downtown we went to a street fair somewhere around town and it was pretty cool. It was really neat but too dark for pictures to come out. After walking to the end of the street fair and back we settled on the outside patio of a bar and had some drinks. 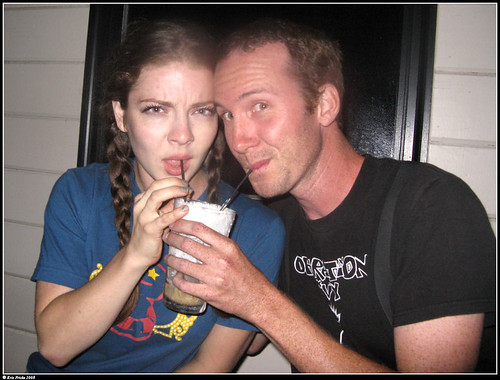 Brett being under 21 could only order root beer ... but we discovered Ouzo is an excellent addition to root beer (via flask, under the table) ;D

That night we crashed at Brian's place. He has an awesome little house that was built in like 1904 and he's presently renovating.

But yeah, I'd never been to Portland before but I've decided it is an awesome place and want to move there.