After an hour of various attempts to wake Janelle up, including turning on the light (she got up, glared at me for a second, turned it off, and climbed back into bed, possibly without ever waking up) I was finally able to roust her by putting a really annoying song on repeat on my laptop and leaving it next to her. (= Fortunately once she DOES finally awake she's always in a good mood, but I discovered she's amazingly hard to wake up (though this might work out well since I'm told I sometimes snore pretty loudly), especially when in a basement room thats still pitch black at 11am.

Having been out having his own adventures Ben biked over to where we were, but we left Brett there because he had decided he liked Portland so much he wanted to stay there a few days.

So Janelle, Ben, & I headed on our way. Across the river from Portland is Vancouver (Washington), which I think is a bit unnecessarily confusing vis-a-vis Vancouver, British Columbia. Headed up the Five a bit but then got off it to head towards Mt St Helens. Smaller roads are always so much nicer than the Five. Mt St Helens it turns out is in "Skamania" county, which I thought was pretty awesome.
Our first stop was the Ape Cave lava tubes. Janelle and I went down and explored the 3/4th mile underground tunnel while Ben wandered the forest. The tubes were awesome. At the far end we ran into a family whose lantern had gone out (!) and escorted them back the the surface. 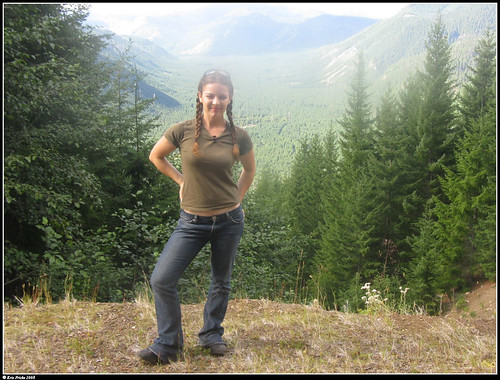 My one badly exposed picture from this day. I was having camera problems ok?

Drove through the national park. I was, of course, beautiful. Stopped to eat at a little town on the far side where the lady tending the bar greeted with us "so, there's finally gonna be a woman in the white house, and its not a Clinton!" (Palin had been announced that day). Also there were "No profanity!" signs on the walls in several places, and across the street a big "One Nation Under God" billboard painted on the side of a building. Welcome to rural Washington?
While parking here my bumper got eviscerated on a bolt sticking up from the curb and pulled off. )= Fortunately Janelle is amazing and tied it back on using her cell phone recharger.

Drove on to Seattle, getting there after dark. Dropped Ben off near a strange grove of trees somewhere in Seattle -- he was going to find a Co-op which allegedly was hidden deep within the trees. Then Janelle and I proceeded up to Everett about an hour north where her dad's house is.
Her dad happened to be out of town for the weekend so I never met him, but her sister was there, and her sister's friend was crashing in the other extra room so we both slept on the floor in the living-room. (Between you and I, I thought it was a bit odd that the sister's friend didn't cede the room to Janelle herself, but whatever)