Day 9 - Back Down the Oregon Coast

After crashing at Brian's place again we picked up Garnesh the British guy (whom recall we had missed in Seattle, he greyhounded down to Portland and caught up with us). Then on Mindy's recommendation we ate at this awesome place called Voleur somewhere in the middle of Portland that had fancy delicious food at highly affordable prices (Janelle and I got this fancy mac and cheese with sausage, a burger with black beans on it and a salad), and

xaositecte and my friend Sameer met up with us there. They were apparently about to embark on a roadtrip of their own eastward to Boston and I unsuccessfully lobbied them just to join ours on the spot (hey worked on Aaron last year). Then we proceeded to and down the Oregon coast (awesome as always). Stopped by the Rogue Brewery (Maker of Dead Guy Ale which you'll see around and I recommend) (Ganesh has a pic of me there looking like an old codger) 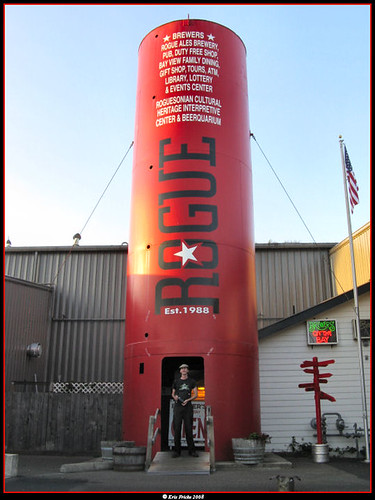 After the sun set we passed two hitchhikers who looked like non-crazy guys in their early 20s, and it being gathering evening and the van being relatively empty we decided to give them a ride to the next town. "How long you been on the road?" I ask. "Six years" "Oh you do this every summer?" "No I've been on the road for six years -- my dad was a crackhead and I ran away when I was 14." So they had a lot of interesting stories.
That night we camped in a campground at a small state park called Humbug Mountain.