Day 11 - Triumphant Entrance To Davis (on a flatbed)

So we wake up in an empty lot in the middle of Weaverville. We bummed around town until around 1pm I think the mechanics announced that they had figured out the problem and they didn't have the part we needed and it would take five days to get it there (!!).
So we arranged to have the car towed to my awesome mechanic in Davis (203 miles, but Janelle has Super Awesome Triple AAA Status with 200 miles of towing (I only get 100 /= )). So they put the Krismobile on a flatbed and Dave (who had been our towtruck driver the night before) joined us for the around three hour trek to Davis.

And so we arrived in Davis that evening in style on the flatbed. My super awesome aunt and uncle Ben & Bev were awesome enough to let us crash at their place even though my cousin Holly and her husband Simon were visiting at the same time (which was actually excellent because I would have missed their whole visit if I hadn't crossed paths with them there (they currently live in England))
While walking back to Ben and Bev's from down town this creepy guy started walking with us and wouldn't leave us. It was the creepiest thing thats ever happened to me in Davis and I was like oh great now Gargamel and Janelle are gonna think Davis is weird. After polite hints that he should leave us failed I progressed to "am I going to have to call the cops?" and he tried to argue I wouldn't have a case, so I told him that when we got to the Co-op (which was coming up ahead and a reasonable well lit public place) I would be calling the police and waiting there until they arrived. He said he'd call the police himself and say I was following him, but when we stopped there he kept walking and so we were finally able to backtrack back to Ben and Bevs. d=

Went out again and strolled about town. Gargamel apparently saw a palm tree for the FIRST TIME EVER (wtf aren't they all over tv?) and was astounded ("what IS that?! it looks like a giant toilet brush!!"). Eventually we ended up at the local brewery, Sudwerks, where not much was going on but we had ourselves our own little pubquiz asking eachother trivia questions. 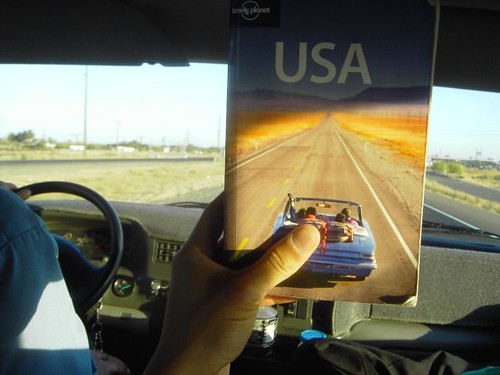