As you may recall, I am a beekeeper. So with the topic open I of course decided to go with an entry on bees I've been meaning to write for awhile now. See also the links at the bottem to a number of other entries I've written on bees

Killer bees. You have no doubt heard of them. After being accidently introduced to Brazil (from Tanzania) by a mad scientist (Warwick Kerr; my boss actually has met him and reports he's a very nice man) in 1957, the Africanized Honeybees slowly spread through the Americas. By the early nineties they had reached the southern United States and there was panic. Now they are pervasive across the southern reaches of the United States, since they easily outcompete European Honeybees (there are no native American Honeybees).
However this entry is not about Killer Bees. This entry is about the bees that are actually driving killer bees out of their own homeland.

Bees that can clone themselves. 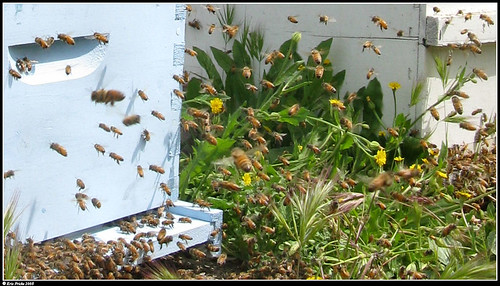 Clone Wars
The binomial name of honeybees is Apis mellifera. Honeybees can further be divided into subspecies.
Apis mellifera mellifera I'm assuming was the first one named. It is the German honeybee and was popular previous to the 20th century and was the first to be introduced to the Americas. A. m. ligustica is the Italian honeybee, which is currently the favourite among commercial beekeepers. Generally this is what commerical beekeepers keep (at least in the US).
A. m. scutellata is the so-called Killer or Africanized bee (-ized because its assumed to be a crossbreed between the 26 queens Kerr brought over and "nonafricanized" bees). As mentioned they are native to Tanzania and southern Africa. Bees in Europe evolved to be docile because those that survived were those people could work with to harvest honey. In Africa predators (and people) would destroy the hive to get the honey, so the bees that survived were the ones that were mean as shit
And A. m. capensis is the Capetown Bee. Because there are strong winds around Capetown (South Africa) the queen would often get swept away on mating flights (did I mention queens go on mating flights?). To compensate for this potential loss of the only egg-layer (which would theoretically mean the death of the hive in 24.7 days), ALL the workers in a capensis hive can lay eggs!! O=
HOWEVER, since these bees have never mated, their eggs have only the mother's DNA. They are therefore clones of the bee that laid them.
Furthermore, capensis bees can actually infiltrate scutellata hives without being killed (the usual treatment of illegal immigrants in beehives). These "undocumented workers" then go about laying clones of themselves! 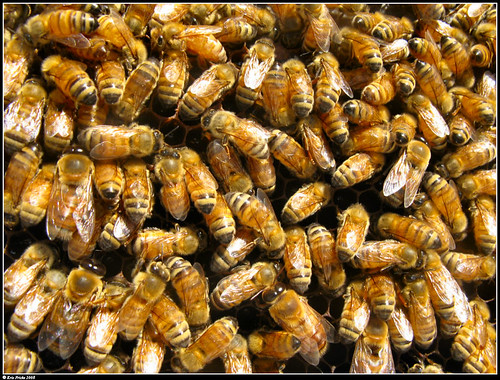 It seems the capensis bees then proceed to loaf about and are underrepresented among the bees foraging for their new host colony. As they clone themselves and live off the welfare of their host colony the burden soon becomes too great and the scutellata hive collapses (not literally House of Usher style, but everyone starves). I’m assuming the capensis clone slacker army then moves on to a new scutellata hive.

I find this interesting because, while there are certainly other insects, such as the cuckoo wasp (and animals such as the cuckoo bird) who sneak their eggs into a similar animal’s nest to be raised by them, I know of no other creature that is such a social parasite. They have a normal lifecycle like any other bee (the workers don’t reproduce themselves in a hive of their own with a queen of their own), but if their queen is lost or they become seperated from their hive, they switch to a new parasitic lifestyle. And furthermore they don’t completely loaf, they DO do SOME chores, just extremely half-heartedly,like bad roommates.
So yeah. Apis mellifera scutellata may be taking the Americas by storm, but back home they are being pushed out by slacker clone armies.


Related
The Birds and the Bees - My official guide to bees, wasps, yelloyjackets, bumblebees, hornets, & bears oh my!
Colony Collapse Disorder - Everything you wanted to know about everyone's favourite thing to ask me about.
How to Write a Bee Attack Article - Since newspaper writers always bungle it.
A Bee In Math - Find out how the numbers 24.7, 2,500, 61,750, 500, and 54f relate to bees.