Hope. LJ Idol is full of hope this week. Hope is in the air. Hope that one’s entry will be well received, hope that it will do well in the polls. Hope that the next topic will be a good one, one that provides opportunities for good entries. A lot hinges upon the week’s topic. Will it be something that provides wild opportunities for creativity and interesting hints of flavour, or will it result in a selection of entries the upcoming week that’s as exciting as a bar that only serves lager?

Sometime over the weekend after I’ve read my fill of the previous week’s entries, and cast my votes (always at the very least read the last place votes in every bracket, after all, it’s the only position that matters that week), my thoughts turn to hoping the next topic is a good one. That and displeasure that the weekend is almost over.

Its usually sometime after noon on Monday that I’m taking a break from getting stung in the face repeatedly to check that week’s topic. First order of business, I always analyze the prompt. Any prompt, be it even just a word, can by analyzed.

If I don’t know it already I’ll look up the actual etymology of the word (Hope: believed established in its current form around 900 A.D.* from Middle English “hopen” from Old English “hopian”). I don’t know how this could possibly help me, but I think its good to have as thorough an understanding of what you’re working with as possible.

Secondly, I ask the question of “how can I twist this prompt to something its completely not expected to be?” “Saying Goodbye?” how about “Saying Goodbye When Your Loved Ones Have Been Turned to Zombies!!!” “Moment of Bliss?” How about the blissfulness of a moment of peace in an otherwise fubar situation? “Hope?”…
Not just LJ Idol but pretty much any time I’m given a prompt my first reaction is to twist it. I took a creative writing class for fun in college and every paper I got back with “not quite the prompt, but good!” written on top I considered a success.

boxsofrain “’Hope?!’” “Yeah I don’t know…” … This is actually an important stage because in all my history of writing I’ve found many of my best ideas come from talking topics over with friends.

Then I usually let the prompt sit in my head for a day. That first day I don’t stress about coming up with an idea. Just let it boil away in my head by itself.

By Tuesday if a brilliant idea hasn’t struck me yet. I’ll maybe turn up the heat on talking about potential topics with my friends (

hereticxxii has been a very help as well). Or perhaps in between bottling beer (honey ale!) at work and writing a legal brief I’ll sneak off to add the proverbial malt to the proverbial hops of ideas in my head, and post a brainstorm post. The brainstorm post will be a long ramble of barely coherent false starts and hanging storylines, but at least I’ll friends-filter it and put it behind an LJ cut.

By Wednesday an idea will surely be fermenting away in my head. I’ll be hashing out the details throughout the day. By that evening I’ll be all ready to write it … but if the past is any guide I’ll procrastinate away the evening until its too late to write it.
Because before starting an entry one must get into the right mindset of silly and satire by watching the latest episode of Colbert Report (online – I don’t have a TV), and then one must get a feel for the mood of the audience by reading up on the LJ Idol entries posted thus far ( / make sure no one has already taken your idea!!)

By Thursday evening I will once again procrastinate writing my entry, using the same excuses. I will additionally be aware of the alarmingly nerdy fact that if someone wants me to hang out or something that evening I’ll be faced with the crisis of going out and potentially not having an entry by Friday morning, or saying no to real world activities for the sake of blogging! O= Fortunately this dilemma has thus far been avoided by my utter of lack of a real world social life ;D
Next thing you know its 00:44 in the morning and I’ve bottled what once seemed like a decent idea into the most craptastic TL;DR ramble ever.
But this is what we have to work with since we’ve mortgaged off our hope until the very last minute (turns out it was subprime?). Since this is still a first draft at this point I’ll probably let it sit overnight in the hollow hope that after spending a few hours in a fetal position in the dark I will rise up late for work and have time to somehow forstall the entry from tasting like brettanomyces.

And then its time to release the entry for general distribution. Hope it does well and prepare to begin the process all anew.


Oh and a Fairly Random Picture of the Day 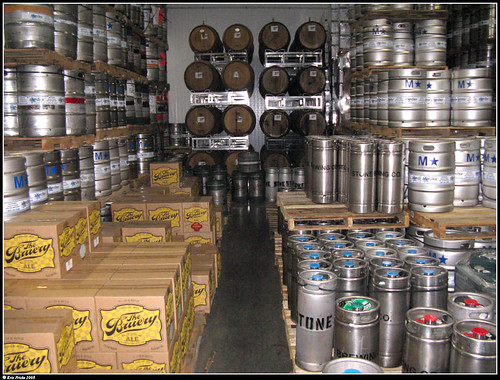 Barrels of Ideas!
Many people will someday wistfully recall them with the words "seemed like a good idea at the time"

Notes
* That etymology information from a simple search on dictionary.com. I’m actually rather confused about the 900 AD year, since Middle English was the meshing of Old English with Norman (French) after 1066 … so how can a modern english word be derived from a middle english word before middle english even existed?! Its questions like this that keep me awake at night (literally, since I should have gone to bed already)