In college I minored in Communications (And History, And Political Science). Now Comm is a notoriously useless major, but I think thats primarily because every sorority girl and metrosexual male took the mass media comm classes thinking they were gonna make it big time on MTV. I took classes like "Organizational Communications" "Conflict Resolution," "Theories of Persuasion" (the only class I had where the professor spent the first day addressing the fact that some people think the very existence of the class is unethical!), "Intrapersonal Communications," "Theories of Cognition," etc. Things which, in my opinion, were quite useful (anyone want to hire me to fix communication in their organization or resolve a conflict?). On top of this add Military Science "Intro to Army Leadership" and "Intro to Army Organization" so I know how to communicate under fire and.. ;D

This would well prepare me to write a academic analysis of "LJ Style Rants," which is the LJ Idol topic of this week ... but I'm at a beekeeping conference in Lake Tahoe. So I don't have any of my communications books or notes to add big fat citations from (I could, however, tell you all about the sub-lethal effects of pesticides on bees with original quotes from researcher the lovely miss Judy Wu).
However, I have had three glasses of wine (I actually walked away from an open bar to come write this! --and yesterday I just went to bed early, clearly I am no longer the trouble-maker I once was!) so I guess this could qualify as a rant about rants under the "anything you write after consuming alcohol is probably a rant" clause.


On Rants, LJ Style
First and foremost, we must address why people blog at all. I believe the reason people blog can be broken down into the following categories:
(1) Expressing oneself, purely to satisfy either the need to vent or the need to feel understood by sharing your feelings with others.*
(2) Expositional, ie to convey information. The primary example of this I think is that most of my mother's side of the family (mum, grandparents, uncles) all have LJs (!) and they write entries I believe because they know other members of the family are interested in what they're doing, and blogging is better than the mass emails that used to go around about the latest.
(3) To be read, this is different from the above. For example a lot of humorous bloggers blog to amuse others, rather than communicate information. It seems more often than not for LJ Idol I've written entries that convey information ... but I do it not for the sake of conveying information for the information's sake but to be read. I make no bones about it, I write to be read.
(4) To practice writing. Pretty self explanatory. I get the impression a number of people joined the LJ Idol thing to practice writing.
* (I don't blog to express myself, I do that by texting

Clearly, most people probably write for a combination of the above reasons, or make some entries for one purpose and some for another.

Open to: All, detailed results viewable to: All. Participants: 52

What is the PRIMARY reason you blog?

When it comes to rants, however, I think we can all agree that people usually do it for the sake of venting, ie just expressing their feelings for the sake of feeling expressed. Rants are usually about something that has been bothering the individual in real life and they either did not get a chance to express themself at the time, it would be highly inadvisable for them to do so (say for example the target is their boss), or it would just be rather socially maladjusted for them to do so (the target was some stranger and its a topic it would have been odd to confront them about). I have a particular rant I'm just itching to do but unfortunately it falls under the inadvisable category I think )=
I think expressing oneself can be a valuable way to relieve tension and stress. If one feels like at least SOMEONE understands their plight, even if its faceless people off in internetland, I think one is still likely to feel less bitter about perhaps not feeling properly understood or appreciated in the workplace, or such.
However, there are two potential pitfalls of rants. Both of which pertain to it being found by the target group.
(1) Dramapocalypse!!
(2) Especially if you know they are likely to become aware of your rant, or your rant is likely to be read by many people who mutually know them, your rant could be part of a passive aggressive behaviour. That is, not actually dealing with something but acting out in an extremely indirect rebellious and insubordinate manner more likely to severly annoy your target than actually accomplish anything. Being passive aggressive is to be avoided.
By and large, throughout my studies and experience (In college I was additionally involved in countless clubs and organizational conflicts -- especially as Chief Justice of the student government) I have found that almost invariably MORE communication is better than less. It doesn't matter if its organizational planning, breaking up with someone, or actually firing someone. More justices got their asses impeached off the Court by me than anyone else, since I had to do it for lack of attendence and such and no one else bothered except for political reasons (such as the three attempts to impeach ME ;D ). At first when I was young and naive I tried communicating with the subject justice as little as possible (since it is, after all, a pretty awkward situation putting someone forward to be fired), and that was always a huge mess. Later on, however, I had it down: it was cut and dry and non-negotiable that you'd be forwarded to the Senate for removal if you missed two meetings, and when it happened I'd give the justice all the exact same information I was going to provide the Senate myself, and while Justice Raff* STILL tried to blame me and lied about having a class conflict he didn't have, it was a LOT less messy.
(* name NOT changed because I don't believe in changing names, ever)
The same goes for dating. I hate hate hate it when people rather than deal with sending a more direct message decide just to avoid communication until the other person gets the hint. It wasn't until I invoked the magickal properties of flowers that Marla broke a month of silence yesterday to inform me that no she wasn't at all mad at me, we're just over. Thanks Marla.
In nearly every situation I can think of, more communication is better for both parties. Now clearly there are exceptions, such as playing poker, or negotiating something, or not hurting someone's feelings TOO much. But these exceptions are pretty clear.
And bringing it back to rants, I do think if you have a problem you can possibly address by more direct in-person communications, you should, BUT like I said most rants are about situations where that is not feasible. As long as your motive for ranting isn't passive aggression, I think it serves its purpose of allowing you to vent well.
But going back to pitfall (1), NEVER post potentially dramapocalypse causing entries in public! I have found that despite all odds, the target person SOMEHOW WILL FIND IT!!!! 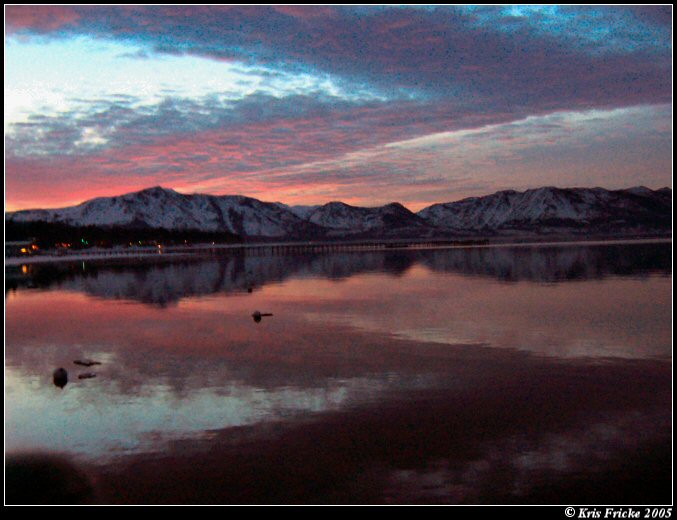 Lake Tahoe
(Taken not this trip but a previous one)