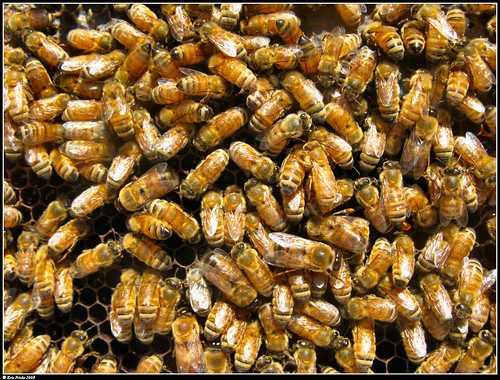 Imagine, if you would, there is a bee crawling up your leg. Inside your pants, on your skin, up your leg. In fact, imagine there are several. There are bees on your arms, in your hair, there may be one on your nose. And the air around you is filled with bees. Angry bees. You're standing in three inches of mud, and as soon as a grizzly farmer comes down the ramp with a beehive (cursing a blue streak as he gets stung), you will run up the ramp towards where the bees are thickest, hoist up a sixty pound hive, and carry it back down the ramp to plop it in the mud next to other hives. You will get stung.

This is how I got stung 130 times in one night last February.


The math had added up to the bees being docile. When we picked them up while it was snowing in Redding they had been docile, and it was now probably less than 54 fahrenheit, which usually means bees aren't very active. So we didn't bother to put suits on. However we forgot to take into account that we had just jostled the bees over three miles of bumpy muddy road to get to this particular piece of farmland in the middle of California's Central Valley. We were definitely not prepared for what happened when we pulled the tarp off the trailer full of beehives. The bees angrily billowed out with a vengeance. Two farmhands ran for their lives and weren't seen again for the rest of the night.


We had gotten a killer deal on the bees. $45 a hive right at the start of almond season. The beekeeper selling them in Redding was retiring, due to the loss of his third finger to beekeeping equipment (someone told me at convention that its less common now that most people have their boxes made by professional woodworkers rather than make them themselves, but it used to be that most of the guys at convention would be missing at least one finger!). Almond pollinating is currently the most lucrative thing to do in beekeeping -- last year we got $125 a hive simply for having our hives in Almond fields from February 1st through April 1st. So we bought 100 hives for $45 each and drove them straight to the almond staging area where we got $125 for each one. Thats how you turn $4500 into $12,500 in 8 hours. ;D

The pass at the southern end of the Central Valley we needed to use to get home was snowed in, and the road was snowed in north of Redding, with the possibility of closures moving south of Redding, so while we were never directly in much snow, we were surrounded and potentially stranded by it. 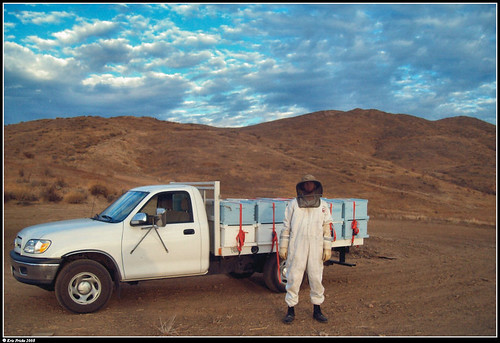 To coordinate between beekeepers and farmers in need of pollination, there are Bee Brokers. They seem to usually be large beekeepers themselves, who have been at it for a very long time and just have all the connections. Bee brokers get about $7 a hive (a hive broked?), and can coordinate tens to even hundreds of thousands of hives.
It was to the bee broker's yard we (Dr Steven Theones & I) were moving our bees. When we got there the yard manager apparently hadn't been expecting us that night and was already drunk. He was a comically grizzly farmer type -- overalls, plaid longsleeved shirt, extremely bushy beard, and he had this kinda farmer drawl, he "jist tawked kin'da sl'ow."

So like I said, we hadn't put suits on. The farmhands fled, Dr Theones & I hurriedly put suits on, and the yard manager was already drunk and mostly covered (and extremely grizzly) so he just cussed a lot. At this point, however, we were already covered in bees (in the dark bees tend to crawl A LOT), so we were putting the suits on over the bees that were already on us. Additionally, in the dark and being in a hurry it was useless to try to zip the veil on, so that major gap remained.
One just had to work through the stings. I had bees crawling over EVERY inch of my body. ::looks dead serious:: EVERYWHERE.


Extrapolating from the number of stingers we pulled out of my arms, legs and neck, we made a rough estimate of 130 as to the number of stings I received. The lethal dose of bee stings is said to be 10 per pound of body weight, so this would have been approximately 10% of a lethal dose for me. It felt kinda like.. having a really really bad sunburn. I could barely move for the next 24 hours (which didn't stop me from helping move a second load of bees a day later).


If I learned anything from the experience its probably the opposite of what you'd expect. Now I know how much WORSE things could be so I DON'T bother to suit up if I'm "only" expecting a dozen or so beestings. Thats nothing.


This story eclipses my previous best stories of being unprepared for things happening at work, such as: (1) being sucked into a wave machine intake; and (2) being flushed down 200 feet of piping because someone didn't realize I was in there and turned on the water.