Beer tasting. I go every Tuesday to the beer tasting at the local Bevmo (for those from Far Away Lands, Beverages & More is like a grocery store sized liquor store).
At first I thought it was a hoot that half the people new my name and half of THEM knew my taste in beer (so I'd come walking up and people would be like "ooh we're having lagers today you're not gonna like it!"). That was only the beginning.
Regulars started bringing cookies and brownies to the tasting that they'd baked themselves. I of course brought beer I'd brewed. We probably violated all kinds of FDA regulations.
Once four guys who didn't know eachother beforehand got to talking at a Friday tasting and all decided to go straight from there to Vegas for the weekend (one had a room comped), and they did!
Anyway, yesterday we reached a new level of silly. As I walked in, extremely late (wearing a santa hat), Jeff, the host, said "dude, you're late, we're out of beer!" to which I responded "thats okay, I'm kind of sick, wasn't really looking forward to drinking anyway" ... ie now I'm showing up at beer tasting with no intent to drink?! (though while I was there I bought another four pack of official best beeer ever* -- Goose Island Brewing "Bourbon County Brand Stout" (thick as tar, black as my heart & 13% ABV!).

Oh and earlier in the day I emptied Bevmo's shelves of their (3) four liter jugs of Carlo Rossi Burgundy... O:)

* Not including Sam Adams Utopias, but thats on a whole new level, if you can find it for less than $200 please inform me immediately 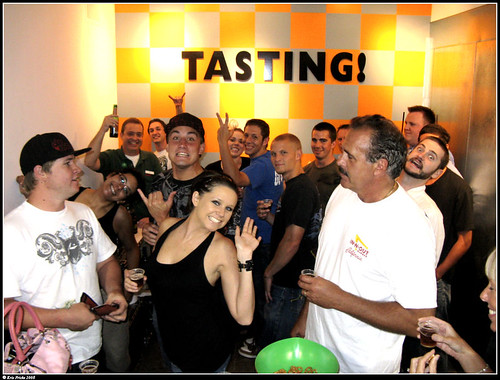 Yesterday we spent the day at work distilling tequila from agave juice. If you're interested in hearing more about that, see my post in

homedistilling.
Also, I went to Bevmo to get the aforementioned jugs of wine so that we can give making brandy a try today. (=

And as long as I'm reporting real world happenings (in reverse order), this past weekend I actually got invited to a college party at UC Irvine and partied it up over there.
And then totally almost forgot about my own work holiday party


Random: This was recently brought to my attention and I find it hilarious: They're Made of Meat?!
Tags: activities of dubious legality, beer, beer tasting, bevmo, distilling, real life
Subscribe