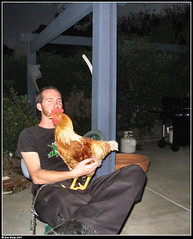 The eggs weren't even hatched yet. Not a crack. But they were cheeping. I didn't know they could do that.

It all started with a previous batch of chickens. Mum is a science teacher, and her class had raised up a gaggle of chickens from incubated eggs. At the end of it we ended up with a rooster named Falafel and a white hen named Tzatziki (I called her Zeze for short).

Unfortunately, as roosters are wont to to, Falafel had this habit of crowing between 5 and 6 am. This doesn't fly in the suburbs. I really liked Falafel -- he had a lot of personality for a chicken. But he had to go. But we were able to trade him in at the feed store for a bantam hen we named The Seniorita. 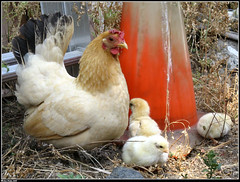 Chickens, as you know, lay eggs. Normally they just forget about them and wander off. But the Seniorita would habitually sit upon her eggs until chased away, and purposefully laid them in hidden places.
It would sometimes take us awhile to find her new place, and then we'd find an egg trove. But as soon as it was found she'd relocate. So it was Easter year round in my backyard.
Clearly she desperately wanted to be a chickenmom. But she hadn't ever been pollinated, so to speak, by a rooster, so it wasn't going to be.
Eventually, however, we took pity on her and bought fertilized eggs from the feed store. One by one we replaced her unfertilized eggs with fertilized ones while she wasn't looking. She didn't seem to notice that her eggs were getting a LOT bigger than they formerly/normally had been (bantam hens of course being fairly small).

About a month later, they started to hatch. She was, I'm pretty sure, overjoyed. Her chickendreams had come true!! She sure showed "you can't have babies if you've never met a rooster" Zeze!
Unfortunately, in her joy and enthusiasm to take care of her new chicks, she completely forgot about her three remaining eggs!
So we took them and put them in a cardboard box with a blanket and a lamp for heat.
"Cheep cheep" -- these eggs were cheeping! Every few minutes, one or the other would let out an adorable muffled "cheep cheep"
If I recall correctly the first one hatched overnight. In the morning, there was a chick standing there looking damp and confused. We found the chickenmom still hunkered down with all her chicks under her wing and pushed this one under her wing as well. 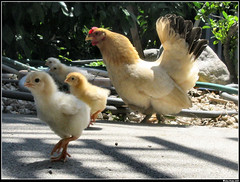 One by one the other eggs hatched over the next 24 hours (video!) and were reconciled with mother without incident. However, there was a problem.
She wouldn't accept the runt. The last one hatched. I don't know if she just had too many babies at that point or he came too long after the rest (probably about a week after the first one?) for her to feel like he was truly part of the same family, but she wouldn't take care of him, wouldn't let him hang out with them and play in their reindeer games -- she'd actually chase him away and peck at him )=

So back in the box he went. I made sure he stayed warm and fed and took him out and played with him whenever I had a chance because I worried he'd get lonely. I remember watching TV with him on my lap (and I don't normally watch tv!).
I'd take him for walks in the backyard. Unfortunately I had to guard him from the other chickens, who would charge at him if they got half a chance. Rude. )=

Eventually a student from mum's school adopted runt. I kinda missed him but hopefully in a one-chicken-home he'll get the attention and lack of pestering he deserves.

..at least until they have to deal with... 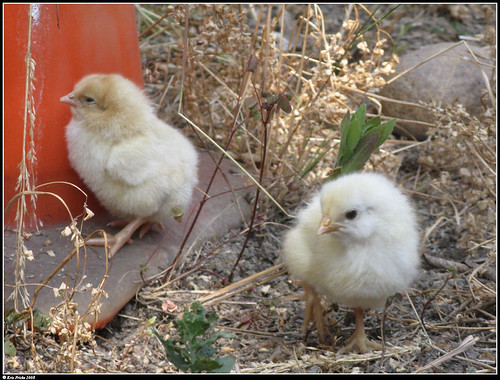 Some more pictures of the chickens