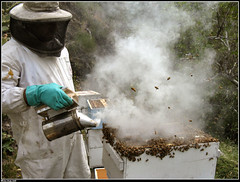 Beekeeping is dangerous. The beekeeper we bought most of our bees from is retiring because he's lost too many fingers to equipment (four I think?). The only casualty to Africanized Bees in California has been a beekeeper, but by and large the bees are the least of our problems. The single most dangerous piece of equipment we have? The smoker.
Its more likely to ruin you financially than lethally however -- I know two beekeepers who were put out of business when they or an assistant accidentally started a fire with a smoker. In one case it burned a large area of national park and the beekeeper will never ever be able to pay off the millions of dollars of damage that were landed upon him.

Consequently I've always been very careful never to set my smoker down in dry grass or near anything flamable. Still though, on Friday the danger of smokers was highlighted for me.

I was working the bees when my smoker appeared to go out. I was trying to wheeze the last bit of smoke out of it to avoid dealing with relighting it, when I smelled bananas -- the smell of the attack pheromone. 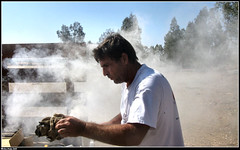 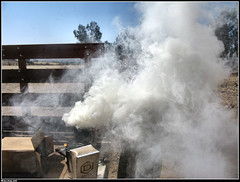 "dealing with relighting it"
Dave IS standing in the exact same place in both pictures.

So I set the smoker on a double-high hive and opened it up. Burlap didn't appear to be burning. So I pulled it out and reached for the lighter. However there was a pretty decent breeze, and as soon as the burlap was out of the smoker this breeze caused it to suddenly burst into flame!!
So I'm holding a piece of burlap that has flames the size of my hand leaping off it ... my hand itself will be engulfed in a few seconds if I don't do something! First instinct is of course to throw it to the ground and stomp on it. The surrounding foliage is fairly green, but the breeze is stiff enough that there's a pretty decent chance the breeze would catch it and blow it down the hill like an incendiary tumbleweed. I think its safe to say that I stared at the fire in absolute terror at this point.
I jammed it back into the smoker and grabbed a stick to push the flaming part the rest of the way in. Closed the top with great relief that the incident was contained.

At least it then provided ample smoke for me to distribute to the bees. 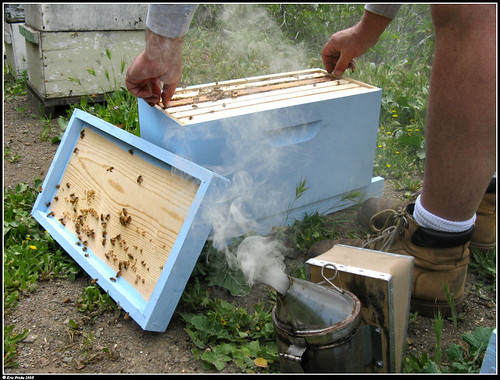