I thought it was rain water.

I mean, I'd let a bunch of the gallon jugs that had formerly contained jug-wine (before I turned it into brandy) sit outside, and it had rained recently. Sure it had a cap on it, but I'd just moved all the jugs around and have a tendency to put caps back on the jugs (because thats the best way to keep the caps and jugs together).
So I decided to take a swig of that nice fresh rainwater.

Firstlyofall, I had neglected to take into account that it had been sitting in the sun, so it was bound to be rather warm. Secondlyofall, it turns out it wasn't rainwater.

So I lift up this big gallon jug and tilt it back to give myself a nice gulp of rainwater. But instead, hello burning-hot heated brandy!!! O_O

All distilled liquor comes out crystal clear you see. The colour comes from barrel aging.

It burned like it was at least 180 proof!! Amid visions of having just consumed a dangerously high concentration of ethanol I desperately spit it out. A quick search provides nothing to support it but I thought I'd heard somewhere that drinking close to pure ethanol is dangerous and can cause that alleged blindness. Perhaps just another alcohol myth. On any account, at the time, in my shock at how much this rainwater burned, I imagined that being superheated the alcohol had somehow risen to the top and I'd consumed pure alcohol, and for a moment the thought of going blind flashed before my eyes. (I think it only tasted stronger than it was because it was hot)

But then I didn't go blind, and was left just cursing myself for neglecting to label a jug. All brandy has since been contained in the barrel (where it is already beginning to have an amber colour!).

Now, I was telling this story to the lads at work the following day, and barely had I started when they all looked at me with disgust.
"You ... were going to drink rainwater?!" ventured one of them. It was clear this was a point of shock for all of them.
"Um... yeah? Its distilled water?"
"Around here? Acid rain!!"

Seriously people. Yes I'm sure we have some pollutants in our rain. In fact, a quick search around the computer internets reveals Southern California rain can have a pH of 4.2 to 4.8 (as opposed to "natural" rain at 5.6), but I can't see any reference to bad health effects from drinking that.
Now consider, lemonade has a pH of as low as 2, and fresh apples have a pH of 3.3 to 3.9 (source and more!). The fact is, the danger of acid rain isn't that its going to dissolve your face off or is poisonous to drink. The harmful effects of acid rain almost entirely consist of the fact that it alters the pH of entire ecosystems and in extreme cases corrodes things that are constantly out in the rain. Many organisms, from fish to plants, and especially micro-organisms, cannot live in the wrong pH. The loss of some of these causes a cascade failure down the food chain and ecological devastation.
However, I'm pretty sure I've subjected the contents of my stomach to much more extreme doses of pH. Moreover, in my particular corner of the terra firma, we don't have smog and our rainstorms usually blow in from the sea.


This discussion, however, brought to mind a montage of recent memories: of every person at work refusing to even so much as smell the honey-brandy liquor I had made, of Jeremy saying he simply would not try the coffee Dave was going to make from the beans on the tree in his yard. Times like this, I can't help but think, wow, you guys are so OC.

I mean, its RAIN WATER people. 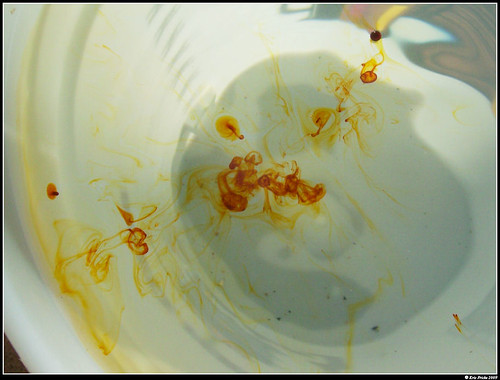 Drops of iodine seconds after being introduced into a bucket of water. Used to sterilize brewing equipment in preparation for bottling.