If you happen to be on one of the major roads into California's Central Valley during the latter part of this week, you might notice a particular migration pattern. Bees --hundreds of thousands of them-- are migrating into California's a'mond* orchards. They are not doing this by flight however, no, they are coming in on flatbed after flatbed of hiveboxes.

Almond pollinating is one of the most lucrative things you can do with bees, and 95% of almonds grow in two places: Lebanon, and California's Central Valley (and for that matter, I believe we kick Lebanon's ass in volume). Almonds need to be pollinated from February 1st through April 1st, so this week there will be a flood of beekeepers for literally several states away bringing their bees in.

Last year contracts were $125 a hive, this year they are $140 a hive. Also, there apparently are more than enough bees to go around this year.


Anyway, all this is to say, that tomorrow (Wednesday) morning I'm heeding the call of the beekeeper migration and heading up north to move some bees. Like I did last year (but hopefully without the 130 stings).


What this means for you: is (A) don't be cross with me if I don't respond to your comments for the next few days, I'll be busy editing beehives; and (B) as I tend to do on roadtrips, I'll probably actually be updating twitter. Keep an eye on http://twitter.com/arrrghonaut for the play by play (will I get stung a record number of times? will we have some completely random misadventure? You hear it first!)


* All almond farmers seem to call them a'monds, and if my experience is a guide, every single one of them will relish telling you the joke "we call them a'monds, cause we shook the eLL out of them!" But really, if you talk about almonds enough I've found you do start to drop the L. 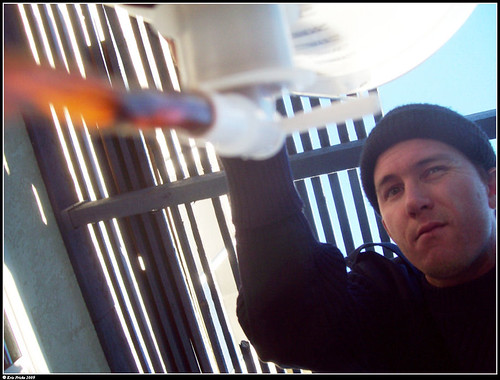 Beer shoots out of my m-----f---ing hand, because thats how I roll!
Tags: administration, beekeeping
Subscribe