The previous weekend I'd been up in San Fran for a Model UN conference. In fact I think I've been up in Nor Cal almost once every other weekend since the beginning of the year. So much so that I often haven't noted it here.
And I have some even more adventurous travel plans in the future: (1) Spain in May; (2) Epic Roadtrip 2009 -- destination TBA, but it will be epic!; (3) Turkey/Israel/Egypt in October!


Highlights from Recent SF Trip
(A) Hotel security had a noise complaint about an empty room -- trigger happy about noise much?
(B) My friend Connor, who had been most paranoid about getting in trouble, dropped a glass bottle of everclear in the lobby and it shattered. Oops. We walked quickly away and didn't get in trouble.
(C) I was at the conference with Pasadena City College (PCC). Looking for other delegations' room parties we knock on a hotel room that sounds promising. The guy who opens the door immediately looks dumbfounded. "Kris Fricke!?!" he asks. We've stumbled upon the Davis delegation. Its been at least three years since I was involved in the club there, and I don't recognize any of them but they come out and tell me how I'm still cited prominantly in their training and take pictures of me. Way to randomly feel famous while looking for a party!
(D) Everyone loved my homemade beer and rum I'd brought. <3
(E) My personal favourite moment was when my friend Nima was in the bathroom in our hotel room and I put the little ironing board perpendicularly in the hallway outside it, ie blocking the bathroom door from opening and effectively barracading Nima in the bathroom. I had a hearty laugh for about a minute and then let him out. Muahahahaha. 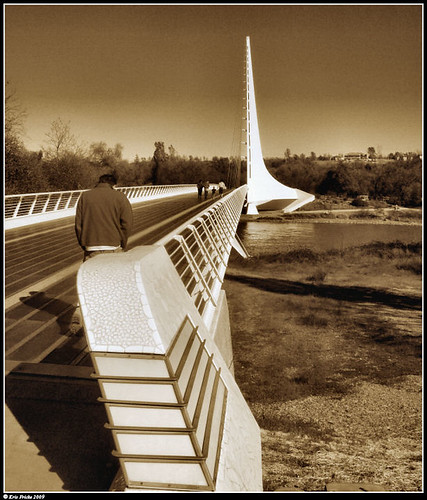 Redding Sundial Bridge (in sepiatone)
See Also: I uploaded 23 other recent pictures to flickr, check them out! (=
Tags: travels
Subscribe