Perils of the Economy of Plenty

In 1811 the Luddite movement arose with the concern that technological labour-saving innovations would deprive people of work. Of course, now nearly 200 years later, people (mostly) still have jobs. And the Luddite's are dismissed as having been ridiculous.
Back when I was an office peon in law offices, it often occured to me that nearly everything I did could probably be automated. Office automation is already a concept in use, but I really think in the not too distant future most office peons could be rendered redundant completely. And thats a fair number of jobs.
And for example, I could easily picture all the fast food workers of the world being replaced by automated fastfoodbots. In fact, I really think that its not unimaginable, and may in fact be inevitable, that most jobs today will eventually be replaced by automated systems.
And so the question is, what then, will humans do?

I see two possibilities. (A) all the humans will eventually be pushed into arts and crafts; (B) the alarmingly communist solution, and I am not a communist, but if everything was automated so there was no need for people to work, but an economy of plenty was still being served up to be consumed, it seems to me if it can be brought about that everyone owns a share of some company or other, they'd still be provided the monetary units to exchange for the products they desire. Communism through the stock market.

I'm very curious about other people's thoughts on this subject. 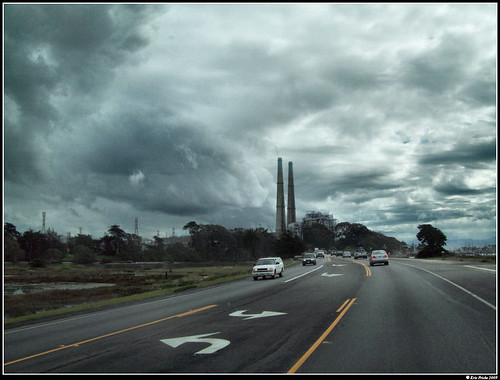 Somewhere south of Santa Cruz, after I made a hundred-mile-wrong-turn the other day
view large

See Also
(1) Nine Planets Without Intelligent Life - Not so much a "webcomic" so much as a philosophical web- graphic-novel thats takes place in a world where there's only robots left. I found scrolling through it a bit counterintuitive but once you figure that out I think its really neat.

(2) When the Aliens Arrive - Kind of a similar question to the scenario posed in this entry. Basically, what would happen if space aliens made contact and instead of just wanting to probe a few of us they wanted to provide us with an economy of plenty? Economic disaster!