Last week, a troll was taking on the reasonable people of the world over the issue of putting Africanized Bees in people's backyards (making the article in question the most commented by far on the OC Weekly site). Apparently, meanwhile, in comments to another article people were having a similar debate about whether pigeons are better than hawks (!)

"...The Pigeon is actually Columbia livia, and also known by the common name Rock Dove...ahhh much nicer already. They're originally from the cliffs of England, so they love tall buildings. LAWEEKLY ran a story a few years back about abatement services for these non-native species of animals.

Accipiter cooperii [The Cooper's Hawk] love to eat birds, and their populations are also on the rise. Since birds live outside they are all reservoirs for mosquito-spread viruses. Poor Hawk is sounding less majestic already...


Also of note is an article about an actual trial occuring in Orange County over the theft of a bottle of ketchup valued at $1.20. Good times!

And of course my letter to the editor was published. 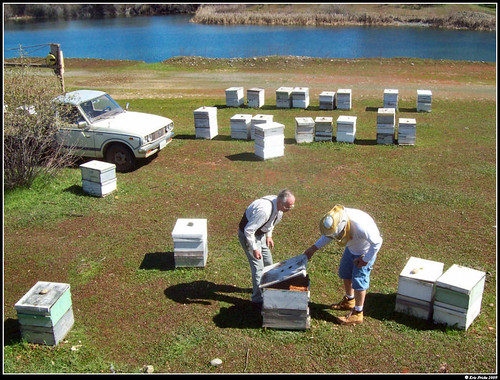 In More Beer Related News
The Bruery: Mark and I went to the Bruery on Saturday. The Bruery is a new (as of only a few months I believe) brewery in the city of Orange. It consists of nothing more than a warehouse full of brewkettles, barrels, a large industrial refridgerator, a bar with some taps, and a smattering of tables and chairs for "tasting room" guests! They make exclusively Belgian beers, and some real interesting ones at that. See below

Recent Beer Reviews
Sam Adams White Imperial - Just thought I'd get this one out of the way before the Bruery ones. I'd never heard of a "white imperial" before. I generally don't like white beers, but do like imperials, so I was very curious how I'd like it. I really suck at writing descriptors, as we know, but it's thick and tasty. Not as good as say, any dark beer, per say, but for those who don't like dark beers I'd say it might be a good bet! (but then again I don't think I'm speaking the same language as people who don't like dark beers!)
The Bruery - Melange # 3 - a combination of their imperial stout (not available individually!), a saisson, and a witbier, if I recall correctly. Amazingly good! I think I'd put it right under Bourbon County Brand Stout (which is itself under the semi-mythical Sam Adams Utopias) for best beers ever. $7.50 for half a glass is damn steep though. And they'll only sell you half a glass per visit (they claim extremely limited quantities)!! Its black and actually kind of sweet and delicious tasting. I could see how if someone thinks Bourbon County is too intense they might like this (and if they think beer should never be $250+ a bottle, thus eliminating Utopias, it might be a candidate for best beer ever!)
The Bruery - Other Beers - Eh just see here

In Conclusion: I think the Bruery is definitely worth a visit if you fancy yourself a beer connoisseur. I would gladly pay $7.50 again for a (half) glass of Melange #3 and I recommend you try it.