I feel like the tables have been turned on me.

As you may have gathered, I'm a beekeeper. And when I'm not a beekeeper, I'm usually doing PR stuff for a bee control company. That in itself is kind of ironic. I either keep bees alive or advocate killing bees.
Not that I don't agree with the company stance. If bees are in a harmless location where they don't pose a danger to people or structure the company lays it out there that removing them isn't necessary. Unfortunately most wild bees around here ARE to some degree Africanized though so there's always the concern something could set them off. We very frequently encourage people not to have their wasps removed though (wasps are actually very undefensive and are beneficial -- they eat a lot of garden pests). So I don't really have a problem conveying the company message.

The other day, however, we discovered a colony of wild bees in an archway by my front door. "Aww, my friends!" I exclaimed. I found them to be a cheery greeting upon entering or leaving the house.
However, they do pose a threat to passersby and the integrity of the structure. Or so I'm told, I still don't want to believe it. /= But I guess we're going to have to do what I'd probably advocate at work -- these bees need to go. It's not as easy when it's up close and personal. )=


And THEN, the following day (yesterday) three of the four technicians had to be in court. To ease the load on the one techinician we'd therefore have out in the field the decision was made that I would go out in a Bee Busters truck and bust swarms. So within 24 hours I'm suddenly faced with the feeling responsible for the decision to destroy a bee colony AND for actually doing it (not both at once, however, fortunately)) 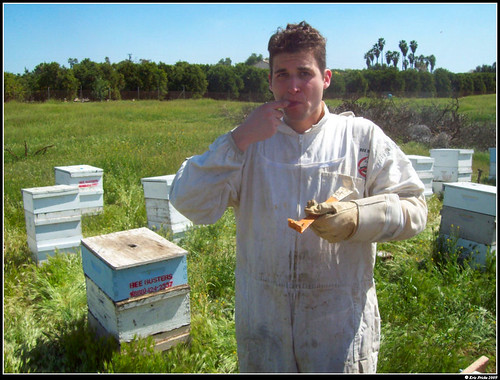 My cousin Tim tries some of the freshest honey you can get
Tags: beebusters
Subscribe