A month and a half ago Mark and I made an imperial stout (ie dark strong beer). We then placed most of it in my barrel, which I had been filled with homemade rum until immediately prior (rum is now in a Gallo wine jug). The barrel, obviously, still had rum soaked into the wood. We let the beer age in this barrel for about a month. Saturday we bottled it.

Even warm and uncarbonated, the beer tasted like awesome! We mixed priming sugar with it as we bottled it, so it will ferment just enough more over the next two weeks to become carbonated. I am extremely excited about how it is going to be when we try it cold and carbonated. This is a beer we can be proud to take to a brew club gathering.


And then Mark opened a bottle of the belgian ale he had made while he was gone. He aged this one with oak chips (theoretically giving the barrel age effect without the barrel), and had mixed in orange peels and some other things. It had fermented so hard it blew the lid off his bucket.
This beer also tasted fantastic! Our first batch I'm not gonna lie had been kind of dubious. The second one was barely passable. After that we got pretty good. The oatmeal cream stout I'd made was downright good, but it was, after all, only following a recipe. I feel these last two beers we made though, we could win contests with!


When Things Go Wrong
Mark reported to me that while I was gone, he was making a barleywine (a really strong beer). One Friday evening just before he went out he decided to check on it. He noticed that the fermentation lock (the valve on top that lets air out but not in, so it doesn't build up pressure but unwanted bacteria doesn't get in) had blocked up. So he pulled it out to clean it.
As soon as he got it loose however it shot out and yeast gunk shot everywhere, covering him and the surrounding area. Unable to see because he had gunk in his eyes he had to feel his way to the kitchen sink to clean off. Once he was able to see again he could see green handprints all over the walls where he had felt his way to the kitchen. And of course now he had a fantastic mess to clean up. Good times.
Moral of the story: make sure you're fermentation lock doesn't clog!! (and if it does, be very careful opening it?) 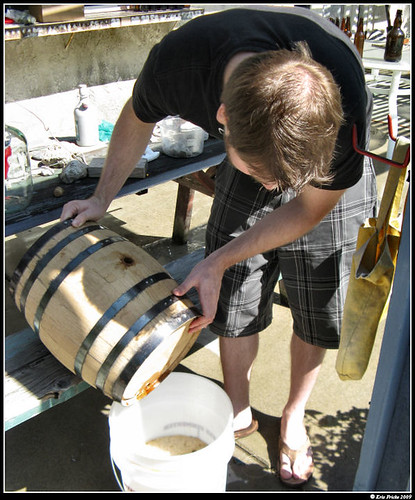 And more pictures of light refracted through bottles because I can never resist
Tags: brewing
Subscribe