Okay it's Friday evening, and who are we kidding, no one is going to be on livejournal until AFTER all the scandalous entries of Friday night happenings have occurred. Either that or you're going to be playing nethack all night until you're delirious (lord knows that's what I'D be doing if I wasn't so keen on showing off my beer :D )


The weekend is always the doldrums of livejournal. No one updates (which is weird because the lazy morning hours of Sat and Sun what else are you going to do? Why aren't the rest of you telling your scandalous entries of Friday/Saturday night happenings??), and if you update, no one will comment. (well there's actually a window around noon on Sat morning). So it's best not to waste an entry on a weekend. But.... then 30 in 30 comes along and hey I don't make the rules...

And so I'm left with a particularly difficult dilemma. I want to make an entry that's interesting enough to qualify as worth reading (I think I may have accomplished that once...), but I don't want to waste an idea I regard as really good to the hopeless morass that is the blogosphere on weekends. So I find myself trying to dial in to a very very specific window of good enough to post but only barely.

Two solutions I've though of other than writing purposefully crummy entries:
(a) guest entries! that was fun no? nice change of pace for the weekend. I have the legendary

shid (from 30 in 30 II or some such ancient times) lined up for one at some point. Any other volunteers welcome.
(b) rehabilitate entries from more than ancient times that were already posted in this LJ. Being as some 300 or so of you are new to this lj this year (: I have plenty of entries that would be new to you if reposted... I mean, don't you want to know which US President had a dog named Sweet Lips? Or read my entry about experimenting with controlling substances? ;D


Anyway, for now I'm whipping out a simple little story of a prank I pulled yesterday, with photographic evidence: 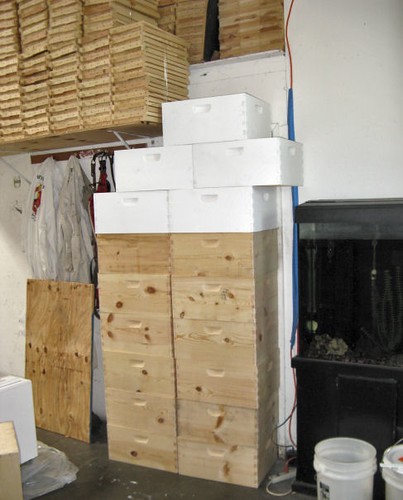 Behind those beehives is actually a door. The only door to a room in which my coworker Jeremy was at the time bottling honey.

...bastard denied me satisfaction by acting completely nonchalant when he opened the door to find a wall. ):!


Earthquake!!!
In other news, while I was writing this I experienced an earthquake!!! Typical.
Tags: earthquakes, meta, pranks
Subscribe