People are funny. They do a lot of things just because other people are doing them, and sometimes they don't do things specifically because other people do them. Once upon a time I wondered why suspenders ever went out of style and looked it up. Turns out it was better fitting pants around the turn of the century ... and the fact that women started wearing them so men abandoned them. Apparently men had worn their hair long for most of history, until the first world war -- then if you were drafted you had your hair shorn short (for lice) and if you had long hair you were a suspicious draft dodging hippie (not that hippies had been invented yet), and that perception continues today even though it's long since no longer suspiciously abnormal not to serve time in the army.

I like to wear combat boots. I like having a single pair of shoes that I can wear hiking, out and about, slogging through snow, or polish up and wear when I'm trying to look dashing. Specifically I wear paratrooper boots for a variety of reasons (to protect against landing in a swamp and getting a boot full of water, they are higher and more watertight, which for me means better protection against bees).
When I first showed up with them at work the lads teased me a little about my alleged "stormtrooper" boots. They all wear standard work boots. And you know what? They all get stung in the ankles.
When I work with my boss doing something intensive in the bee yard, every single time he has to wrap duct tape around his ankles, because work boots and bee suits don't overlap enough (seriously look at this - he does that ever time). I've never gotten stung in the ankle.

The other counter argument they've made against my boots is that my boots are black rather than brown. Bees are definitely more attracted to black when they're on the war path (it's the colour of a bear's nose, the only vulnerability on the beast), so they say "yeah have fun with all the bees swarming your feet." And you know what? They're right, when the bees are all good and stirred up I look down and my feet may be veritably covered in bees. But the way I see it, every bee on my boot isn't a bee on my face, and I've never been stung through my boot.

Really, to me, tall black boots make so much MORE sense than small tan boots, that I think the only reason they DON'T wear boots more like mine is because such boots are suspiciously punkish. They are Good Hard Working Working-Class Americans, and they wear Working Class Boots. Yeah have fun getting stung in the ankles guys.

Last time we went out to the bees Dave finally had enough of getting dozens of stings in the ankles while remain entirely unscathed, and ordered a pair of paratrooper boots himself.
They arrived yesterday, and the lads all made fun of him. 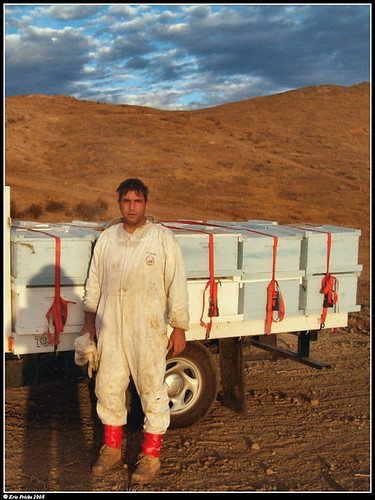