Previous to getting into professional beekeeping, if I were to picture a beekeeper, I would have pictured a gentle nature-loving individual lovingly taking care of a few dozen beehives in a picturesque meadow.
My first impression upon arriving at a "real" commercial bee yard? A vast muddy yard that smelled of diesel and was filled with rows and rows of hundreds of beehives. The head beekeeper was already drunk when we got there because he wasn't expecting us (it was early evening) and a number of farmhands in bee suits were hurriedly checking hives under the watchful eye of a supervisor. I nearly lost my boots in the thick mud as we unloaded our hives (this was a staging area for hives going out to pollination) and the aforementioned head beekeeper cursed a blue streak as he got stung (but didn't bother putting on any protective gear) ... and if I hesitated for a second some profanity might be directed toward me for motivation. I had about 130 stings by the time the night was over. It was not exactly what I expected.

The thing with beekeeping is that there are two things which most distinguish it from most other career paths. Beekeepers don't have to deal directly with people very much, and beekeepers must basically laugh at pain. These two things ensure that by and large, professional beekeepers are grizzly old men who don't necessarily like working with other people and think getting stung a few dozen times in the face is just another day at work.

My boss, Dave, is pretty crazy, but I get the impression that's about par for the course. That guy Mike we had working for us for awhile had some interesting stories about his old boss, which make Dave sound mundane in comparison.
Apparently on one occasion he drove past another bee yard and decided to stop by and check it out. Little did he know the owner of the bee yard happened to be nearby with a shot gun ... received a shot gun blast in the chest (at range, so it didn't like, you know, kill him) before he could escape.
Sounds a bit crazy, but beehive rustling is actually a serious issue. Just a few months ago there was a news item about a beekeeper killing another while stealing his hives in Australia. Dave once had several hundred hives stolen, only to receive a call months later from a sheriff in Oklahoma saying they'd found beehives with his phone number on them there. They actually make tracking devices you can hide in your hives to guard against this. We don't do that but we do have theft insurance on our hives.

On another occasion Mike's former boss got bit by a rattlesnake while working the bees. He continued working for another hour or two until he was done before going to the hospital. There he was informed that at this point too much time had passed for the hospital to do anything about it.. BUT because this particular rattlesnake has a venom similar to bee venom, it was barely having an effect on him due to the tolerance he'd built up.

The beekeeper in Redding we've bought a lot of hives from is semi-retired now because he's lost too many fingers making his own equipment. At convention someone mentioned that back when most beekeepers made all their own equipment it wasn't uncommon for half the people at convention to be missing fingers. Now fortunately there are professional woodshops we can order equipment from and keep all our own fingers. We keep our friends at Shastina Mills in business so that Dave can continue to use his middle finger as a critical element of his driving technique.


So yeah, the world of professional beekeeping is kind of the wild west. Hobbyist beekeeping however does tend to be more along the lines of nature-loving individuals lovingly tending to a handful of hives.

Upon my return to the muddy pollination yard I started out in, the grizzly beekeeper there was clearly impressed that I was still around after the stinging I got last time. And then thinking back to my lack of sympathy for that guy Mike when he couldn't work through his alleged "forty stings," I start to worry that I'm halfway to becoming a grizzly old beekeeper myself. But at least with our newest bee yard locations, I finally have my picturesque meadow. 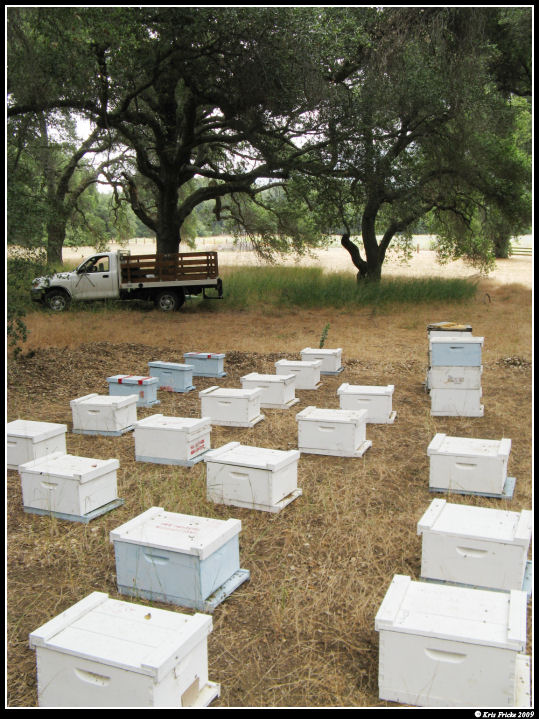